The ex-job has gotten some Tacca chantrieri plants in, in bud. They're surprisingly big, maybe three feet (0.9 m) tall, with multiple flowers and buds. I didn't get any pictures of the whole plant, because when I was thinking of it, there were people in the way, and then when there weren't people in the way anymore, I forgot I'd intended to. But I did at least get photos of the flowers.

The plants themselves have big, broad, green leaves with maybe a slight iridescent/metallic shine to them. (See davesgarden.com pics here and here.) If you didn't know what they were, you'd probably guess a new variety of peace lily. Like peace lilies, they're still attractive when not in flower. 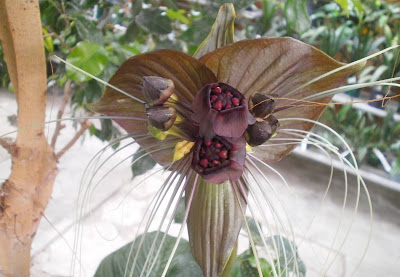 We never get them for sale around here -- these are the first ones I've seen in the area, as far as I can remember, in the three or four years that I've been going around to look at different garden centers -- and these weren't too ridiculously priced. I don't remember how much they were, but it wasn't outrageous. I was, however, not even a little bit tempted, because my understanding is that they're fussy as hell.

WCW had one, or maybe two, plants that she brought from home to overwinter in the greenhouse a couple years ago. They didn't make it, and if I remember correctly it wasn't the first time she'd tried. If WCW can't grow something, the odds are very good that I can't either, so I wasn't tempted at all. 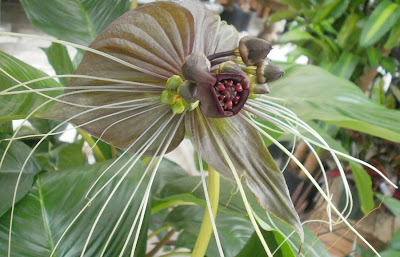 There are at least three other Tacca species: T. integrifolia is also occasionally cultivated as a houseplant, and then davesgarden.com also lists T. nivea and T. leontopetaloides. They all have the same structural plan for the flowers: three large bracts, a bunch of "whiskers" extending out and down, and then a batch of true flowers in the middle of the whole thing. None of the pictures in this post show the true flowers completely opened: they're all flexed back away from the flowers' centers, which are the weird things with the red balls in them.

The genus is also of interest to me for being one of very few words that a person can spell using only the letters of the bases in DNA, which are A, C, G, and T. You can spell a, at, cat, tag, gaga, act, tact, and that's about it for real everyday words. Caca, maybe, if you include Spanish words. Tata or Ta-ta if slang's allowed. GATT if we permit acronyms. 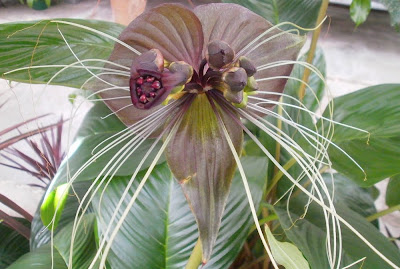 Tacca also works, for a fifth letter, and if movie titles are permitted then you can get as far as the seven-letter Gattaca (which wasn't a word until the movie, but I think it counts now) before you hit a wall.

So if anybody discovers a fifth species of Tacca, I would very much appreciate it if they would name it Tacca gaga, Tacca gattaca, Tacca attacca (TACK-ah ah-TACK-ah), Tacca gagaccat (TACK-ah GAH-gah-cat -- which would also be a palindrome, for triple cool points), or something along those lines. I can be flexible on the exact name; I just care about the letters.

I thank the Tacca taxonomists of the world for their time and attention.

Tat is used often in "tit for tat" but also often used in English English slang for worthless materials or products.

a. A rag; also (in sing.), poorly made or tasteless clothes. Hence, a shabby person, a slut.

Gat is also two real words though seldom used if not in Kent or the antique weapons trade.

Gag seems to lately have become jargon for journalists and fetishists but is still a proper word.

Like most people I have mixed feelings about the Tacca. Fascinating but...

Nice! How about naming one Tacca "Gingerbread"? I always wanted to name a plant "Gingerbread". That and "Sicilian Hillside".

"Caga" is also the imperative verb form of "caca".

I acquired seeds of some somehow. They didn't germinate. Such is the life. Beautiful flowers, however! Love me some whiskers. :P

Oops, I forgot to credit the Oxford English Dictionary for the definition of "tat".

Example of use: "What on Earth possessed you to pay money for that piece of tat?"

Kenneth, I had a look at your blog. It was fascinating but I couldn't post a comment because I am a creepy anonymous lurker in the shadows. However I thought you might like to know about the doubtful plant in "Foodie Fights: Weed Pizza":

That is not chickweed (Stellaria) or related to it. It is one of the Asteraceae, the lettuce, artichoke, thistle, dandelion, etc. family not the Caryophyllaceae, pinks and campions. It looks very like Galinsoga but I am not familiar with US weeds. If it is Galinsoga then wikipedia claims it has been eaten before. Not many of the Asteraceae are lethal poisons :)

I hope Mr Subjunctive doesn't mind my hijacking his blog for chatting to others.

Oh man Oh man, I've always wanted to try one of these after seeing it in a catalog. I'll have to check it out tomorrow.

Oh damn that is spectacular!!

I want one of those!!

Pat: You don't have to be into antiques to call it a Gat. As in much gangsta rap, or in MDC's great militant veg rant "Time to Get My Gat."

Daphne, that is interesting.

There was a news report today that Facebook is promoting British dialect words. Apparently people write quickly and without thinking too deeply so don't adjust their native words for the ease of the reader. I am well chuffed, duck.

"tat" is a legitimate word. It's verb that means "to twist around". "Tatting" is to make a kind of knotted lace.