This is the first post I've written in quite a while, because I've been on a partial vacation from PATSP for the last week and a half. I consistently start feeling a slight case of burnout coming on about a month before a hiatus (next hiatus will be late September), so this time I just wrote a bunch of posts in advance and took a break from trying to write any more. This means, among other things, that I'm no closer to having the Aloe vera1 profile done than I was ten days ago. (UPDATE: But it still got finished.) 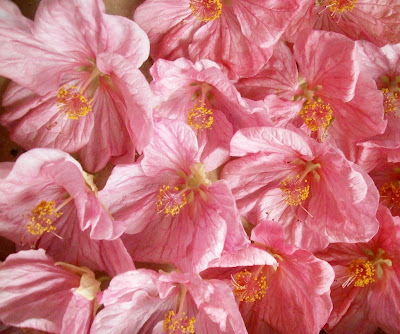 This will be explained.
However, on the glass-is-half-full side, I used some of the time constructively, attacking the considerable backlog of photos I'd accumulated (rough estimate: 2500-3500 individual photos of 750-1000 different subjects), and actually managed to deal with 2/3 of them, which had the pleasant burnout-reducing side effect of suggesting new topics for future posts. Which posts, once written, will in turn lead me back to burnout, later on. It's the Circle of Blogging. There should be a song.

Maybe not that song.

Anyway. I also had time for updating and slightly reworking the plant list, doing a full round of watering, going back in the archives to add links to recently-posted plant profiles, and playing a moderate amount of Sim City 4. I knew blogging took up a lot of time, but damn.

The actual subject of today's post was discovered during the plant-watering. 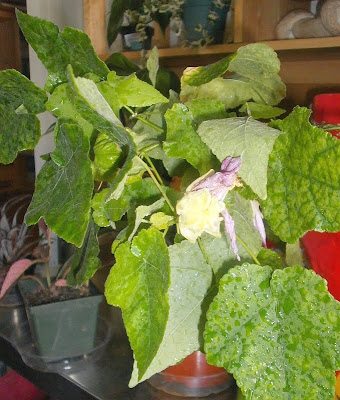 It's an Abutilon seed pod. I've never had one before, because for a long time, the only Abutilon I had was 'Bella Pink,' which is apparently not self-compatible. I bought 'Bella Vanilla' and 'Bella Red' at the start of the summer (late May), and tried to cross them both with 'Pink' when I first got them home, by mashing stamens and pistils together kind of sloppily, but nothing appeared to happen, and then 'Red' and 'Vanilla' both stopped flowering for several months, and I tried cutting 'Pink' back so I could propagate cuttings of it, so I couldn't try again until they all decided to flower again. (Which actually hasn't happened yet, though 'Pink' has been blooming for quite a while, and both the other two have buds now. I've had buds develop to a certain point and then drop before, so this doesn't necessarily mean I'll get new flowers, but in theory it's just a matter of time, right?) 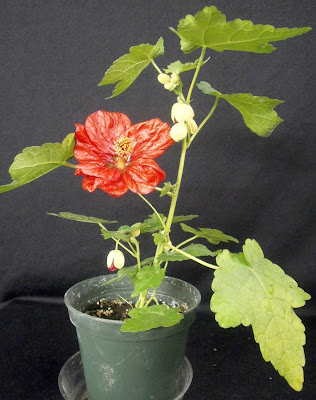 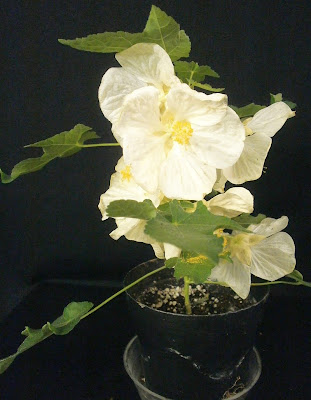 Abutilon 'Bella Vanilla.'
And that was where things stood until this last round of watering, which shows me that at least one of the crosses I tried actually did work, and at some point I should have seeds. Which is awfully exciting, since the attempt to propagate from cuttings was a complete disaster. Everybody says that Abutilons are the easiest plants to propagate from cuttings, you just take a piece off and stick it in the ground and away you go, but in my case, I took the pieces off and stuck them in potting mix and then watched as they all shriveled up and died within a week. Which made me very, very angry. (On the positive side, though, I got the first picture in this post by putting all the flowers that I took off of the cuttings together in a box. May or may not be pretty, but it's different.)

People say the seeds are easy too, so maybe nothing will come of me having seeds either, but at least I get to try. I'm pleased. 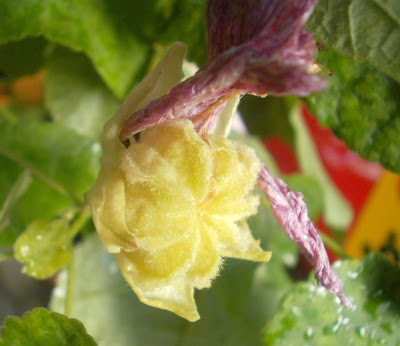 -
1 I guess it really is called Aloe vera, not Aloe barbadensis. That's what GRIN says. Whatever is technically correct at the moment, there's so much confusion on the subject that I think I'm okay choosing the one that's faster to type. And everybody knows it as A. vera, so.
Posted by mr_subjunctive at 2:30 AM

I guess it's just because I'm a nosey person, but I like the picture of your plants in situ, rather than against the black background. The second one in today's post shows what an excellent plant husbandman you are: clean saucers!

Good luck with the seeds! The way I see it, blogging takes up the time that I would have spent on computer games before I started. There was this horrible game called maplestory that took up all my time!

Good luck with the seeds! In my experience they really are super easy - All the Abutilons I ever had were grown from seed and the cuttings never worked for me either. In fact, there are little Abutilon seedlings coming up in the pots of most of the plants that have stood near my red-flowered Abutilon due to a lapse in deadheading that resulted in half a dozen seed pods scattering their seeds all over the place. They ripen and crack open rather suddenly so you might want to keep a close watch on yours!

Yes, soooo easy. *eyeroll* I don't even want to count how many cuttings I lost last winter. Including a gorgeous dark red variety.
I had better results with water-rooting (and plenty of light, that was probably the biggest part of my problem), so I'll try again when I bring the plants in for winter and have to cut them back. The ones I had this spring sold well at the flea market.

Why aren't we BFFs? I love 1) abutilons and 2) SC4. I don't play it because I think Windows Vista would crash, but I still dream about it and strategize in my head. I think I still have the CD for SC3 around here somewhere. WITH the expansion pack.

Haven't heard of it, but I know the feeling. Sims, Sims 2, and Sim City 4 have taken, between them, huge chunks of my life away. Since I started blogging, I mostly don't have time to play either one (and in fact I actually uninstalled Sims 2 on my computer a while back because it was becoming obvious that I wasn't going to play it again). I sort of still wish I could, and sort of don't. Sim City 4 is better, in that I can start and stop playing easier.

With Sims, I had downloaded so much custom content from the internet that it took 45-60 minutes just to load my game, and then of course it got very slow when I tried to do anything.

They change color first or something, though, right? The only Abutilon I've seen seed pods on before was velvetleaf (A. theophrasti), and for that one they go brown and dead looking first. I was hoping that 'Bella Pink' will do the same thing?

Well, mine had plenty of light (they got a choice spot under artificial light, where I'd been growing Crassula ovata), so that wasn't the problem. I didn't try water-rooting, though I did put them in water for a few days initially. Don't remember why, but it made sense at the time.

Geez. I thought we already were BFFs.

I've not seen that movie. Heard lots about it, of course, including that maybe it was kinda racist. And I was like, it's Disney, of course it is. But OMG, that was f-ing disgusting. Thanks for sharing that so I don't ever go into the whole thing, at least not unprepared.

I did see it once, I think. Or maybe it was just a really long trailer, or Disney saturation-bombing ABC with ads to promote it. It feels like I must have actually seen it, because I remember enough of the scenes and characters (if not the plot), but I can't imagine any circumstances that would have led me to do so, so I don't know. In any case I'm not qualified to speak to the racism charges, but as you say, it's Disney, so no doubt there's something.

I didn't actually watch the entire video I posted, technically -- I made it about two minutes in and then I was like this is boring, I really don't need to see all of this. Also I think I want a Pop Tart. So I stopped. Sort of a long way to go for just the joke, I recognize. Sorry.

I just bumped into this news item. A blue(-ish) Hibiscus to covet but it is unavailable as yet.

Could anyone please tell me how large abutilon seeds are? I am making a project including seed cards for a client and don't want to buy seeds that are too big. Thanks.

They're about the dimensions of sesame seeds, possibly a little bit smaller.

Thank you very much Mr Subjunctive!