Question for the Hive Mind: Cactus in Iowa!

I was walking Sheba last week when I spotted a cactus. Outside. Planted in the ground. This isn't supposed to happen: as everybody knows, cacti belong in the Desert Southwest, not in Iowa. Still, though, there it was. 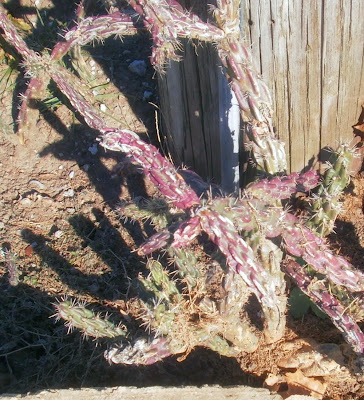 I'd heard before that every one of the Lower 48 U.S. States has at least one native cactus species, so I went to Google to find out if this is Iowa's. Google and Wikipedia combine to tell me there's only one, Opuntia humifusa, the native range of which actually covers most of the eastern U.S., from Montana south to New Mexico and then east into southern Ontario, Massachusetts, and Florida. (There's some disagreement about this, though a Canadian government site which I neglected to bookmark confirms that the plant's range extends north into Ontario, though it's endangered in Ontario.)

This plant I found isn't O. humifusa, but after a bit more Googling, I ran across a list of cacti which are supposed to be hardy in zone 5, and I'm thinking the plant in question might be Cylindropuntia imbricata. Or at least that's the only one on the list that looks remotely similar. 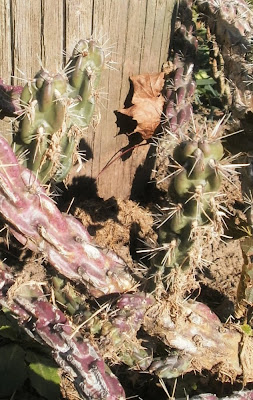 Since I've only seen it the one time, we don't actually know that it's hardy here, of course, but I'd assume that if it weren't hardy in zone 5, whoever got it wouldn't have planted it in the ground, or they would have dug it up before it started getting cold. Since it's still there in early November, I'm guessing it's going to stay there through the winter. If anybody can confirm the ID, or offer an alternate one -- and yes, I am aware that the pictures aren't great and the plant is maybe not an ideal specimen -- I would appreciate it.

I can't confirm the species, but it sure looks like some kind of cholla (Cylindropuntia) to me.

My first guess is a buckhorn cholla since that's the only type I'm familiar with that's purple-y like that.

The colours have changed to match the hue of the cactus in question.

I know nothing of cacti, however, so I'd be no aid!

I agree with C. imbricata. I've seen them grow in Idaho along with other opuntioids. They look very crappy in winter, but if they survive, then the new growth looks good. Snow helps, acting as an insulator. Check for blooms next year for a more certain ID.

I think you're probably right with your ID. I can't say for sure, for sure, because most chollas look the same to me.

Your photo looks like you could've taken it in my neighborhood. Which is pretty cool.

It's definitely some sort of cholla, I don't know the various variaties, but around here they survive fine down to 10 below at least. All the cacti around here turn either purple or red in cold weather, but they will return to green during the summer. It's kind of like a reverse tan for them I guess. Cold instead of sun - but the skin of it will only die out if it turns black.

Can't ID it down to the species, and everyone above pretty much said what I would've said.

So, I'll just regale you with an anecdote. One of my neighbor's one year planted an impressive collection of cacti in their yard. Not surprisingly those agaves never came back.

The O. humifusa while not abundant, can be regularly spotted around Chicago. Although, most places that grow it are serious cacti-loving' gardeners, Mexican immigrants and conservatories and public gardens.

Also gonna guess C. imbricata. I'm not really sure where it's native to but it seems like the most popular hardy opuntioid after O. Humifusa.

haha, as soon as I read "I'd heard before that every one of the Lower 48 U.S. States has at least one native cactus species" I thought "yeah, it's called prickly pear." it's nice to know random facts once in awhile.

That's awesome! I remember seeing an Opuntia back in Wisconsin that could deal with Winter.

Definitely C. imbricata. It's just about the only cholla that would do well that far north. They tend to purple up for the cold weather, it'll green up in the spring.

As long as the soil is well-drained around the roots it should do fine. Notice that many cacti taht live in cold climates shrivel-up in winter. This is to concentrate the liquid in the cells so they won't burst in the cold. They get fat again when the weather is warm.