I got an e-mail last Friday that read, in part,

. . . do you have an idea what the plant in the attached pictures might be? It was given to me by a friend, who is quite certain that the plant salesman described it as a haiacanthus, and that its Dutch name is poederdons ('powder puff'). However, a plant listening to these names (in any spelling variety) does not seem to exist in the internets.

The question was accompanied by five photos, three of which are below. They'll all blow up much larger if opened in a separate window. 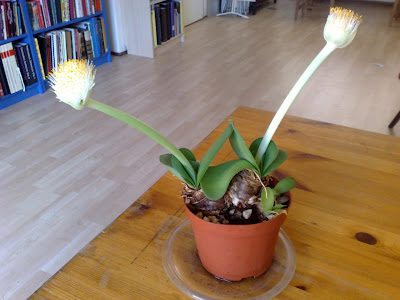 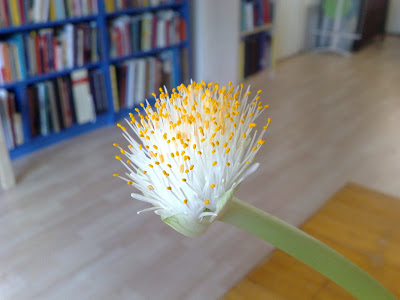 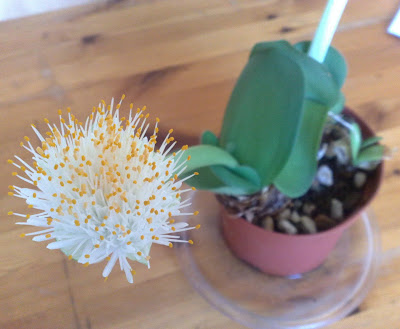 As the e-mailer says, there's nothing by the name Haiacanthus on-line, nor did trying variations on the spelling help. The only similar flowers I could think of were for stuff like Acacia, Mimosa, and Calliandra, and they all have pinnate leaves, so I don't think that's the right neighborhood to be trying.

So I bring it to the readers. Does anyone know what this is, or know of any succulents or cauduciforms (it looks like a caudex-former to me, anyway) that have flowers like this? 'Cause I am completely stumped.

UPDATE: Has been identified as Haemanthus albiflos in comments. I would never have come up with that on my own in a year of Googling (though I did think at one point that maybe it could be in the Amaryllidaceae, because of the leaves, I didn't follow up on it), and now I want one. Added it to the want list in the sidebar and everything.

Thanks to Don, John de la Parra, and College Gardener!

See the pic at

I am pretty sure that is a Haemanthus albiflos (See Wikipedia article http://en.wikipedia.org/wiki/Haemanthus_albiflos). My great-aunt in Germany has been growing these for decades and I also had one for a few years before moving to the US. They are great - almost carefree and yet they produce pretty flowers.

The ones I have seen here in the UK are probably provided by the Dutch houseplant glassfarms as well. All the ones I remember are the red forms, it seems a bit weird to see a white Blood Flower.

First time I've seen this plant! I would have said perhaps some sort of Allium if not for the Amaryllis-like leaves. Very neat!

Fascinating. I've never seen anything like this before...and now *I* want one too!

We had some in the UWO greenhouses. Never seen it anywhere else in cultivation before though.

I got a pot of bulbs from my parent's neighbors back in the early '80s, and it went... somewhere... but I managed to hold on to some starts and currently have a pot of three bulbs. It can be propagated from leaf cuttings, much like peperomia, but they are slow growers. The little plants are sweet miniatures of the mature plants, so if that's all you can find, go for it. They're easy, tolerant of spaced waterings, don't need bright light (mine has been in a unobstructed north window for the last several years) and I've never had pest problems. Can't remember the last time it bloomed (probably the light), but I grow it just for the foliage.

Many thanks for your help, dear commenters!
Best wishes from the Netherlands
from the proud owner of a now-identified Haemanthus Albiflos.

We had some of those at the ex-job. Never saw them in flower, though.

Haemanthus katharinae is easier. It dies down in the fall and sprouts in the spring. 5 months where it doesn't need anything:

I never found them difficult, and they are really pretty even if not in bloom since their leaves have a fine silvery down. With some, it is just one line of hair around the edges. Basically, I treat them like succulents and keep them as cool and dry as I can in the winter.

Just found this plant in a outdoor museum in Aarhus, Denmark. They had a full glasshouse built and decorated like in the 19th century, and it was full with house plants from that time. They also propagate and sell those plants. I got myself 4 small bulbils of Ornithogalum caudatum just by asking. :) If you ever go there, the place is definitely worth visiting. It's just next to the botanical gardens. Too bad the greenhouses are under renovation, and won't open until autumn 2012, so i missed them.