If I were going to write a plant profile on Lenophyllum texanum, I think I'd go with "Stalker" for the person, because it's a weird creepy plant that's always winding up in other plants' pots but has few redeeming qualities of its own. It's like, if plants could talk, this plant would always be saying JUST GO OUT WITH ME THIS ONE TIME AND I'LL LEAVE YOU ALONE FOREVER I PROMISE.

I talked about it in the Bryophyllum daigremontianum profile without knowing that I was talking about a different plant: both B. daigremontianum and L. texanum reproduce by dropping bits of themselves off of a parent plant: for Bryophyllum, the bits are plantlets, and for Lenophyllum, they're leaves. In either case, at work, they tended to land in the same pots as cacti, where they grew more or less unperturbed, because nobody wanted to risk getting stuck by the cacti in the process of removing the weeds. 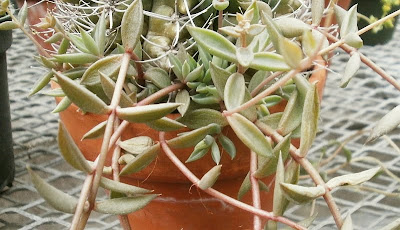 Much like this, actually.
But I'm not going to write a profile about Lenophyllum texanum, because I haven't actually tried to grow it on purpose. Maybe it actually is a nice guy, deep down, and we'd be very happy together, but I'm not willing to risk finding it popping up in all the other plants' pots around the house for the next seven or eight years. That position has already been filled, by Sedum morganianum1 and S. x rubrotinctum.2

It turns out that L. texanum really does have at least one redeeming quality, if you leave it to its own devices for long enough, which is: there are flowers. 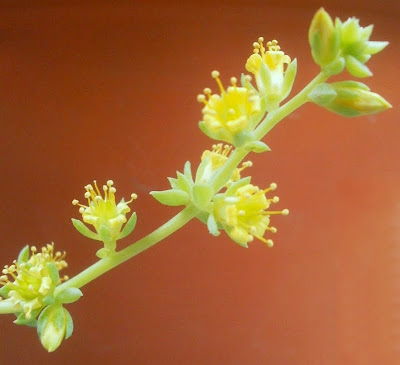 They're not huge or gorgeous or pleasantly-scented or anything, and I don't know how often they bloom (these pictures were taken at the ex-job in mid-November), or for how long, but now I'm feeling a little bit bad that I didn't let a Lenophyllum go wild just once at the ex-job, to see what it would do. And who knows what other really cool things I never got to see because I was all busy with the "working" and the "talking to customers" and "earning a paycheck" and everything. 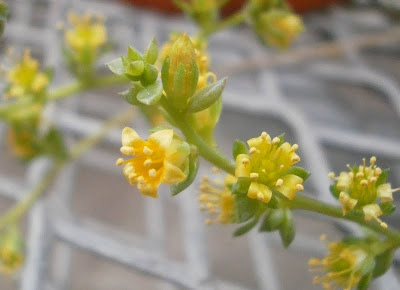 But, you know. I was young and stupid then.

I still don't want to grow L. texanum myself -- you'll notice that even when it's getting enough light to flower, it's still kind of gangly and awkward, and the leaf-droppage problem would be an issue regardless -- but hey! It has redeeming qualities! Party on, Lenophyllum texanum! 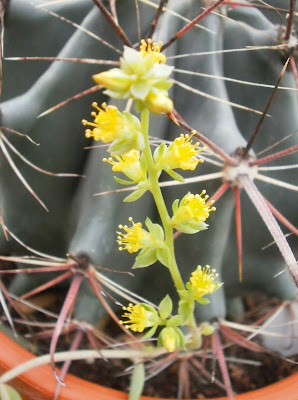 -
1 Which I encourage, because S. morganianum is frequently cooler than the plants whose pots it is hijacking.
2 Which is less welcome, but better now that I know it has to be under extreme -- like, MOUNTAIN-DEW! extreme -- artificial light if I want it to look good and do well. We may yet be able to reach an agreement.
Posted by mr_subjunctive at 2:30 AM

So that's what that weed is. I always thought it was a senecio.

I'll bet that cactus wishes he could call the police about the squatter in his house.