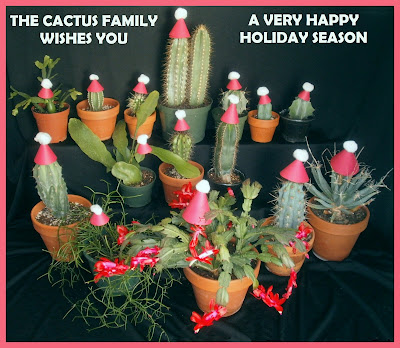 I was hoping to make this, like, a regular thing, after doing the first one back in 2008 (when it was the Aroid Family with bows, rather than the Cactus Family with Santa hats), but for reasons I no longer recall, it didn't work out last year, so the tradition kind of stopped before it got started.

But a few weeks ago, I was thinking of Santa hats for some reason, and it occurred to me that I could make my own tiny, plant-sized ones from construction paper and cotton balls. One thing led to another, and a couple hours later, I was taking the above picture. I have no idea what I'll do next year. (Maybe I could knit a bunch of little Christmas sweaters?)

This also begins the winter hiatus. As in 2008, I wish my readers a (in some cases retroactive) happy Christmas, Hanukkah, Kwanzaa, Winter Solstice, Gurnenthar's Ascendance, Festivus, Boxing Day Eve, Cephalopodmas, Monkey, mundane but not-unpleasant day of no particular significance, or combination of the above, in accordance with your religious beliefs and preferences or lack thereof.

PATSP will return on 26 December.

A Merry mundane but not-unpleasant day of no particular significance to you and yours! Have fun!

Happy holidays, and enjoy your hiatus!

Happy holidays, Mr. S. Have a good rest. (Cute holiday photo, by the way. I like.)

You, sir, are too good to us. Those are quite the festive cacti! I hope you have a wonderful hiatus and/or whatever happens to fall within/without of it in terms of holidays.

I hope the Santa cacti bring you presents, or at least do the watering for you! Happy Holidays!

ha ha! The cactus are great.

Have a happy holiday

Is that E.oxypetallum the one you got in a trade? (from me?)
It is growing good!!

Sweaters have been done already:
http://erika.fisherking.org/?page_id=271

Have a Happy Hiatus and a Merry Whatever! :)

Just as well. I don't know how I'd get them on and off. And I've never knit anything more complicated than blankets (K 1 row, P 1 row) before, so that's a problem too.

Dude. That is hilarious.

I knit too, btw. It's always nice to run into a guy who does needlework. Society really needs to get over thinking that needlework is just for women.

Well, society needs to get over a lot of things, actually, but yeah. I haven't knit anything in a long time, though, because the plants and blog don't leave time for much else.

I'm amazed at the work you put into it. Merry Cacti indeed!

I have to agree with CelticRose, scarves are quite easy - no more than small blankets, after all.

I've finally started to knit again after almost a year, and it's so much fun!

LOL. This is the best holiday card I've seen this year.