They Grow Up So Fast, Part 2

Every once in a while, I wind up looking through the photo archives for something or another, and happen upon an old photo of a plant I still have, and am surprised by how much different it looks now. It should be hard to forget that plants grow. This is, after all, much of the point of having them, and one is regularly having to repot or prune or whatever. At the same time, it's easy to forget that it's going on at any particular moment, especially with slow-growing plants, so it's nice to see the evidence occasionally.

Here are four of the most dramatic examples I've seen lately (though sadly the photo quality could be better, particularly on the Before shots): 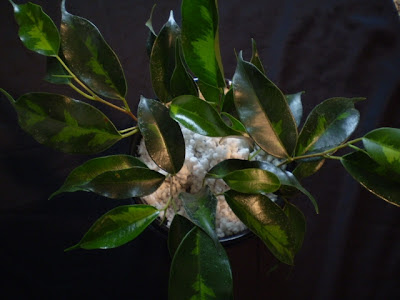 Ficus benjamina 'Black Diamond,' January 2008. Pot: 4" / 10 cm.
I brought home some cuttings of 'Black Diamond' from work and rooted them in perlite three years ago. Now, after a couple repottings (to 6"/15 cm and then to 8"/20 cm), I'm actually starting to get a respectable-looking plant out of it: 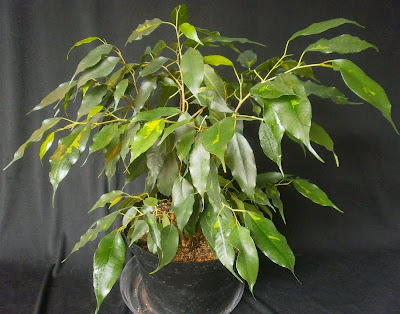 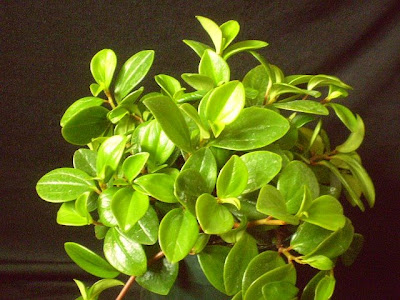 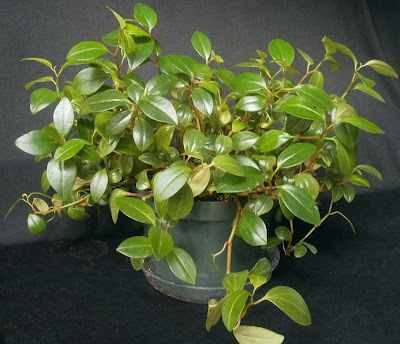 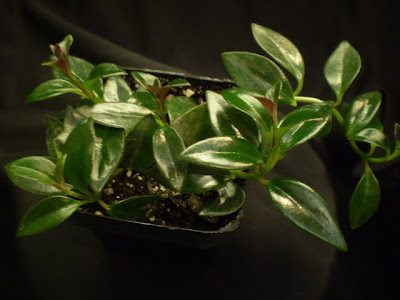 Nematanthus NOID, February 2008. Pot: 3" / 8 cm along the diagonal.
The Nematanthus also was from cuttings I took at work. I had actually forgotten that it was ever as tiny as the photo above. Give it three years to grow out, though, and it's looking decent: 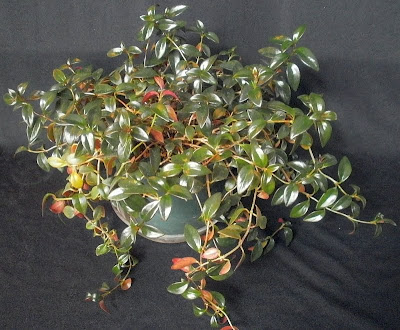 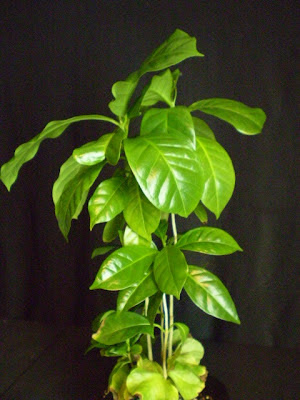 Coffea arabica, October 2007. Pot: 4" / 10 cm.
I may have to adjust the PATSP difficulty level. Granted, it's not as lush and green now as it was; there have been some problems with chlorosis, and a few of the leaves have burnt from something or another, but I've changed the fertilizer on it (Miracle Gro, with micronutrients, instead of Osmocote without), and the stupid thing's gotten six inches (15 cm) taller in a month. Hopefully I'll get regular-colored leaves again soon. 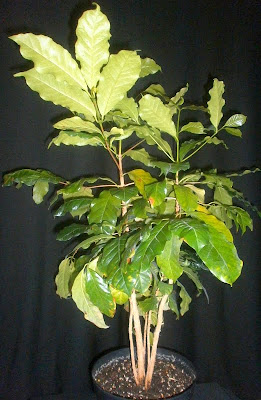 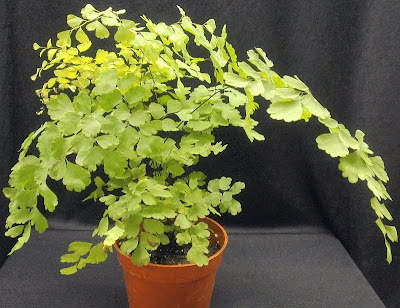 Adiantum capillus-veneris, December 2010. Pot: 4" / 10 cm.
I've only had the Adiantum two months, and it was in a terrarium the whole time, and I still let it get too dry once and all the fronds dried up and died. It's made a considerable comeback since then, though: 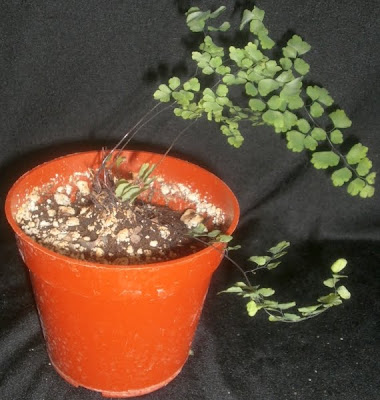 Adiantum capillus-veneris, February 2011. Pot: still 4" / 10 cm.
And obviously I'll be more careful with it now that I know.

Some plants, though, you just can't reach. I got my Radermachera sinica at the same time as the Adiantum -- 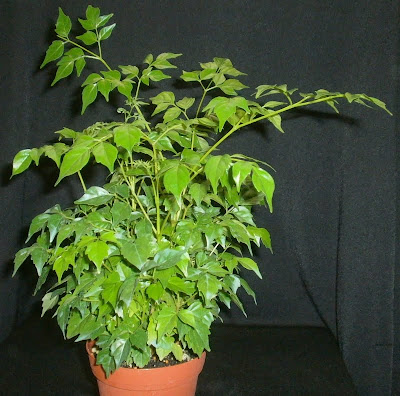 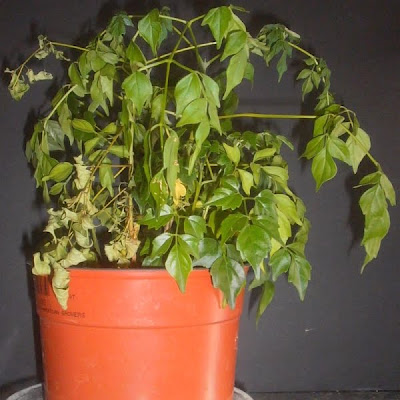 Radermachera sinica, February 2011. Pot: 5" / 13 cm.
The individual plants in the pot have been dying off one by one: tick, tick, tick. At this point, I don't even want the plant to recover, but I have trouble throwing out a live plant even if I wish it ill. It's sort of a win-win: either it will get itself together and be an okay-looking plant, or it'll continue to suck and I can throw it away. Never again a Radermachera, though. This was my second one; the first didn't last much longer or do much better. I fail to see the point in trying a third time. They're obviously not good plants for me to have.

However, Radermachera issues aside, mostly the plants improve with time. You'd think this would be something I could just assume by now, having as many plants as I do, but I actually do get so focused on acquiring new plants sometimes that I forget that the old ones do more than just sit there, and that I'm getting better at growing them as time goes by besides. These are nice things to be reminded of.

Adiantum seem to have strange growing habits. Mine seems to have just come out of dormancy in the last two months. It was only growing two or three fronds at a time until just recently. I've taken to less watering per session but watering more regularly. It seems to be doing much better and growing much faster.

A few months ago when I was out hiking I got a good deal lost in the muds and streams. Despite this I noticed in the wetness, under the leaves growing in the extremely soft soil, were numerous Adiantum just sprouting their new fronds.

I dug around a bit to check out the environment and found that they grow closer to the streams, in mostly forest shade where it's pretty moist in the low air and the soil.
The other thing I noticed when I poked around a bit, was that the plant's rhizome sections were quite large and well established. I think mine is going to run out of root space soon, based on the size of the other plants I saw. I plan on splitting the rhizomes and repotting them-- hopefully stimulating more growth for the future.

Boy, I really like that Peperomia glabella! It looks very happy.

LOVE your ficus! I did cuttings from my benjamina in October (yours is nicer) It IS amazing how they rooted and put on so much new growth in such a short time. Just picked up a variegated one, cuz they were so darn easy.

Your blog is awesome, you're a fantastic writer. The first time here I spent about an hour reading and laughing my butt off. Now I have it feeding to igoogle, right next to the weather... great stuff!

I have an ex-friend that has the last name of Rademacher so I was pretty irritated to find out that something as fabulous as a plant shares a name with this person. However, I was pleased to read on and find out that this plant is a complete asshole just like my ex-friend!

Nice post, it is a funny thing looking back on pictures of plants in their youth of you acquiring them. Sometimes they change for the good, other times for the worse. Unlike collection baseball cards or something of the like, plants are always in transition, impressing and disappointing all at the same time. It was nice to reflect with you

I can admit that I too have difficulty giving up on a plant with seemingly no will to live, but I've had a couple (a Phalaenopsis and a Euphorbia milii) that dragged on for way too long. The end result was kicking them out, abruptly, to the back porch where it was somewhere around 20*F. I don't know if I was thinking 'oh, a quick humane death' or 'freeze your asses off, I don't care anymore'. Some plants truly are assholes.

I got a C. arabica in December, and it's also doing quite well, having grown several inches despite it being winter.