Sheba got to go to the vet again this week, for various vaccinations and a heartworm test (negative, naturally). She did not like having to wear a muzzle, or having things stuck in her ears, but that was true last time as well, and at least she's not getting worse about it, and she doesn't do anything worse than growl a lot and try to get away.

Having blood drawn (for the heartworm test) was also not fun for anyone in the room. She didn't even appear to notice the injections, though.

Sheba's also holding steady at about 50 pounds / 23 kg since the visit in August. (She was 45 lb. / 20 kg on the paperwork from the shelter a year ago, but she'd been a stray for an unknown length of time before that, so a gain of 5 lb. didn't upset anybody.)

So all of that is good.

She also got to ride in the front of a U-Haul on Wednesday (long story: maybe later), which I think actually freaked her out -- she was panting hard and trembling for the whole trip. She was fine afterward, so I think she was maybe just unsettled by the noise and the jostling. 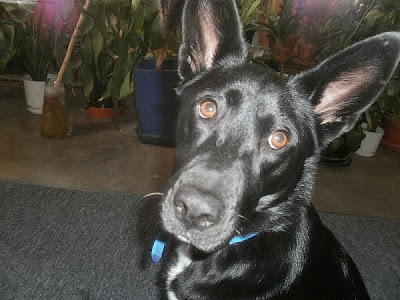 Meanwhile, Nina's special UV-generating light bulb went out this week, which I wouldn't mind so much except it's a compact fluorescent and aren't those supposed to last for, like, a billion years or something? I've only had it for three, I think.

Which I suppose is still good for a light bulb that's on every day, fifteen hours a day, 365 days a year, but it was also like a $20 light bulb. I kind of expected more.

For now, until we can get back to the pet store to buy a replacement, Nina has a lower-wattage regular compact fluorescent, which makes everything in the terrarium look annoyingly orange and dim. Like John Boehner.

Who can blame her for being annoyed at having to wear a muzzle and having things stuck in her ears? Sounds like a reasonable reaction to me.

UVB generating fluo compacts bulbs or fluorescent tubes, under 10% UVB producing capacity (which I suppose is yours, like 5% UVB are what are needed for anoles), both only last for 6 months, when used 12 hours per day as recommended. After 6 months, all the needed gases inside the bulb for UVB production are consumed, and although no visible change can be observed, they do not produce the required UVB anymore, only UVA Therefore, they need to be changed every 6 months for proper health of the lizard. Using them past this amount of time is putting the lizard at risk for metabolic bone disease and other calcium-deficiency related issues. (Even with supplementing, because without UVB, calcium ingested is simply not metabolised and goes throught).

I adore Sheba's expressions. She looks to have a little Rat Terrier in her in this photo! Love those ears!