Continuing from where we left off this morning: 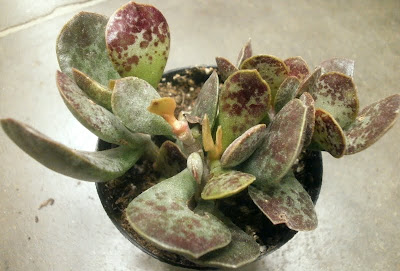 Adromischus maculatus.
I was not tempted by Adromischus -- I had one (different species) a long time ago, which didn't do well (probably a light issue). This is noteworthy, though, because I rarely see them for sale around here, and I don't think we ever got them at the garden center when I worked there. 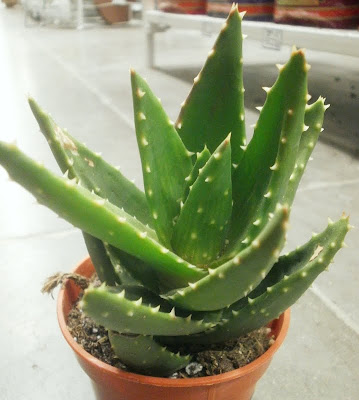 Aloe nobilis.
Another former Aloe victim that I want to retry. I felt especially bad about the A. nobilis, because I've heard they're exceptionally forgiving and easygoing outdoors, for Aloes. In my defense, the offset I received initially didn't have roots, and I think never managed to develop any, either. So not 100% my fault. 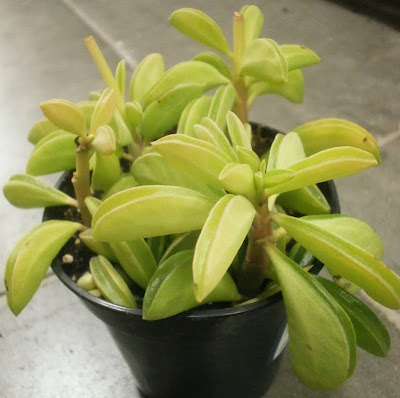 Peperomia dolabriformis.
WANT. SO MUCH. It looks like Peperomia obtusifolia, if you smeared a quarter-inch (6 mm) of Vaseline on the tops of all the leaves and then folded all the leaves in half along the midrib so the Vaseline stuck to itself. I mean, the plant isn't greasy at all, but there's a translucent window down the center of the leaf that has that yellowish, waxy/jelly appearance of Vaseline. The plant is completely ridiculous, but I really want it. 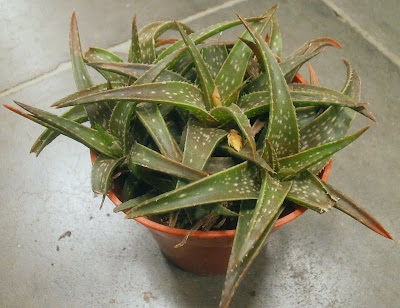 Aloe x 'Firebird.'
Aloes and I get along well, my previous stories of aloicide notwithstanding, so they stand out to me in retail situations. I assume that's the reason why I bothered to get a picture of this plant; it doesn't look like much, and wasn't even aggressively ugly like the Aloinopsis. Surprisingly, the handful of images Google served up aren't much either. Too pretty to be ugly, too ugly to be pretty. 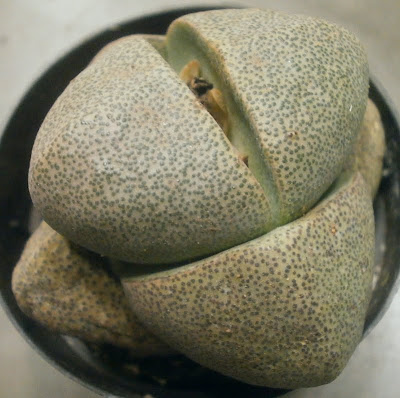 Pleiospilos nelii.
I understand why people would be interested in it, but I wouldn't trust myself not to overwater, and everything else being equal, I tend to like plants that are going to grow faster, rather than slower. 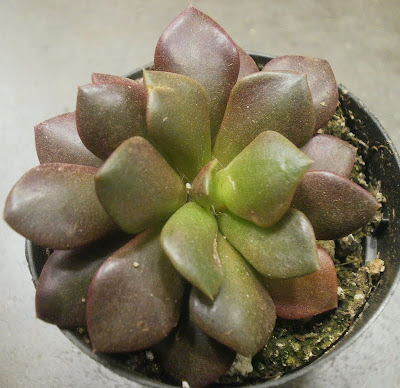 Anacapseros rufescens.
The Anacampseros I've seen before were bright pink, red and green, not dull purple like this. From looking around the net, I think this is a difference in variety, not in culture, with the brighter-colored version being a variegated form. 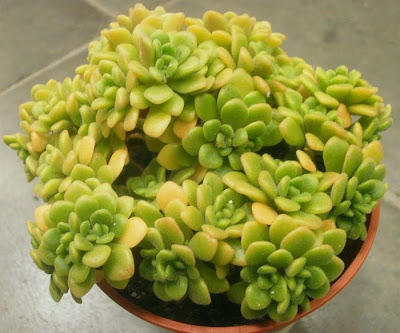 And finally, the plant I actually bought, which was perhaps a little bit foreshadowed in the post this morning (and maybe yesterday's, too, a little bit): 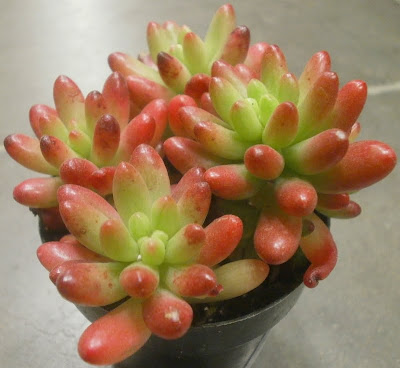 Sedum rubrotinctum 'Aurora.'
It was a really calculated choice. I've grown the species before, so care shouldn't be a problem, and Sedum rubrotinctum is sort of infinitely propagatable, so I should always have plenty to trade or sell. (Is it patented? How would I find out?)

All the plants in today's posts, by the way, were grown at Altman Plants, in Vista, CA. There's a complete list of what they have here, though I've seen relatively few of these in stores. I suspect the list may be somewhat out of date.

I love the sedum you bought. Good choice! I'm jealous because sedums don't do well here in AZ; it's just too darn hot for them. I have found that, even inside the house, they KNOW it is hot outside and sulk.

I think that one plant is pretty. So there. :-)

I'm going to have to go to Lowe's and see if the local store has that pepperomia. Want! If they have it I should be able to bring some cuttings when The Husband and I go to Iowa this year to visit the in-laws. :)

That pepperomia can be a bit of a bugger to grow. It needs a crap load of light or it gets leggy (just like all the window-leaf plants!). If you have a high light area for it though it's a nice plant.

That peperomia is fantastic ... I was only familiar with the basic broad-leaf no-name kind. I'm getting a better hang of succulents now that I have artificial light for them, but I can't wait until I can put them outside in summer. They seem to get so much brighter and happier.

Aeonium x 'Irish Bouquet'...yes they are gorgeous. I never knew they existed, and now I need some ASAP. Matti

The Sedum is not patented, or Monrovia would say so, so propagate away!

The Aeonium looks a lot like A. lindleyi, but nobody on the web who sells it wants to admit it.

I like the Aeonium. I love them actually, and this miniature variety is pretty awesome. Wish I had a cutting, these things root instantly, I plopped one in the dirt the other day and it taken grip in less then a week. Good post!

Nice plants! The aeonium you showed is actually suppose to be dark green. Not yellow. So that one did not look good. I need to go check out Lowe's again. Last time I looked they didn't have a great selection. I have a Home Depot that is a treasure trove for me.

Great that you mention Pleiospilos nelii -- for months I had exactly that plant, and thought it was some rare Lithops species. My plant looks exactly like that, and I can finally label it correctly -- Cheers