As I mentioned yesterday, I did a lot of propagation on Thursday and Friday of last week. I also had to move a lot of plants around to make room for the new ones, so the spreadsheets are a huge mess and I'm behind on watering.

But. As the title said, I've hit a milestone in the number of official plants I have in the house: as of Saturday, we've reached a kiloplant. It's a fuzzy milestone, because depending on how you look at it, the plant count has both been well over 1000 for a long time now (cuttings and seedlings that I think might not make it don't get counted as plants on the spreadsheets, but they still have to be cared for like plants and take as much work as the official plants) and remains under 1000 plants still (though I'm reasonably confident that most of the new plants I started will survive, inevitably I'll realize that some of them were put on the spreadsheet prematurely, and they'll die), but according to the spreadsheet, for the moment, we've arrived. 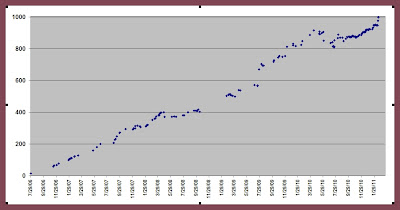 I would say that 1001 is obviously too many plants, but I've been saying that I have "too many" plants since, like, 600 plants ago, and somehow I keep managing to find places for them and take care of them, so maybe it isn't actually too many. I'm not sure.

I considered trying to go around and get pictures of all of them to post, give each plant a chance to represent, as the kids say ("East Side Basement in the hizzouse!"), but even just trying to get a picture of one shelf at a time, that would take hours and hours to do, and there'd still probably be plants you couldn't see because of the camera angle or whatever, and they wouldn't even be particularly good pictures, probably. (What I would really like to do sometimes is take all the plants outside and put them in the yard so I could take a photo of all of them at once. However, not only would this require perfect weather, it would also literally take me all day to do. I've done the math. Even if the husband helped, I think, moving the plants outside, taking the picture, and then moving them all back inside would at least take most of the day.) So instead, I'll show you pictures of the new plants that put me over the top.

Years ago, I started a tray of Zamioculcas zamiifolia leaflet cuttings. (And when I say "years," I mean years: I'm not sure when it happened exactly, but I remember where the tray was located when we lived in the apartment, and the spreadsheet suggests November 2008.)

Many of the leaflets dried up and died, but I didn't dump the soil, because that doesn't always mean that there's no chance of getting a plant out of it. The leaflets form tubers at their base, which can stick around and grow (somehow) even after the leaflet's gone.

Still, though, I've continued to hang on to the tray, waiting. Every so often a batch of them would sprout, and I'd take them out and repot them, but I left the others. Then last fall, another batch sprouted leaves. 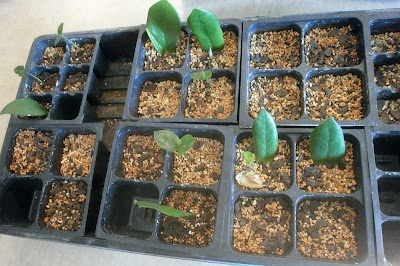 So yesterday I decided to once and for all see what was going on in there, pot up what tubers I could find, and free up that space for something else. It turned out that almost every single cell had a tuber in it, whether it was sprouting leaves or not: 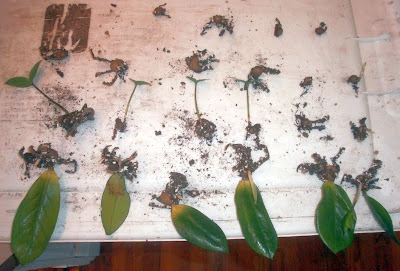 The roots are supposed to be delicate and easily damaged, so I tried to be as careful as I could, but I expect I still probably ruined a few tubers during the transplant. Still, I put three or four in each pot, so I should wind up with moderately full-looking plants even if some of them do fail. They don't look like much right now, but I added some fertilizer when I watered, so hopefully the tubers that haven't produced leaves yet will get the signal and take off. 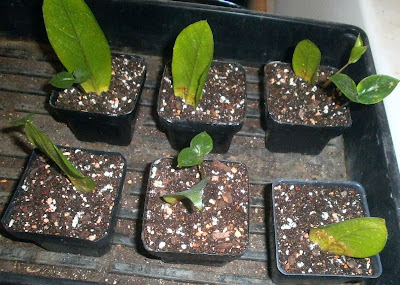 It's not a very practical way to get new Zamioculcas plants, obviously, waiting two years or more for almost nothing. But it's a way.

What happened last July to cause your dip in plant numbers?

Wow, 1,000 plants? That's incredible! As long as you are able to care for all of them, there's always room for more. Congratulations on the '1 Kiloplant' milestone :) Enjoy.

Lots of selling and trading, mostly. I sold 28 plants at once to the flower shop in town, and another 17 to one person. Also at the beginning of June, I got rid of 28 plants (most of my indoor coleus and Salvia elegans), either by planting them outside or just dumping them, and declared 7 Abutilon cuttings failures in mid-June.

Congrats on a kilo, and here's to the next one? haha

Yay, kiloplant! I propagated a still not full ZZ out of two leaflets someone else had knocked off a plant in a public atrium - it took over a year to sprout. It has three leaves and is currently in a corner too dark for it so it's been sulking for about 8 months now.

Wow. I don't think I'd have the patience to wait two years for some mystery zz plant tubers. I also don't know if I'd be able to handle 1000 plants... I think I'd feel overwhelmed and have a panic attack. Then again I've never owned a home so we'll see if I'm still saying that when I have more than 700 square feet to fill with plants

Wow, compared to that number, I feel quite sane with my 175. ;)
Also, now I want more plants, and a graph like that (I have one for books, but not for plants)

You'd better be careful, Mr S. Pretty soon the plants will reach the critical mass at which they develop intelligence and start emitting chemicals to control you. They'll turn you into a "worker ant" devoted to watering, feeding, washing, transporting, and propagating your plant overlords. Oh wait...

Do you have most of your plants set up so that you can water them in place, or do you have to take them off their shelves to water over the sink or a basin?

It's less traumatic when it's gradual.

With the exception of the two very tall Cereus peruvianus, and sometimes the large green Cordyline fruticosa, all of the plants get taken to the bathtub/watering-station in the plant room, watered, drained, and returned to their usual spot.

OMG. I would love to see pictures of the rooms in your house: How full they are with all those plants?

I'm with Aralia...would love to see a picture of a room-or rooms-in a house so filled with plants. So much oxygen....it must be heavenly.