I went a little nuts this week propagating stuff, and cut a bunch of the Pellionia out of Nina's place in the process. (A little of the Fittonia, too.) While I was in there, I took out the Vriesea, because although it's adorable when she sleeps in there, the plant has been dying. Tiny, roundish silvery bugs (which I've seen before but have never been able to identify) were crawling around near and under the Vriesea, too; I don't know if the bugs were the cause or a symptom, but it's possible I'm going to have to dump out all the soil and start over. Ordinarily I'd try spraying with neem oil or something, but Nina has to live in there, and I don't have an alternate location for her.

The Vriesea hasn't been replaced; I stuck a cutting of the big pink Fittonia in the corner because I had one left over after potting stuff up, but it's not big enough to substitute for the Vriesea and may well die soon anyway. If it takes, then great; if it doesn't, no big loss. Nina's apparently not a big fan of change. Here she is watching the new arrival out of the corner of her eye: 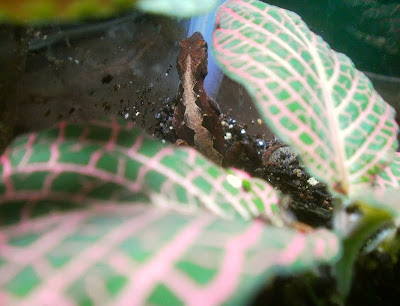 If the bugs were more or less cigar shaped I'd say thrips. Wonder if they might be springtails or some sort of mite.

Is the Vr. planted in the media of the terr? If so that might be part of the issue. If it can be salvaged, it might be better off mounted/raised slightly off the substrate. I assume this isn't one that has previously bloomed?

Crypts should do well in the substrate.

She might, but they're mostly under the soil, so most of the time she wouldn't be able to see them. And they're tiny, too, so I don't know if she'd even think they're worth her time.

Are there springtails that don't jump? 'Cause that was my first thought, but these don't jump. They can run pretty fast (considering their size), and they're small, so it's really hard to get a picture. (I did try, this time, but nothing turned out well enough to post.)

The Vriesea was planted in the same medium as the rest of the terrarium, yes. Which was my mistake, and I won't do it again. (It has four siblings, though, who were just transplanted to a sphagnum / potting mix mixture outside the terrarium, which are doing great since the transplant.) It's not salvageable as is, though; the leaves at the center had started to dull and curl, and it had almost no roots left.

It hadn't previously bloomed, no: I actually don't even know what color they're going to be. (I bought it post-bloom from among a set of bloomed-out Vrieseas at work, picking this particular plant because it had so many offsets. If I remember right, all the Vrieseas from that particular shipment bloomed either red or yellow, and the odds are probably in favor of yellow.)

For the time being, I'm probably not going to try to replace it with anything (except the pink Fittonia), because I think I'm probably going to have to dump the soil and start over again anyway.

I read online about using carbon dioxide emitted from dry ice to kill bugs in a terrarium. It had the benefit of being non-toxic (although you would have to move your pet for a day while it was being done).