My original plan for today was to participate in Garden Bloggers Bloom Day again, but GBBD posts take a lot of time to put together and at this point (early Sunday morning) I'm still hoping that I can get the Persea americana profile together in time to finish by Wednesday. (UPDATE: I did.)

So, instead, we have a long-awaited (by me) Nematanthus 'Tropicana' bloom, which was still only in bud stage for the January GBBD. (Still only one flower, though: the other buds are taking longer.) 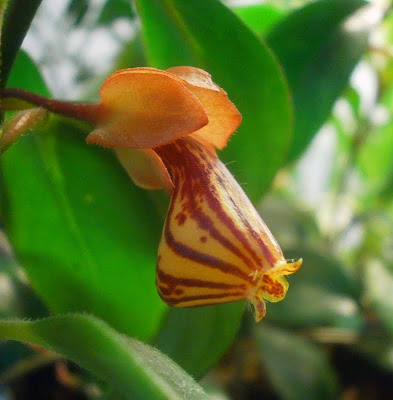 This may not be 'Tropicana;' I'm using that name because it's the only cultivar I've seen with striped flowers like this. It didn't have an ID when I bought it.
Happily, it's next to a NOID orange-blooming Nematanthus which has been flowering for a long time, so I've been able to attempt a little cross-pollination, too. May or may not work, but I figure it's worth trying when the opportunity arises. 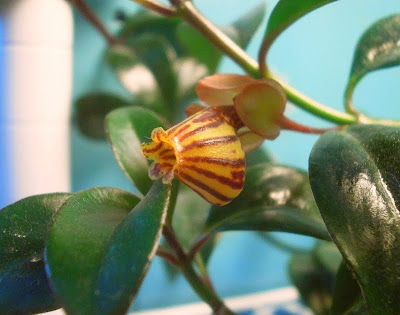 Lots of gesneriads lately. This was originally accidental, but, one, once I realized I had a thing going, I decided to go along with it, and two, the Tennessee Gesneriad Society has been lurking around here lately (*waves*), so I figured I should post something relevant to their interests.

It does look like 'Tropicana' and if you bought it commercially, especially if it was an "Exotic Angel Plant," it's probably 'Tropicana.' I really like 'Tropicana' because it's a good bloomer with long-lasting decorative calyces, but I mostly prefer the large-flowered Nemanthus like corticola (http://www.gesneriads.ca/nemata41.htm) with pendant red flowers dangling beneath the foliage.
(Tennessee Gesneriad Society member waving back!)

Wow, I've never seen that one before but I think it's my new favorite Nematanthus.