I appreciate everybody letting me have a couple days off. It was seriously needed.

Our basement flooded at the beginning of last August. Since then, the husband has torn the basement apart and then put part of it back together, noisily. Only part of it, but enough that I was able to spend a solid chunk of Wednesday, Thursday and Friday this week disassembling and reassembling a bunch of plant shelves downstairs, which was ridiculously stressful. (Slightly more than half of all the plants in the house live in the basement, and of those, approximately 300 were affected by the move. I'd sort of been looking forward to the process, because some of the plants involved have been in spots that were less than ideal for them for some time, and I had thought that by starting over from scratch with the shelves, I could come up with a better setup than what I had. This failed, of course, and I suspect that the plants are going to be wandering up and down stairs for a long time to come before I'm satisfied with where everything is again.)

The reason why I bring this up is that today's Sheba pictures are from the period in between the completion of part of the basement and the dis-/assembling of the plant shelves. We took her downstairs a few times so the husband could throw tennis balls for her to catch, and I could try to get action pictures or something.

It didn't work out all that well, because there wasn't enough light down there to get decent pictures, but I did still get some interesting shots. E.g. Sheba blurry and levitating: 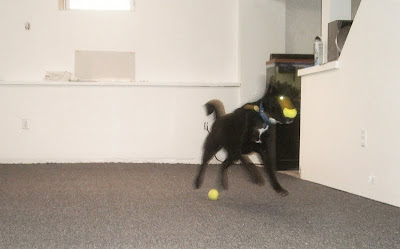 Or Sheba looking terrifying as fuck (would not want to be that tennis ball): Also, since I've brought it up, this is what the new shelves look like at the moment, as seen from the south -- 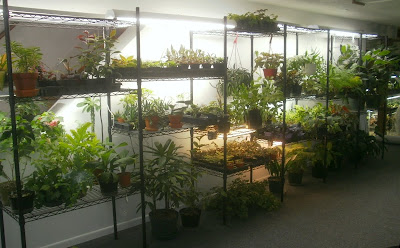 --and from the north (with bonus Sheba). 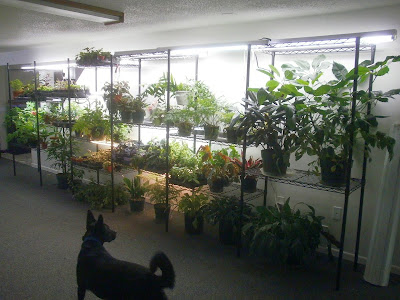 You may be thinking well what's so terrible about that, Mr. S.? It looks fine.

It may look fine, but by comparison to the previous set-up, I think there are a lot of plants which are now getting less light than they used to. I mean, it's the same number of shelves, and roughly the same number of plants, but somehow I couldn't put it all together again in a way I was satisfied with. This is maybe to be expected, since I wasn't entirely satisfied with the old set-up either, but the point is that a different set of plants will be suffering now, and they're not going to be prepared for that.

Oh, before I forget -- Nina has a new light bulb now. The package says they're good for a year, which means that the previous one was in use for a year longer than it should have been. (Maybe more like ten months, since she didn't have the special light bulb until she'd been here for a while, and the first one I got stopped working quickly and I had to take it back for a replacement.) But if she has rickets or something, it's not obvious, and hopefully it'll be corrected by this time next year.

That second photo of Sheba looks quite intimidating. "My, what big teeth you have..."

I love the setup you have going for your plants in the basement. Both fuctional and attractive.

Perhaps you address this in another post, but what kind of lighting do you use in the basement?

Ordinary four-foot (1.2 m) T12 40W fluorescent shop lights, mostly. Most of them are cool white, but there are some warm whites, and a handful of either T5s or T8s in there too.

The plants look great, but I can see what you mean by lighting issues. Some of them look like sitting in the shade.

Sheba is intimidating. I hope she would do that if someone broke into your house and tried to steal all your wonderful plants!
I love your light setup. I'm so jealous.

Since you've been trying to come up with ideas on how to make money off your plants and blog, you could start charging admission to your house or you basement to see those plants! I was just at the Conservatory of Flowers in San Francisco yesterday and you're compares nicely!

That setup is awesome looking. Even if you're not entirely satisfied with it, I'm getting some good ideas :)