How to Start Cannas From Seed

I've been wanting Cannas to plant outside for quite a while; they seem like nice plants, and I'm impressed with the size. Thanks to a gardener here in town, I have both rhizomes and seeds to play with, so I'll be able to get flowers the first year while also building a small Canna army from seeds.

Hundreds of people on the internet have already posted instructions for how to do this, but it's getting harder to come up with topics I haven't already covered, and anyway just because hundreds of other people got there first is no reason not to post something. So. 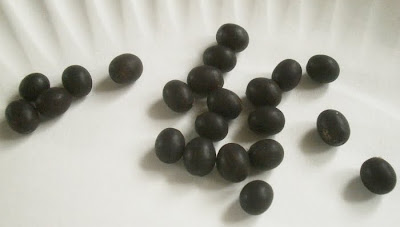 Seeds are easy to find in late fall, on other people's plants. (If you have permission, obviously.) I cut off old bloom stalks and took them home to get the seeds out, instead of trying to take them out right there; you don't have to do it that way, but the seeds are about the size of a pea, black, and smooth enough to be slippery, so it helped to be able to work over a box, rather than at a table -- I didn't have to worry about them skittering away from me.

Then you have to wait for the appropriate time to start them. The usual recommendation is 6-8 weeks before one's last frost date; I started mine a couple weeks ago, on March 22. Our last frost date is roughly May 15, so that's about 8 weeks ahead. Between collecting the seeds and starting them, I kept them in a small medication bottle on the floor in the plant room next to the door. I don't think they needed the cold, but it wasn't going to hurt them any, either.

In the wild (Cannas are native to tropical and semitropical parts of North and South America), germination depends on fire -- fire weakens the seed coat, as well as getting rid of the competition -- but it's more convenient to scrape away part of the seed coat than it is to set your Canna seeds on fire. This enables water to get through to the embryo, which triggers it to start developing.

I had trouble with this step at first. Finding a suitable grip to use on the seed while filing it down was harder than you'd think. I eventually wound up holding them with a pair of pliers and scraping them along a strip of sandpaper, which worked . . . pretty well. I still had a few escape and go pinging around the kitchen. (Fortunately they're noisy. You may not be able to see it, but looking in the general area where the tick-tick-tick bouncing noise stopped will usually turn up the missing seed.)

I didn't pay attention to where on the seed I was scraping; on-line sites assured me that it didn't matter. 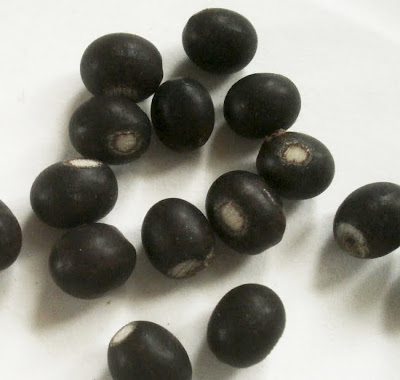 Then I put them all in a glass of water and waited. The seed coats contain a germination inhibitor, so it's helpful to change the water often (at least daily?) while you're waiting for roots to appear. 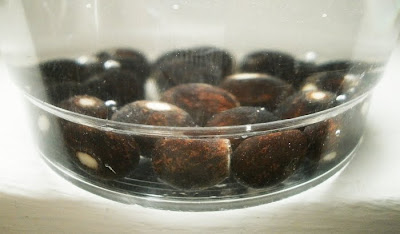 I saw the first roots around the third or fourth day, and took this picture on the fifth day (27 March): 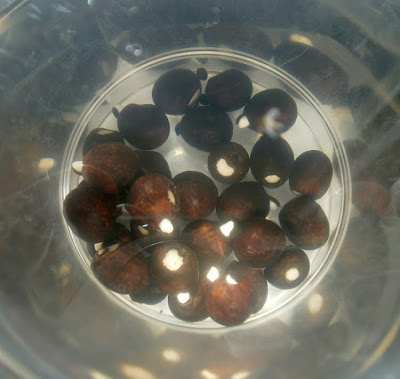 At which point I planted the seeds in soil (just the regular Ball potting mix) and set them on the back of a fluorescent light in the basement. The basement is colder than I wanted for them, but the bottom heat from the light compensates for that somewhat, and I couldn't come up with anywhere that would be better. The house is crammed pretty full of plants right now.

On April 1, after a few days when I forgot to check on them, I happened to notice sprouts -- 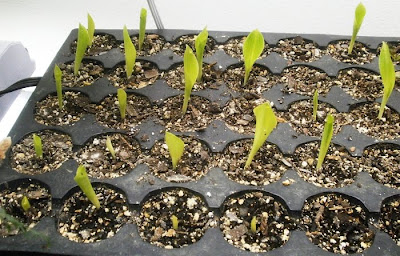 Out of 23 seeds I started, 21 had started to come up as of April 3, and we still have hopes for the other two. I'd been worried, a little bit, because after I sandpapered them, I found a website that said to always scrape the end opposite the scar, to avoid damaging the embryo. I hadn't paid any attention to that: I was just trying to hold on to them however the pliers would permit. Fortunately, it appears that all the other sites were correct, and as long as you stop once you're through the seed coat, it doesn't really matter where you do the scraping.

Now, I think all that's left is to grow them inside until we're past the threat of a freeze, at which point I can plant them outside. I'm a little concerned about how fast they'll grow, and whether they can stay in the plug tray until May, but I suppose we'll find out. If I have to transplant them, then I'll transplant them.

What a timely topic. I just received a single Clivia seed that I was thinking about starting. I was going to search your site for seed starting information today.

I heard about a kitchen tool that helps to stratify seed coats. It's designed to peel off the outer layer of garlic. It has a rough surface inside a tube. I'm not sure what they are called and I haven't used one but it might help with large, slippery seeds.

Good luck with the Cannas!

I Love the miracle of seeds.

And I suspect that they won't stay in the plug tray until May. Hope you do a follow up at the transplant, I'm curious to see how big the early leaves get.

I put Canna musifolia bulblet thingies in a pot a few weeks ago. The resultant plants (yeah, like, five of 'em) are several feet tall, with the largest leaf about two feet long. It has only been a month, maybe five weeks. I know it wasn't from seed, but it's still a huge plant--I would be surprised if your little babies didn't grow little root legs and move into a neighbouring pot by themselves! They seem like pretty independent and strong individuals to me.

I've done cannas from seed before. They'll probably hold in the plug trays but you might stunt them a bit, at least for the first part of the season. They're super easy though and mine bloomed the first year.

So informative. My canna musifolia produced some seeds, and I thought "Why not give a go?" Good tips about scratching the seed coat and soaking in water. I'm definitely going to try this.

Thanks, I just received 6 seeds yesterday