I've been having anxiety dreams all week. On Tuesday morning, I was late for work at the garden center but somehow unable to go or call in to explain. On Wednesday morning, I woke up having my throat slit but don't remember the rest of the dream. On Friday morning, I had a test in a Russian class I'd been skipping a lot, so I didn't know most of the material, and then I also knew that I had an English test two hours later even though I'd never even bothered to go to the English class.

I know there's nothing more boring than someone else telling you their dreams, but I'm unsettled by this, on two levels: one, the dreams are somewhat unsettling on their own (especially Wednesday's), and two, I have no idea what my subconscious is telling me I'm so anxious about. Whatever it is, it must be pretty important.

Sheba's had a few scares of her own this week, the most interesting being that we got her a glow-in-the-dark plastic ball to go with the Chuck-It. It seemed like a good idea at the time, and she knows well enough how the Chuck-It works -- I throw something, she retrieves it and gives it to me, I throw it again -- that I figured we'd have no problem understanding doing the same thing, except at night. After all, her night vision is supposed to be way better than mine, so going out in the middle of the night ought to be basically the same to her as going out in the day.

It didn't work that way, though. We went outside, I threw the ball, and she absolutely Flipped. Her. Shit. Barking, growling, running from side to side as if trying to find a direction from which to approach -- it actually took me some time to figure out that she was upset about the ball. My night vision isn't that great, after all, and for all I knew she saw another dog. Maybe a puma. But no. She was just disturbed by the glowing plastic ball.

After some practice, we got her to the point where she would go to the ball and pick it up, though she wouldn't always drop it or bring it back. (There's something kind of funny about watching a glowing green dot bounce around the back yard, by the way.) We'll keep working on it.

Obviously it's kind of difficult to get photos of any of this, but I did manage (on the "Fireworks" setting) to get something, once we'd come back inside again: 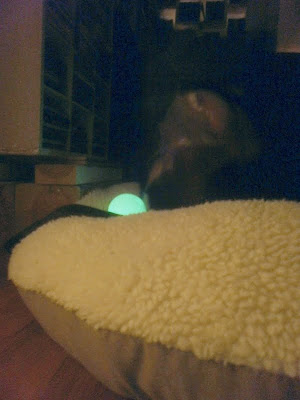 (The lighter-colored blur extending up and to the right from the ball is Sheba's neck and tongue; the "Fireworks" setting has a very long exposure time, and Sheba doesn't sit still well.)

I'm so sorry to hear about your anxious dreams. Do you think it could be the change in the weather? Spring is often an unsettling time as the weather whips back and forth between cold and warm. There's the constant feeling that you've waited too long to plant things, or you've done it too soon.

A long soak in a hot bath might make for a more restful night.

There are lots of things more boring than hearing about someone's dreams.

Hope you have better dreams.

Maybe Sheba thought the ball was some sort of critter's eye? Since animals' eyes do look like they glow in the dark, maybe there was a part of her that said "Stranger! Threat!"

About your dreams...can I make a suggestion? I know you´re probably fine by now, but next time, (ofcour4se I hope there isn`t a next time) try reshuffling your bedroom furniture, or even go a step further and bring in different and/or new furniture, or paint a wall (or two). Include your partner in the project, but beware, there´s a thin line between creative cooperation and cupboard-slamming, chair-banging arguments, should your relationship be a bit out of sync. However, when you have the results before you (i.e. different looking bedroom) you get this "starting over" feeling and you sleep better. At least I do. And theres the extra bonus of having removed the dustgunk from where no man has gone before (since moving in).Just a suggestion.