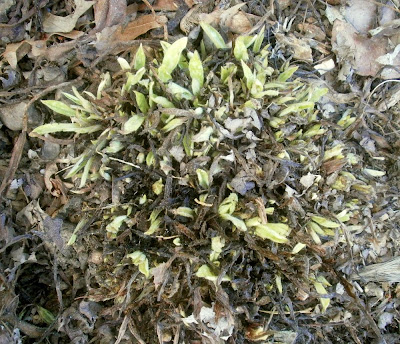 I guess spring really is going to happen, then. This doesn't look like much right now, and they're very late compared to last year (last year there were flower buds by early April), but I love seeing them come back. I'd say they're one of my favorite outdoor plants if I were well-acquainted with more outdoor plants; as it is, I just have to say that I really like them, and want more. Because of the way the back yard is oriented and shaped, there aren't a lot of good places to plant more, though. And the husband has been saying since we moved in that they're going to have to move somewhere, because he has plans for the garage, so I may not even get to keep these. We'll see.

I went searching for information about Pulmonarias that would be interesting, and ran into an article by Plant Delights Nursery's Tony Avent. It turns out that a commenter recommended this same article to me the last time I posted about Pulmonarias, but I didn't remember seeing it, and most of you probably haven't either, so go there if you're interested in learning more. Among the tidbits are the actual ancestry of 'Raspberry Splash' (Pulmonaria longifolia 'Bertram Anderson' x Pulmonaria 'Leopard') and an explanation for the silvery spots on the leaves (they're the result of air pockets in the upper part of the leaves, which keep the lower part cooler).

I also had a question the last time I posted about Pulmonaria regarding 'Raspberry Splash's mildew resistance, which I can sort of answer now -- not only have I not seen mildew on this plant for the last two years, both of which were very wet summers, but P. longifolia, one of 'Raspberry Splash's parents, is known for having good mildew resistance. They're also planted in one of the two windiest spots in the yard. I've had more mildew on an indoor Cissus rhombifolia (R.I.P.) than I've seen on the Pulmonarias.

I'm looking forward to the blooms.

Here in USDA zone 9B, my raspberry splash stays evergreen, and mine are all finished blooming. They were spectacular though!