I noticed while watering this flat of (mostly) Gasteraloe x beguinii (Aloe aristata x Gasteria batesiana) that one of these plants was not like the others: 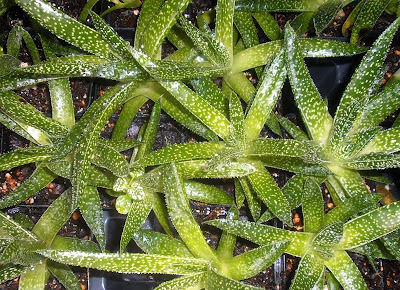 This is noteworthy mostly because I haven't planted any seeds. I actually haven't even seen a Hypoestes seed yet. (They're commercially available if you Google for them; I've just never wanted any.) Obviously there's been one at some point or another, though -- the parent plant lives next to this flat of Gasteraloes, and is apparently as much of a nosy neighbor as I said it was in the profile. I'm still a little puzzled, though: the Hypoestes doesn't hang over the Gasteraloes; it's a few inches away. So it would have had to throw seeds, somehow, which I think maybe I dimly remember hearing something about that, but I couldn't confirm my suspicions with Google just now, so I may be misremembering.

Similar things have been happening in the living room: I've seen a few unidentified seedlings in one specific section of the room (couldn't find any to take a picture of, but last time I saw them, they were all too small to have any true leaves yet), which happens to be the area around the Justicia schedweileri, which: has also been blooming more or less nonstop for the past couple months.

And: there are references to Porphyrocoma/Justicia about its ability to explosively propel seeds a large distance from the parent plant.

(The actual quote is "The seed stalk or funiculus of each seed is modified into a hook shaped jaculator or retinaculum that functions in flinging out the seeds during dehiscence." I have no idea why people would think botany is a dry subject, if this is the kind of stuff botanists get to read, but I'm pretty sure this translates into non-botanist as, "the seeds have a thingie that propels them away from the plant when they're ripe.")

It just so happens that I've been spending mornings in the living room a lot lately, and while there, especially on sunny days, I'll be sitting quietly, minding my own business, when I'll hear a sudden CRACK! from the general area of the Justicia. I've never been able to pin it down to anything particular (in fact, I'd assumed it was probably the acrylic sheet the Justicia and other plants are sitting on, expanding in the warm sun), but it could be the Justicia exploding and scattering seeds around, which would explain both the noise and the randomly appearing seedlings. Once some of the seedlings get old enough to have true leaves, I'll be able to confirm that.

There are some lovely pictures of a jaculator of Anisacanthus quadrifidus at TAMU.

It does look as though that Hypoestes was trying for camouflage.

Nothing to do with houseplants, but the seeds of Witch Hazel (Hamamelis) can be propelled across a room. Since the flowers bloom at the same time the seeds are ready to go, this can be a big surprise to someone who doesn't know that, and has picked a lovely bunch of flowering branches for the living room. They are shot off with such force that they sting if they hit bare skin.