I have a lot of ideas about things to do with the plants that never wind up coming to fruition. Either the plants are uncooperative, or I lose interest, or I make an error at a critical moment in the process and everything falls apart. (In fact, I'm considering making a post about projects like this -- not quite a Where Are They Now? sort of post so much as a How Come You Never Wrote About This Again? post.)

One of the ongoing failures has been Murraya paniculata propagation. I knew someone must be capable of doing it, 'cause otherwise how would we get more Murraya paniculatas? But I've failed, repeatedly, with cuttings and seeds both, and had kind of reached the conclusion that propagating Murraya was just not in the cards for me. 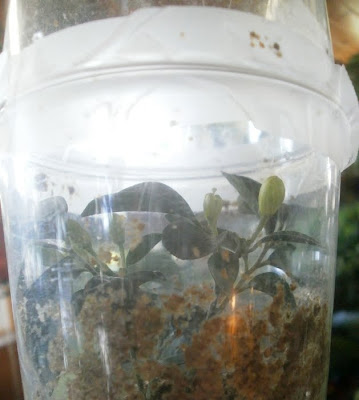 And it still might not be, of course. Many things could still happen. But last fall (last summer?), I took a cutting and stuck it in damp vermiculite in a clear plastic cup, then put another clear plastic cup on top of that, and taped them together, and then MANY MANY MONTHS happened. During that time, the cups were untaped maybe three times and more water added, and the last time I did that, I put a little fertilizer in as well. (I also knocked it over repeatedly, because the cup has a narrow base and a high center of gravity.) It's been sitting in an east window, where it gets a lot of bright artificial light and intermittent filtered sunlight, when we have sunlight.

And I just noticed, last Saturday, that the fool thing is trying to bloom: 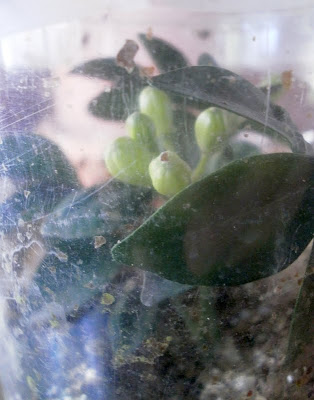 Which worried me, initially, because I leapt to the conclusion that it was wasting energy on blooms when it hadn't even built any roots yet, and I was getting ready to give it the I'm-so-disappointed-in-you speech, but then I found a root -- 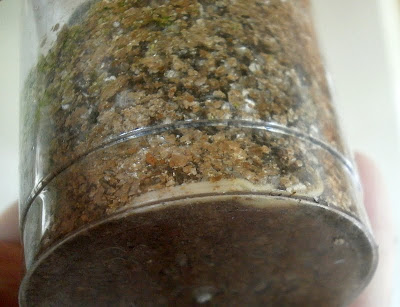 -- so now I'm thinking well, maybe I've solved this problem. Still too soon to have the Murraya Propagation Party, and it's an unpleasantly slow process even if it does work, but I'm feeling hopeful.

Congrats, Mr. S. You deserve a big ol' sense of accomplishment on that one!

Congrats! So what's the next step? How do you go from his happy little Vermiculite world to a potted plant? Perhaps the subject of a future post?

Hoorah! It is still a little young for sex, though.

Well, that's the question, isn't it?

I've lost plenty of plants before by transferring them to soil too early, or too ineptly, so I don't know for sure when or how to do this.

That's what I thought. We hadn't even had The Talk yet.

Funny thing is M. paniculata is becoming weedy in subtropical eastern Australia. Too bloody easy to propagate (itself)!

Top 10 (or there abouts) horticultural plant, but the bugger, like so many others, is jumping the fence.

Pretty rugged thing, so may not be too hard to transplant.

I generally skip the "I'm-so-disappointed-in-you speech" and punish the plant by removing the unwanted buds. It's worked pretty well. I even remove some of the smaller lower leaves and pinch new growths if there are enough leaves-- to redirect energies down to the roots. I've heard cutting leaf tips can also stimulate the plant's growth patterns rootwardly

thats like me i had the same problem as you did starting out but you still have to change the old water and put fresh water in it it does take long growing the new roots sys,

i had 1 long root growing on mine in plane tap-water then i took it out put it in the dirt and a week later it died and i was kinda upset after that and thought well I'll have to try it all over again is what i was thinking i only used the rooting powder and tap water for mine.

cutting the tips don't work so don't try it

So, Mr_subjunctive, how did you go about germinating the seeds?

I have in my pocket, right now, a few that I was given. Ssshh! Don't tell anyone. I am planning to let them sit a while in a damp pile of natural mulch (not that bought garbage) and allow them to do their thing. Since they propagate like there is no tomorrow where they come from, I am predicting No Problems At All.

But I have been wrong before.

Stuck them in damp potting soil under lights, watered it as though there was a plant already there, and waited. Not all of them germinate, and sometimes even when they do, it takes longer than I expect.