And as long as I'm talking about the outdoor stuff today, I have a question for everybody. Last fall, I asked about five unidentified weedy things that I'd seen around town, and the third one, which had come up in the garden at some point late in the year, was identified as Oenothera biennis, the common evening primrose.

I don't know how it got there, but it looked cool, so when something similar-looking began to appear in the spring this year, in more or less the same spot in the garden, I got excited. I even made a little sign for the husband ("NOT A WEED"), because sometimes he mows over stuff I want to preserve. And so we've been waiting for a couple months now, give or take, for it to get all primrosey.

But, now that it's gotten considerably larger, I'm left uncertain about whether or not this is in fact the plant I thought it was, so I'm asking y'all if this looks like it's something else. The main reason I'm wondering is because the leaves look substantially different -- less shiny, and the white midvein is considerably less prominent. For all I know, that could be perfectly normal, but I thought I should check. I realize the picture's not the greatest; it'll expand if opened in a separate window, but that still might not help. 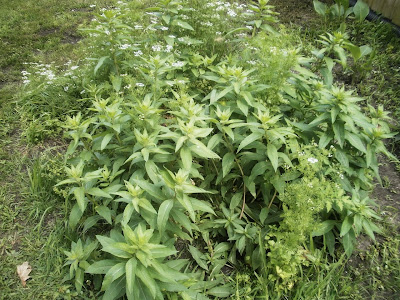 Also, opinions about whether or not I actually want it to be evening primrose are welcome, too. I've never seen any that looked deliberately cultivated, and the davesgarden.com commenters are fairly indifferent about them (3 positives, 4 neutrals on the species page), so I'm wondering why.

I would say it still looks like Oenothera biennis. But I personally would disagree with the sign you made for the husband and say that it is, in fact, a weed. They're not exactly unattractive, but not very showy. There are a lot of other oenothera out there that are much more worth growing.
However,oenothera are very cool because they have circular chromosomes! Like bacteria!

Could it be goldenrod?

I've known people to cultivate O. biennis in the context of a native plant meadow, but I agree with Greensparrow, they aren't very showy, and in bloom the spent flowers are prominent visually and (in my opinion) look a bit messy. It will seed around, but it isn't impossibly aggressive, at least not in New England.

I'm questioning the identification now, because it doesn't usually grow in tight clumps like the plant in your photograph. O biennis has a single main stem in its second season, after spending the first as a rosette. And I generally see it growing mixed with other plants and not in a monoculture as in your photo.

O. missouriensis/macrocarpa is my favorite member of the genus, not at all weedy, kind of a rock garden plant.

Beware of the pink-flowered O. speciosa, it's beautiful but definitely a garden thug, basically uncontrollably aggressive.

I agree!! It looks too bushy to me to be O.biennis, and there are better Oenotheras to grow. I'm definitely considering biennis a weed this year-- having let one go to seed last year. The crop of seedlings is enormous.

Could possibly be some species of phlox. The foliage is a pretty good match but I can't say for sure without seeing a closeup of the very top of the stalk.