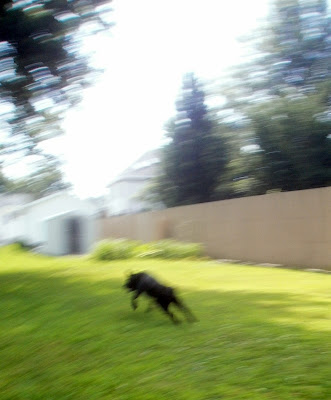 The intent here was to get a picture of her running, but obviously that didn't exactly happen. I like Abstract Sheba, though, so that's what's up this week. Like it or don't.

This week's been kind of rough on me; I couldn't get to sleep on Monday night, so I didn't go to sleep at all, just stayed up all day Tuesday. This was great, in that I got a lot of urgently-needed picture sorting done, but bad, in that I spent all day Wednesday, all day Thursday, and the latter half of Friday with a headache. Not really worth it. And then I spent several hours taking more pictures, during those three days, until my camera overheated (it's since recovered, but it really did overheat -- sitting in the morning sun on a hot day on black fabric will do that to a dark-colored camera: now you know), so I now have more photos to sort through than I had when I started the week. Also? I didn't even take all the pictures I was hoping to get, and now a heat wave is going to settle in for a week and a half and keep me from finishing the job.

Also, for those of you who have been following the story of the guy who fell off, and then got hit by, a telephone pole near us -- the husband went to the man's place of business (a cable company) on Thursday and asked them if they knew how he was doing. They only knew that he was still alive, and still in intensive care, where he's apparently been since this all happened. (We've also heard, from another source I don't recall, that he's in a coma, which is consistent with intensive care but also less reliably sourced.) The husband and I are still pulling for the guy, but I'm starting to get worried again.

I'd say the pic's more Impressionist Sheba than Abstract Sheba. ;)

I've been following the story about that guy, and I hope he recovers. Nice photo of Sheba. I do like it.

I really like that picture of Sheba - so reminiscent of my mental images of my big black dog running through the meadow; long after the dog is gone it lives on in that way.

Looks like a photo of Sirius Black in dog form.

She looks like the essence of wild dog. I love it.