The good news is that the Abutilon seedling I wrote about last week, the one with the flower buds, has opened one of the buds, so the question that's been on everyone's lips for the last year -- What color will the seedlings turn out to be? -- can be answered. I was expecting pink, since the only candidates for ancestry were white, pink, or red-flowerers, but instead, I was pleasantly surprised to see light peach: 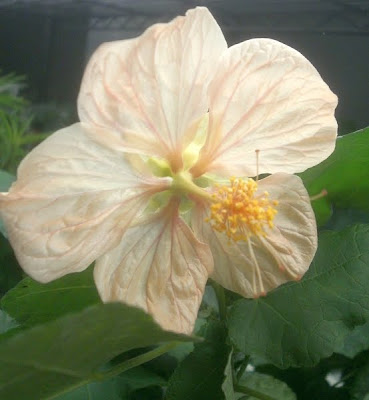 It's prettier in person; the color is tough to photograph.
In retrospect, this is maybe not as surprising as it first seems; the "white" flowers are really more of a pale yellow, and the yellow is strongest when the flowers first open. So these will probably be peach that fade to a light pink. But I'm not complaining. I think this is still pretty neat.

The bad news is that we're beginning a heat wave that's going to last for the next few days at least, and maybe until the end of the month, and although the house is insulated as well as we can possibly make it, and the air conditioner runs non-stop all day long, the house heats up anyway. This makes me exhausted and edgy, so I'm thinking blog posts are probably going to be scaled back this week. As if that's not bad enough, I've been trying to figure out how to get rid of a virus on my system (one of the Google redirect viruses; it's been with me for a while now and hasn't caused any noticeable problems -- I can still use Scroogle fine for searches -- but I don't know what it's doing that I can't see.), and haven't gotten anywhere so far, so I'm going to work on that if I think I can handle it emotionally.

So. You're not going to want to hear me whine about everything, I'm not going to have the energy to do it, and so it's probably best for both of us if I keep to myself a bit more for a while. There'll still be at least one post this week (there was one previously-scheduled for Friday), and probably at least a couple, but it looks like a slow week for PATSP.

I'll still check e-mail and approve comments and stuff, though I might be slower than usual in dealing with them.

Viruses suck. I had to deal with one yesterday that killed IE and fouled up McAfee. After much trial & tribulation I was able to get rid of it by downloading the free version of AVG & running a scan. That fixed IE, but McAfee was still acting up so I had to reinstall it. The whole process took 6 hours. Not how I wanted to spend Sunday.

As near as I can tell, the best thing to do is run various antivirus programs until you find one that zaps your particular bug. Good luck.