It was sort of a logical thing to happen, following the Coffea flowers, but even so, I was genuinely startled to find that my Coffea has begun to produce berries: 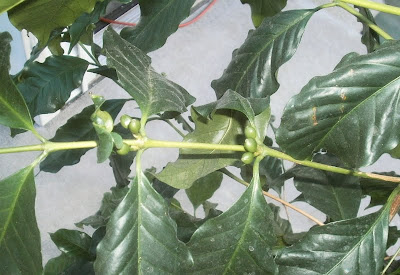 This picture dates from 16 July, about a month into the hiatus. It's pretty cool, though I'm not counting it as one of the two big things the plant collection did to try to get back into my good graces, as described in Tuesday's post. Those things are way more incredible than this.

The Coffea is now about 5 feet / 1.5 m tall now, which would be fairly cool on its own, even without the berries and occasional new flowers. (Still haven't been able to smell the flowers, by the way.)

Hey Mr. S! Mine has a bajillion berries on it that I'm just waiting for to ripen. If you can find out what to do with them after to make a decent cup of java, let me know. I've tried googling it but the instructions are for large harvests. It doesn't say whether I actually have enough beans to even make 1 cup.

Wow, I would never expect it to produce berries growing indoors. I guess it is self-pollinating then.
How long did it take to grow the plant to such substantial size? I usually see them being sold in garden centers, very small in 3-inch pots, and think that it will take forever to grow them to blooming size. Would it really?

I'll let you know if I find anything, but I doubt I'll do any better with Google than you did.

It's one of my older plants; I've had it since December 2006, and it was probably about a year old then. You can see a picture of it from October 2007 in this post, and a picture from this March in this one.

Six years to reach blooming size is a bit on the long side, but for a lot of the time I've had it, I wasn't fertilizing it substantially. Lately, I've been fertilizing it so hard that I'm not really even giving it plain water in the tub anymore: I just pour in straight double-strength fertilizer and let that drain. It's probably helped, too, that I was able to relocate it to a spot that gets some direct sun in the late afternoon.

We occasionally had taller Coffeas for sale at the garden center (~$40 for a plant 4-5 feet tall), but most of what we had were 3- and 4-inch plants too. I don't think any of them ever lasted long enough to move into anything larger than a 6-inch pot, but I'd be willing to bet that you could grow a 3-inch plant into blooming/fruiting size within 3 years if you had enough light, warmth, and fertilizer for it.

Thank you for the info mr_subjunctive! I think I will be getting one next time I see them for sale here. Your example with blooms and berries is quite encouraging. And I have just the spot for it - large two-storey south-east window with lots of morning sun, behind my vandas and catts.
Do you use any special fertilizer? I use balanced 20-20-20 on all my orchids and house plants. Hope it will work for coffea plant too.
Thanks again

Yeah, fertilizer is the key to getting it to bloom and produce berries.

What size pot do you have yours in now, Mr S?

Nothing special; I use the same 24-8-16 that I use on all my plants (except the orchids, which get their own thing). Use something with trace elements; they're prone to mineral deficiencies.

I think it's in a short 10-inch (25 cm). I don't remember for sure. It probably needs to be up-potted again, though; it's been drying out faster than I would like.

If anyone is interested, there are instructions on how to prepare the beans once harvested in the book "Growing Tasty Tropical Plants* *in any home,anywhere" by Laurelynne G Martin and Byron E. Martin.

Basically, it involves cleaning, soaking, and drying the beans, followed by roasting in a popcorn popper.

Jeff, thanks for that tip! I'll be ordering that book very soon. I'll try to remember to post the results here.