I'm not planning to bring back the Saturday pet pictures as a weekly thing -- it winds up being a lot more work than you'd think -- but it's been a long time, so. 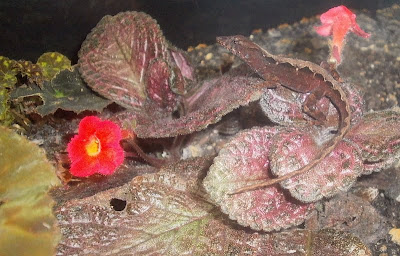 Nina's been fine. Or at least she's been fine as far as I know: sometimes it's hard to tell.

Post-replanting, some plants have done well, and others haven't. The Episcia 'Coco' has been happy, as you can see, though the crickets do nibble at it (hence the hole in the leaf in the bottom left of the picture).

The Murraya paniculata is in decent shape, too; the crickets leave it alone, and it's produced a little bit of new growth. I'm a little concerned that the terrarium may not get enough light to keep the Murraya happy, though.

The Begonia 'Tiger Kitten' has had a more mixed response: the stuff on one side (labeled 1 and 2 in the photo at the above link) has been growing well, and is producing a lot of new growth; the stuff on the other side (6 and 7) has died. One of those (I think #6) was basically completely devoured by the crickets, who prefer Begonia to Episcia. I'm not sure what happened to the other one.

The Ctenanthe burle-marxii (3) that I was sure would do fine was the first plant to die, and I'm not sure what happened to it. I might try to replant it, since I do have others, but I also might take this as a sign and leave it open, or try a different plant. I may have Aglaonema 'Peacock' cane segments rooted in a little while; that's probably the leading candidate if I decide not to replace the Ctenanthe. 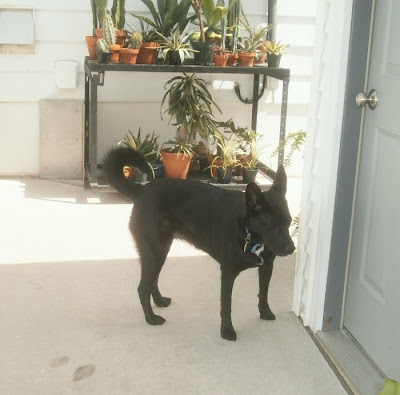 Sheba, meanwhile, has been having another round of allergies, worse than those in the spring. We did have the vet look at her (we were there anyway for the annual Bordetella shot), and he said he thought it was just allergies, and that we should get her 25 mg of Benadryl twice a day if this continued, and that would probably take care of everything. Which was fine, but then we didn't immediately run out and buy the Benadryl, because this had gone away on its own previously without any intervention. So Sheba's gotten noticeably more uncomfortable (as of Tuesday, when I'm writing this), but we're working on it. A large part of the issue might be that it's ragweed season, and I've just found out that the husband has been walking her near weedy areas. I mean, not that the pollen doesn't get everywhere, but we might be able to limit her exposure a little bit.

Oh joy! Nina and Sheba together! I know this is a plant blog, but I've really missed seeing your girls.

They are both beautiful. It's nice to see photos of them again.

I keep generic Benedryl on hand for my dog. It does a lot to soothe his itching and biting. I only give it to him when I see him biting his feet.

If you haven't started it, you should. You'll see the difference in 24 hours.

We had started Benadryl by the time this post went live. Last Thursdayish. I don't know if I'd say we've seen a difference yet or not, but we've also been using it inconsistently, so.