I realize that most of you probably do not care even slightly about these things, and that you probably make tsk-tsk noises with your tongue, roll your eyes, or make jerking-off motions with your hands whenever I do this, with the specific response depending on your age and gender. And I'm sorry about that. If you object strongly enough to want to do something, start by contacting your local orchid society. Ask them if you can give them a brief presentation titled Why Proofreading Your Show ID Tags Is Important 'Cause Seriously, It's Like Six Words Max, And How Can You Be So Busy That Proofing Six Words Is Some Kind Of Major Imposition, Goddamnit, You Assholes.1

Oh, and it's pretty: 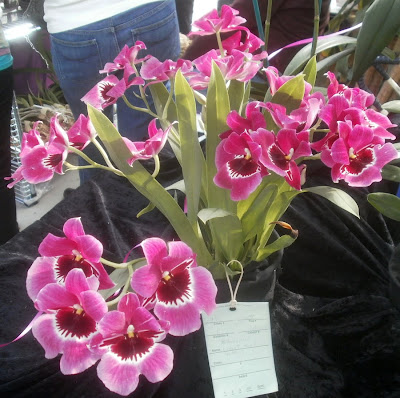 In other news, we have a Scalepocalypse 2012 update:

The scale on the Aspidistra was different than the ones I'd been seeing previously (small and black, instead of large and brown), which could mean that it's something other than scale,3 or it may mean that there's another scale infestation on top of the three I was aware of already.

There's some good news, in that I think the Philodendron scale was discovered quickly enough, and treated aggressively enough, that it's probably over. I also haven't found new cases of scale in the plant room for quite a while, though I'm hesitant to say that that one is definitely over. They could just be regrouping.

1 (I'm waiting to hear back from the Illowa Orchid people, but I'm optimistic that they're going to want to hear what I have to say.)a
a (I have not actually contacted the Illowa Orchid Society about this, nor will I.)
2 Some websites say the proper orchid abbreviation for Miltoniopsis is Mps, not Mltnps., but those people are wrong. I think. Which brings me to my second orchid-related lecture series, No You Don't Get To Invent Your Own List Of Abbreviations All Willy-Nilly Just Because You're Too Lazy To Look Things Up.
3 Like maybe mechanical damage? I've been fooled into thinking that I saw scale on Euphorbias and Ficus benjamina before, when it was really only dried sap from minor wounds. Unlikely, but it'd make me happy if this were what was going on.
Posted by mr_subjunctive at 3:00 AM

I heartily approve of making corrections when it is something that matters to the person who has made the error. As you know, I've corrected your (extremely rare) grammatical errors because I know you really care about language. People who grow plants for exhibition ought to care about getting nomenclature right and should graciously accept correction. Is there a way you can contact the growers directly?

No. In most cases, there's no information posted about who owns the plants at the show. Even if there were, I can't know that the tag is wrong until I get home and look it up with Google. Even if I had a name at that point, it'd be weird to contact people to tell them they'd left out a "T" in the tag for an orchid show that ended two weeks ago.

It's possible that I could e-mail the orchid society that puts the show together, but I'm not sure what I'd say to them. It's big enough to irritate me, but small enough that actually saying anything to anybody would feel like an overreaction.

I clerked at a gesneriad chapter show, once. I suggested to the judges that a particular entry (a particularly stunning one) should be marked down a single point because the person hadn't italicized the scientific name in the educational card required for that particular class.

Presenting scientific names and hybrid names correctly is important, even more when it serves an educational purpose for the public at large, even passively by just having tiny ID cards near entries. Encouraging entrants to be more conscious of current names and naming conventions will help with presentation consistency, allowing interested members of the public to more easily access information about that plant they saw somewhere that one time--if it's consistently incorrectly labeled, those interested members of the public could easily be dissuaded from further exploration because of the confusion discovered while trying to find more information about an incorrectly labeled plant!

Okay, so perhaps that's a little unrealistic of a scenario. But I'm an editor, and I have to defend the values of my profession. (Please excuse any typos, 'cuz I'm too lazy to proofread.) (That was funny, 'cuz we railin' on folks who do just that.) (Also, no typos that I saw. I proofread, despite the technical difficulties of doing so on this page using my iPhone.) (Because grammer imprtante.)

Thank you for making note of the existing spelling errors on this stunning orchid named after my father Lennart Karl Gottling. Much appreciated, Karl D. Gottling, Maui, HAWAII