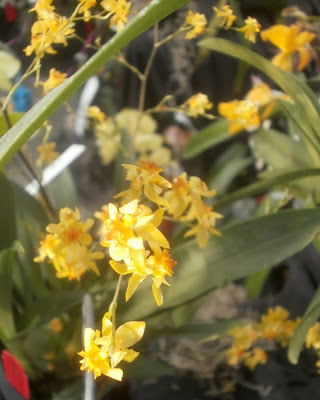 [Taps microphone] Is this thing on?

Not a lot of comments lately. What would you like me to be writing about?

What are all the things you're trying to grow from seed you collect from your plants? What's interesting--what's not worth the effort for you? What plants self-pollinate of those you're harvesting seed from, what ones have you crossed yourself, why, and which ones didn't work--and perhaps why not?

Sorry, I'm not a big orchid fan. I have a few, but I'm mostly bent on keeping them alive with no hope of seeing another bloom.

I do love your snark, and enjoy hearing about the problem plants as much as the successful ones.

Will take under advisement. (Though I think I've posted about pretty much everything I'm trying to grow from seed already, to one degree or another.)

How do the comments/stats on views compare with four years ago? People are kind of distracted by the election and that may account for the drop.

Sorry, mr_s, I guess I've just been lazy about commenting lately. My bad!

I usually consult your site, notably the "Plants I've tried" page, when I have brought home a new plant.

It seems to me that you have stopped writing those comprehensive "profiles" on certain plants - that you did around 2008.

Nevertheless, I would love to hear what you have to say about the following plants:

I read everything you write and enjoy it, but I don't comment unless I have something to say. Which I often don't.

I agree that it would be great if you would write the in-depth plant profiles like you used to.
Your profile on ledebouria introduced me to the plant and was the reason I have one today.
The orchid photos are nice to look at but since I haven't grown most of them, there isn't much to say about them.

I'm getting more unique visitors than I did a year ago (about 150/day more now), but slightly fewer comments per post. (I don't have a good sense of how many fewer, though; Google keeps track of the numbers but doesn't present them to me in a form that's particularly useful for comparisons.)

I mean, I'm also not writing as much as I used to, and half of the time when I do write, it's just a picture of an orchid without much of anything else, so I totally understand why people might not be finding the blog as comment-worthy as it once was. Time is part of the problem, but another part is that it's hard to come up with ideas for things to write about that I haven't already covered somewhere. Hence asking for ideas.

I'd intended to keep writing the profiles; I was just going to try to write some that I could sell through the blog somehow. The specifics of the business plan were sort of vague, but I knew that the first step was going to be that I'd have to write some profiles, so I focused on that.

I had problems with that pretty much immediately, because I couldn't figure out how to keep up with watering everything and updating the blog while also writing something else on the side. Then spring happened, and I was putting a lot of time into trying to arrange plant sales and get them mailed off. Then the scale became a problem, and I was either dealing with that or hating plants so much that I didn't want to write about them. Then it was fall, and I had to bring all the plants inside, which wouldn't have been that big of a deal except that they were, you know, bigger than they were when I first brought them outside, so I spent a few weeks trying to sort out where they could all go. So in theory, I'm still trying to work on profiles; it's just been the worst year ever to try to do that.

Pellaea rotundifolia probably isn't going to be one of the profiles ever; it only lasted three months here, and never seemed to be in a particularly good mood during that time. The other profiles you suggest could happen at some point, though, maybe.

My current lack of a computer makes commenting a pain in the butt. ::sigh:: smart phones just aren't the same.

Talking about watering. An article about your watering "philosophy" would also be interesting. The fact that you normally water your plants only every two weeks is still amazing to me - although completely understandable due to the amount of plants that you have at your home.

I only have tenth the amount of your collection and I usually check my plants at least every other day, if not every day.

Some plants I have to water almost every day (Musa accuminata, Monstera deliciosa, Begonia hatacoa Silver Leaf, etc.) - at least during late spring, summer and early fall. When I am watering, I usually give my plants only so much water to keep the soil moist.

When I read one of your comments, stating that you normally water your plants every two weeks, I was simply flabbergasted.

What about plants you have propagated for sale or trade. What has worked out well and what has flopped for whatever reason. I remember you mentioning dumping out some stuff that no one seemed to want. Also what surprised you with its popularity.

Call me weird - but i love catching glimpses of plants in movies and TV shows. Especially when they're used inapropriatly. Remember last season in 'Breaking Bad' when the plot hinged on the Lilly of the Valley.. growing in a pot.. with flowers and berries.. at the same time? WTF, ammirite? Surely you notice this shit too. I'd love to read your take on these shenanigans.

Hey I'm still reading every word you write, just been laying low on plant stuff lately as I got sidetracked into the aquarium scene. It's funny seeing the difference between fish guys that are getting into plants and plant guys that are getting into fish. By the way, I caught a few mentions of you on aquarium forums when the subject of ripariums comes up (tanks designed to mimic a river's edge with emersed plants in hanging planters at the water line). One of the guys that popularized that style of tank quotes you fairly often. I like it because not only is it a new setting in which to use houseplants, but you can take aquarium plants out of the water to see their emersed form, which is often totally different than what it looks like underwater. A list of houseplants you think would work in this type of setup would go over like gangbusters, most of those guys are still doing trial-and-error and killing a bunch of plants that they really should've known wouldn't work out. I'm having wonderful success with Spathyphyllum, Dieffenbachia, Aglaonema, and Syngonium, but for some strange reason any Tradescantia or Ipomea I put in there rots away in a couple weeks- nobody else seems to be having that problem with those species.

Anyways, glad to see ya more motivated to keep this up. Talk to ya soon.

Also, how are the anthurium seedlings doing?

I'm not sure I could be much help with something like that; I haven't tried to do it myself, and although I know of several plants that will grow okay in water for some period of time, I don't know of many that will grow in water-saturated soil. The plants that survive in this house tend to be those that like to get dry regularly, not wet.

In other words, that may be too far away from my area of expertise.

The Anthurium babies are doing okay. I've started 288 so far, of which 275 are still alive. They're all between 5 and 15 months old now. I've been doing lots of crossing this spring and summer, and it looks like the first berries from those will be ripe in November or December.

My main concern at the moment is that I'm not going to have enough pots. I've been buying used ones from the ex-job (from any 3-inch plants that die on them, or that they take out of the grower pots to make a group planting out of), but they don't have as many of those as I'd like, and the pots they sell new are just slightly too big to fit the trays I've been using.