I tried to get a picture of Nina yesterday, but I did something dramatic with the camera that freaked her out. She ran away, under the Episcia, and then when I tried to nudge her out of there she ran into a corner. And I do mean ran into a corner. She hit the wall and then tried to continue running for a bit even though she wasn't getting anywhere, before deciding that that wasn't working, so obviously the thing to do was to try to intimidate me instead.

Sadly, none of the pictures turned out particularly well. This was the best one: 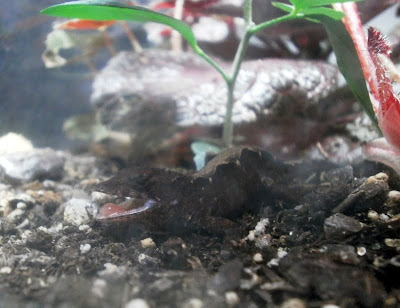 She's got her mouth open and tongue out, she's arching her back a little, and for a while she was doing something with her throat that I can't really describe, though she doesn't seem to be doing it in this photo. (Male anoles have a dewlap that they can extend during courtship; she sort of seemed to be doing that, except I don't think she actually has a dewlap to extend, and I couldn't really see it very well to begin with.)

Just in case anybody was worried: she calmed back down once I went away, and appears untraumatized by the experience.

Was it the flash that freaked her out? Pets can be so dramatic sometimes, lol. :)

Oh dear! Looks like she was trying to make herself look as big as possible.