I approve of this one. Though the tag was mildly incorrect (it said Paph. sukhakuli, not sukhakulii), the name Nina is in there, so it can't be all bad. And it's a pretty minor error, in the overall scheme of things: Google can still find it. So we'll count it as half an error. 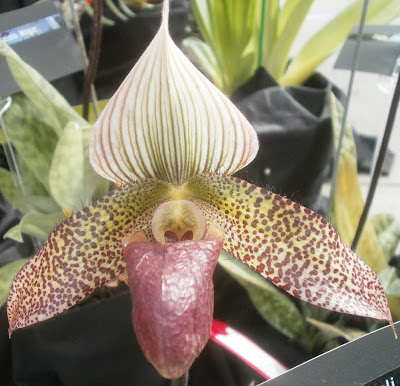 Both parents look a lot like this, which is a bit disappointing. (I realize there are reasons for crossing orchids besides their appearances, and that people who are interested in orchid hybridization might well have super-specific goals in mind when they do their crosses. I just enjoy it more when the parents are more distinct, is all.)

Meanwhile, in Scalepocalypse news, after about 6-7 weeks without any new sightings, leading me to think that maybe it might actually be over, I've found scale on Anthurium baby #48 ("Autumn Bahn"). So not only is the scalepocalypse not over, but it's continuing to spread -- the Anthuriums hadn't been affected before this. Goddamn. The really depressing part is that the reason I noticed this was because I was up-potting a set of Anthurium seedlings that had been growing particularly well. So I went from feeling good because some of the Anthuriums had been doing well enough to graduate to bigger pots, to being depressed anew about the scale.

I threw some of the imidacloprid granules into as many of the Anthuriums as I could; the rest will have to wait until I can buy more imidacloprid. Probably I'll end up dosing everything in the basement before all this is over.

It's not like I was expecting 2013 to be a great year for me or anything, but I don't normally get a shot across the bow like this on the very first day of a new year. We're going to have to keep an eye on 2013.

(EDIT: And then I found scale on two of the Alworthia 'Black Gems,' and the Manfreda undulata 'Chocolate Chips.' Then I stopped watering 'cause I didn't want to find any more.)

What a bummer. The stupid bugs could've hid to give you at least a few days of peace at the beginning of the year. Jerk scale.

How are you getting them? Are you coming directly to the site or getting them through a feed or what?

I just want to say thanks for very useful blog about dracaena fragrans. I was wondering what to do about my plant that is taller than me and mostly just long naked stem. Now I am much wiser :) and look forward to experiment with cuttings and stuff.

From the site. I was afraid Santa kidnapped you for being naughty!

I have no explanation for the posts disappearing; I haven't changed anything about the blog, and they were showing fine for me when I checked during that time period.