Okay. So there's this disease, called citrus greening or (in Chinese) huanglongbing. It's caused by a bacterium, and spreads between plants via insects (the Asian citrus psyllid or the African citrus psyllid). And it is a big deal.

Plants affected by huanglongbing produce stunted, inedible fruit, and a lot less fruit than usual, so the disease makes plants economically worthless. Then it kills them. Affected plants typically die within 3-5 years after infection. Infected plants can also spread the disease to other plants before they die (if the psyllids are present to transmit the infection between plants), and don't always show symptoms immediately. Huanglongbing is also, at the moment, incurable. So this has some obvious bad implications for the U.S. citrus crop.

I tried pretty hard, but was unable to figure out from the USDA site exactly what products are being quarantined, where cases of citrus greening have actually been reported, or how long the quarantines have been going on. It looks like the first U.S. cases of the disease were in Miami-Dade County, Florida, in 2005, and the disease then spread to basically the entire state by 2008. Citrus fruit itself is not considered able to transmit citrus greening, so the fruit can still be shipped around the U.S., so long as it's been carefully inspected for leaves and stems that could conceivably spread the disease.

Currently, the only thing anybody's really able to do is try to prevent the disease from spreading, by quarantining states in which the disease has been found. There's also increased pesticide use, as people try to pre-emptively wipe out any populations of the psyllid before they manage to spread the disease. Neither of those are great long-term solutions, though.

As for a cure, well, we don't have one yet. They're experimenting with antibacterials like penicillin, so we should have penicillin-resistant huanglongbing bacteria any day now. I don't get the impression that that's been working out terribly well so far. Adding systemic pesticides to affected plants doesn't work so well either.1 There's a more promising-looking plan to genetically engineer citrus plants with genes from other species (spinach was the one mentioned on the one page I saw), which would render them resistant to the disease and make the whole problem commerically irrelevant.2 There have been some promising results from growing guavas in the same fields as the citrus; the theory is that the guavas may produce compounds that confuse the psyllids and leave them unable to locate new citrus plants to infect. There is also a parasitic wasp, which has been introduced in some citrus-growing areas and seems to be potentially useful for keeping psyllids in check. So one way or another, we should have this problem solved eventually. And maybe guavas will suddenly be abundant in the stores as a side benefit.

However, this has caused a few troubles in the tropical plant industry as well. Our supplier, at the garden center where I used to work, is based in Florida. So when the quarantine went up in January 2008, we lost the ability to bring in pretty much anything from the whole citrus family (Rutaceae). So no Citrus, no Fortunella, no Murraya, and that was still the case when I quit working there. Customers didn't like that at all, so the garden center scrambled to find replacements. They got a few citrus plants from California, through the outdoor shrub and perennial suppliers, but not very often, and the ones they did manage to get were often more expensive than the Florida ones had been.

I've also seen citrus a few times at Lowe's, though I assumed that those were probably also from California or Texas.

But the point is, I had more or less given up on seeing anything citrusy in the garden centers up here, and especially anywhere that I knew got most of their plants from Florida. And yet, a month or two ago -- 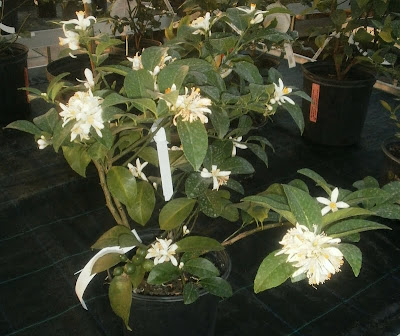 Citrus x meyeri, Meyer lemon.
I'm left scratching my head over what this might mean, though. I'm pretty certain the quarantine on Florida citrus plants hasn't actually ended; the text of the regulations (or what I think must be the relevant text, anyway) is pretty opaque to me. It appears that there are new exceptions made for certain facilities if they're inspected often enough and found to be pest-free on each inspection. And possibly the ultimate destination for the plants is also relevant. 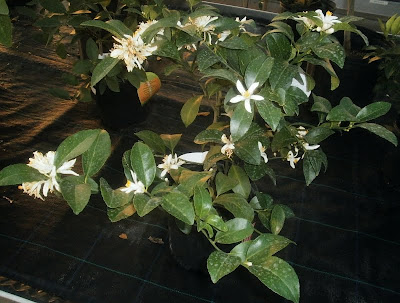 Citrus aurantifolia (lime)? It was identified as a lime, but there turn out to be a lot of different species called limes, and I don't know which one this is.
It's hard to see how citrus greening could get much of a foothold in Iowa, for example, even if somebody screwed up and sent infected Floridian plants here. There aren't that many susceptible plants in the first place, the plants we do have don't generally stay close enough to one another to transmit diseases, and the odds of transporting the psyllid and an infected plant at the same time, and having them wind up in the same place, seems like a long shot. On the other hand, people do move south from Iowa, all the time. So I just hope the USDA knows what they're doing. 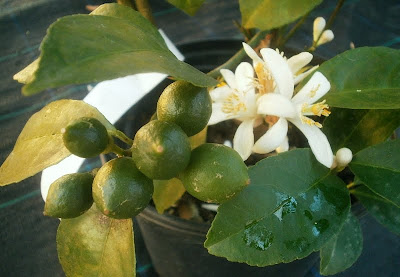 Citrus x meyeri (mis-saved as C. aurantifolia; ignore the file name)
In any case, it's nice to have them around again. I don't have any particular desire to own one, and couldn't afford the money or space for one even if I did, but considering that I never expected to see them for sale again at the ex-job, this was a pleasant surprise all the same. And it's also nice to have a chance to smell the blossoms again -- Murraya paniculata is similar, but it's not the same.


1 Not for the reason you might think. Remember, if a plant has huanglongbing, it's not going to be producing usable fruit in the first place, so nobody's going to be eating the fruits that are full of insecticide. The depressing truth is that the imidacloprid doesn't work fast enough to kill the psyllids before they jump to another tree, so it doesn't actually stop the problem.
2 Though if you've got a citrus tree growing in your backyard, you'd still be totally boned. I imagine regular citizens aren't going to be able to get the transgenic trees.
Posted by mr_subjunctive at 3:00 AM