I want to note, first off, that this does not necessarily mean I'm returning to regular blogging. Very little is going on here, and what is going on is mostly not good, so I'd prefer not to commit myself just yet. However, there is a tiny bit of news, in that I've potted up the Spathiphyllum seedlings from last October/November. (Previously seen on 31 October, 5 December, and 18 December.) 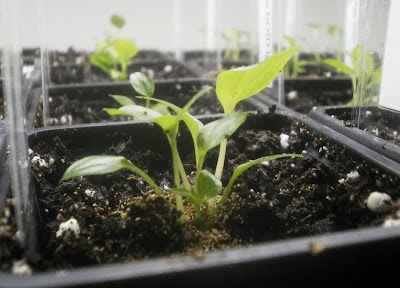 I normally wouldn't have potted these up quite so early, but 1) there was something growing1 on the surface of the vermiculite, in some of the other sections of the germination container, and I didn't want it to reach the spaths even though I wasn't positive it would hurt them, and 2) they were getting big enough that I was concerned about them shading one another to death like a bunch of drag queens.2 Potting them up now (17 January, technically) is a gamble, but it seemed safer than leaving them where they were.

Spathiphyllum seedlings grow faster than Anthurium ones do. It's not a huge difference, but there's definitely a difference. It's especially noticeable with the roots: Anthurium seedlings are often content to grow a single thick, short, brittle root and then focus on leaves, often taking four months or more to add a second or third root. Spathiphyllum seedlings produce three to five long, thin, silky-looking, flexible roots pretty much immediately, and apparently never stop adding them. 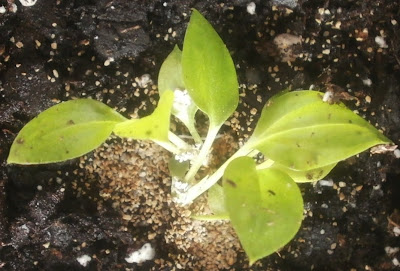 The sandy-looking stuff in the center is imidacloprid. The best place for these at the moment is in the basement, and the basement is not yet definitively free of scale, therefore the seedlings get dosed just like everything else down there.
Aside from the difference in speed, though, Anthurium and Spathiphyllum have remarkably similar-looking seedlings. The Spathiphyllum leaves are lighter in color, which was unexpected (the one known parent was just your basic medium green, not as dark as peace lilies usually are, but considerably darker than the seedlings), and there are some subtle differences in leaf texture (Spathiphyllum leaves are thinner and more flexible, just like in the mature plants), but I wouldn't be able to tell which was which at a glance.

I can't report anything definite about the germination rate, because I didn't record how many seeds I started in the second batch, from 1 November. The first batch had 8 seeds, of which 6 germinated, and 4 got transplanted. The second batch produced 46 seedlings that were transplanted, from an unknown number of seeds. In addition to those 50, I also threw away 5 seedlings that had germinated but looked too small to bother with.3 So that's 55 viable (?) seedlings from a single inflorescence. 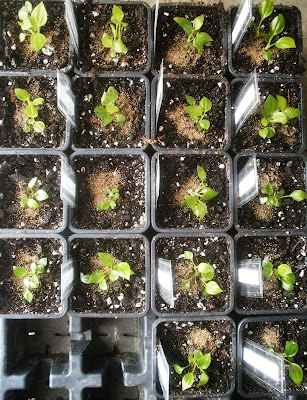 If I were trying to create my own special Spathiphyllum cultivar, I suppose I should have potted the seedlings individually, one to a pot, but since I'm not, and since I expect some of them not to survive transplant, I put most of them three plants to a pot.4 If one of them happens to do something really cool, in theory I can rip the other ones out, or get it tissue-cultured, or whatever. But probably none of them will do anything really cool anyway.

The next step in the process, I suppose, is to grow some of the seedlings to blooming size. There's little information available about how long that might take; the one site I found that addressed it at all suggested that they might be mature enough to bloom in two years. So those of you who are following PATSP strictly for Spathiphyllum seedling news should check back in late October 2014, I guess.


1 (or possibly dying)
2 For those in the audience who don't know: 1) you should be watching RuPaul's Drag Race, and 2) "throwing shade" is slang for insulting another person, though it's a specific kind of insult-throwing. Like, if you ask Mariah Carey for her feelings about Madonna, and she says, I don't listen to Madonna, that's an insult to Madge, but it's also not really throwing shade. It's too direct, and there's no cleverness to it. On the other hand, if Mariah says I really haven’t paid attention to Madonna since about like 7th or 8th grade when she used to be popular (something Mariah has apparently actually said), that's shade. It's basically a difference of style, I guess? And insult density? The first sentence is just a plain, unadorned insult which is also a statement of fact; the actual Mariah quote contains three insults: I don't listen to Madonna, Madonna's way older than me, nobody else likes Madonna either.
I don't know. I'm probably not the right person to be trying to explain this, since it's not actually a term I use in everyday conversation, but that's the basic idea as I understand it. This is a long way to go to explain something that was a fairly stupid pun in the first place, but you know me: always willing to go the extra thousand words to explain a joke that wasn't particularly funny to begin with.
3 Considering how many seedlings I had, and how I don't even especially like Spathiphyllums in the first place, I felt like I could afford to be choosy. I threw out about 60% of the Schlumbergera seedlings I potted up on the same night, because I had the same problem with them but worse.
4 That's maybe not a smart assumption. With the Anthuriums so far, the transplant survival rate has been 286/310, or a hair over 92%, though some of those are still pretty young. It could eventually fall to 85-88%. With the Schlumbergeras and Aglaonemas, I think I'm at 100%; with Columnea orientandina it's in the neighborhood of 20%. So it's tough to predict what will happen to the Spathiphyllums.
Posted by mr_subjunctive at 3:00 AM

ok but your explanation of "throwing shade may have been even funnier because of the excess. just sayin

One for the devil, one for the crows and one for you. Not that I expect you have crows in your basement, of course.

Old saying when planting three bean seeds (or is it seed beans?) to a position.

Random plant event, I have not heard of anyone else using that term as well lol. That is my fav term to use when any of my clients show me a garden that is self seeding. I had an interesting experience last year with a bag of potting mix I brought to pot up a citrus tree. Within 2 weeks of planting the tree in the pot it started to sprout the tastiest fancy lettuces you have ever tasted. About 6 different varieties in total. Gardening really is full of surprises. Great blog.

I loooved footnote 2, and the pictures, of course.