In May 2011, I, not knowing any better, bought an orange-blooming "Easter cactus" (Hatiora cv.1) at a garden center in Iowa City. And it looked like this. 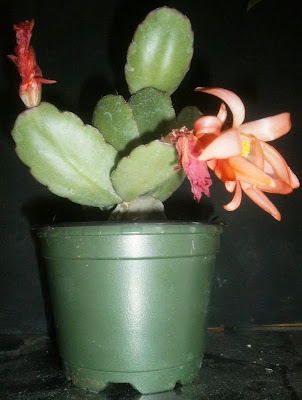 Pot: 4" / 10 cm.
It's grown much bigger since then, and although it loses segments from time to time, it's held together much better than the magenta-flowering one that I got in the mail a week after.2 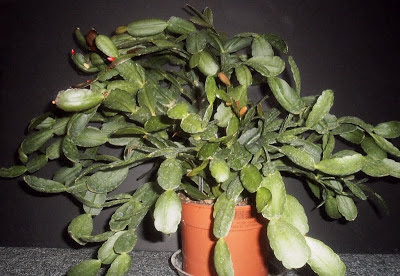 Pot: 6" / 15 cm.
I haven't been worrying about getting flowers, because I figured just keeping it alive was good enough for now. But about six weeks ago, I moved it into a larger pot, because it kept drying out and tipping over before it was in line to be watered again. And now, suddenly -- 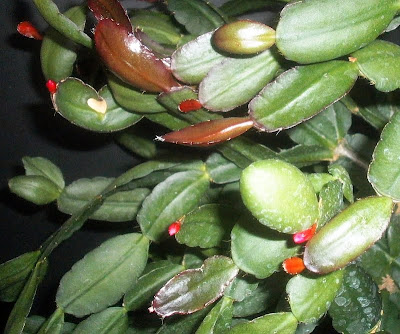 Granted, they will probably drop off before they open, because that's how things seem to be going lately. But still -- it's almost enough to know that blooming is possible. Dare I even hope for actual flowers? It almost feels greedy.


1 (Formerly Rhipsalidopsis, and still better known as Rhipsalidopsis, but my understanding is that Rhipsalidopsis has been moved into Hatiora now.)
2 The magenta one shattered badly once, after which I divided it into four pots. Of those four, none have grown much. One disintegrated completely. Another did okay for a while, but is in the process of disintegrating now. I'm not sure why there's been such a large difference between the two varieties; they got basically the same care to begin with.
3 The three other things that look like flower buds are just very young stem segments; they begin red and then age to green.
Posted by mr_subjunctive at 3:00 AM

Congrats on buds! Why dropping? If you will not move or turn the pot or change conditions - they will bloom. This plant doesn't like to change its light orientation once the buds are set. But I am sure you know it.