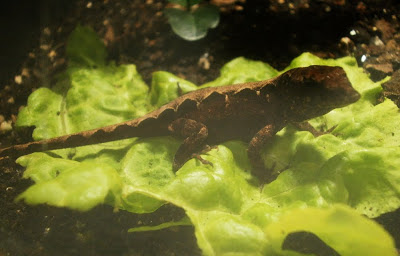 Nina on a bed of lettuce. This is from last summer sometime; I can tell because that's some of the lettuce we grew in the back yard. I'm not sure it was worth the effort. There was too much of it, and the more time we spend trying to grow plants outdoors, the more I think maybe it's just not for me. I mean, it always seems like a good idea, in the winter. Why would we not want to be able to go to the back yard and pick our own produce? And it'd be so economical!

The reality of it is that we have yet to come out ahead, financially, any year we've tried. The corn verged on inedible (either because it got pollinated with the field corn just behind the back yard or because we waited too long to pick it). The raspberry cane died before we got it planted. The husband wouldn't eat the tomatoes because of concerns about them being in a spot where treated lumber had previously sat (and I don't like raw tomatoes, so they were always going to be useless to me personally). I don't especially like lettuce or spinach, and we overplanted it besides. The peppers were swallowed up by weeds and never seen again. The strawberries were too young to produce the first year, claimed by the birds and squirrels the second year, and had just been set back by moving the third year. So far, outdoor food gardening looks like a ton of work for basically nothing. (If only we could eat Cannas. We'd never need to buy groceries again.1) 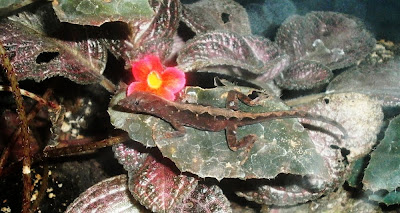 Nina more recently. I think she was trying to be flirty, by sticking the Episcia flower behind her ear, but then realized at the last minute that she doesn't have external ears to tuck flowers behind. 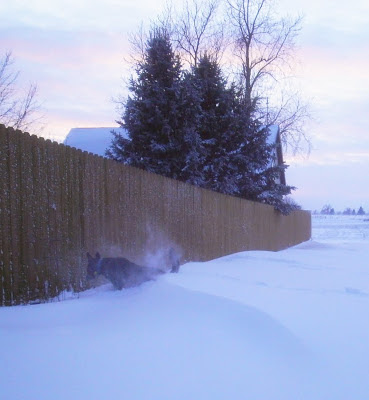 Sheba and I don't agree on much. After straining to think of as many things as possible, I came up with these: we both think that her dog food (Pedigree, canned, "with chopped beef" variety) smells delicious,2 we're not crazy about fireworks or small children, and we both enjoy popcorn, bread, the husband, and snow. 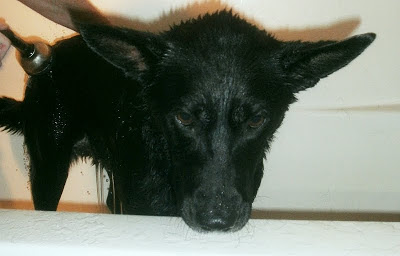 Sheba got a bath last week, in preparation for a visit to the vet.3 When we first got her, she'd spend the whole bath trying to escape, which made washing her pretty challenging. Now, she goes kind of catatonic and can barely be convinced to move. (I guess that's an improvement?) This is her bath time thousand-yard stare.


1 Probably an exaggeration. But Cannas would be much more helpful than any of the other stuff we've tried, considering how fast and how well they grow. Check out what the husband dug up last October:

As for whether Cannas are edible, well, apparently they actually are. Or at least some of them are. I don't know how to prepare them, and it's not clear that they'd be any good, since they've been bred for looks, not taste. But eating Cannas is apparently a thing people do actually do.
2 No. Seriously.
3 Bad news: the beginnings of an ear infection. We caught it early enough that it shouldn't be a big deal, but still.
Posted by mr_subjunctive at 3:00 AM

Request for help
First off I want to say thank you for your wonderful blog, what a great resource for a beginner home gardener such as myself.

Secondly, I want to ask for your help. I have a papyrus plant that I love that appears to have fungus on it, and never having dealt with this before I don't know what to do. I would much prefer not to toss the plant but find a way to save it if possible, but don't know what to do and internet research proved fruitless.

Please help! Could I send you a photo of the plant and get some advice? Any help would be greatly appreciated.

Feel free, though you should know I haven't been having the best time with fungus myself lately, so my advice may not end up being very helpful.

I've often wondered about how to eat Canna, and whether all of them are edible. At the ex-job, we spent a lot of time each winter cleaning and dividing Canna rhizomes, and I always wondered if I should "accidentally" slip one piece into my pocket to try it... never was brave enough, though (brave enough to eat it, I mean. Wouldn't have that much trouble with nicking anything from that place.)

I know it's been a year, but Ivynettle might find this interesting. Given the (non)taste of arrowroot powder, I'm not sure I'm interested in baked Canna roots!

Oh darn, I think I forgot the link. If so here it is: http://www.eattheweeds.com/canna-confusion/