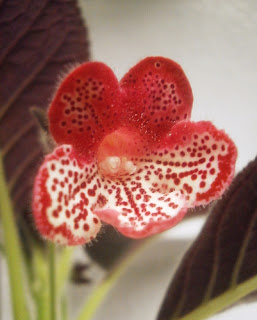 I've had Kohleria 'Queen Victoria' since May 2011, and it has not always been clear, in the two years since, that I was going to continue to have it much longer. My watering frequency is not quite often enough to handle some of the needier gesneriads. But it's been coming back in a big way since a repotting (last summer? fall?), and I honestly had no idea that it was even thinking about blooming. I just happened to glance over at the shelf in my office, saw what I thought was an unusually large Episcia flower, and then realized -- that was no Episcia. 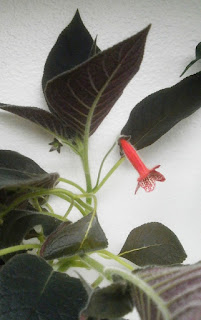 So this is fun. I don't think they're self-fertile, so I won't have seedlings or anything, but it's new, and pleasant. 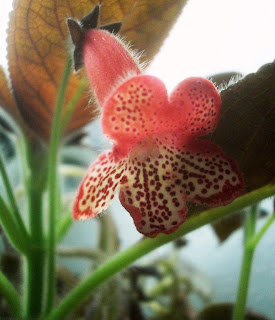 That's beautiful it looks so out of place - such a large red flower growing out of a normal green - vegetable looking plant!

Lovely flower! How huge is the plant?

Minimally? I'd say it's minimally huge. The pot is square, 4" on the diagonal, and the biggest leaves are about 3-4 inches long, maybe 2 inches wide. I don't know how long the stems are, because they're branched and curled around one another and lying horizontally and various other things.

It's fun when flowers happen that you don't see coming. Even better are the flowers that you didn't see coming and had never seen before. Indeed very true.

If it's anything like a eucodonia or achimenes and it's a happy plant, then this will just be first of many blooms. The 2nd photo shows another bud. Sure looks like its kin in the photo.