As I predicted, the Cryptbergia seeds (or at least "seeds" -- I'm not sure we ever definitively proved seediness) have all failed, due to some combination of fungus and incompetence. Womp-womp. 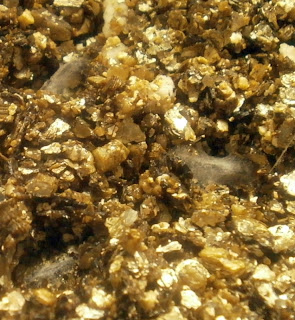 Not much else is going on here, really, which I guess makes it a good time to look through the back posts and see if I have any updates about them. All these are from September 2012; turns out there were no posts in October or November that require follow-ups.

Nothing ever came of the Canna seed. Not really surprised by this, though. More surprising: the Begonia 'Tiger Kitten' has more or less completely taken over the terrarium. I think this is mostly because it's more drought-tolerant than the Episcia 'Coco' was. (I have a tough time knowing when to water the terrarium, because it's less convenient to actually touch the soil, and every time I open the lid I'm convinced that Nina is going to take that opportunity to jump out and run into the living room, where Sheba will eat her. So I don't open the top very much.) The Peperomia puteolata is still present, as is the Murraya paniculata seedling, but overall, it's kind of a mess. And I sort of wish that the crickets didn't eat the plants so enthusiastically. I mean, I understand: they're crickets. It's what they do. But it's just depressing, with all the dead leaves, holes, ragged edges, and what have you. Perhaps I am not emotionally stable enough to keep anoles in a planted terrarium. 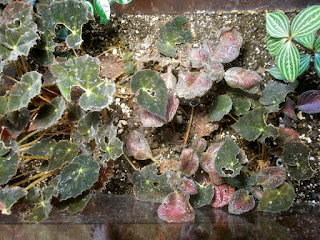 It's taken a while, but the third leaf is now slightly bigger than the second.

Sansevieria cylindrica.
Come back in late 2016 and I may have a fourth leaf to show you. CAN YOU HANDLE THE EXCITEMENT.1

The Rhipsalis seedlings are still alive, and are slightly larger than they used to be. This is neither unusual nor unexpected, but it's a thing that happened. I wound up potting all the surviving seedlings into two pots together, because it seemed like they were likely to give me a really sparse, uninteresting plant if I didn't put several of them together, and also because it wasn't clear how many of them were going to survive. (As far as I can recall, though, all the seedlings that made it out of the vermiculite have survived in soil, and possibly I should have just started them in soil to begin with.) 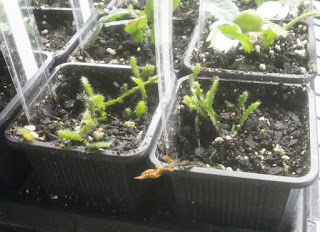 I wasn't expecting this, but so far, 'Zamicro' actually has turned out to be easier for me to grow than the species. I suspect that this is not actually about the cultivar so much, and has more to do with these getting better watering and light (the species plants I've started from leaflets also did well in similar conditions, until they were transplanted), but who can really say. 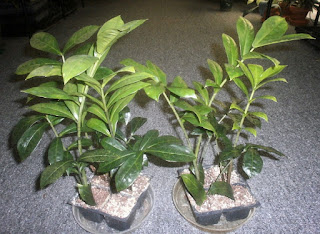 For now, they seem to be happy in their little 4-pack cells, and I'm inclined to leave them there for as long as that seems to be working out. Whenever I do have to transplant, I'm going to take the advice of Steve Lucas at Exotic Rainforest and make an especially sandy and fast-draining soil for them. I am more or less convinced that this Zamioculcas-growing secret I've been missing.


1 NO YOU CANNOT HANDLE THE EXCITEMENT.
Posted by mr_subjunctive at 3:00 AM

I'm sorry the Cryptbergia seeds failed. I think I failed to over winter the brome offsets. Never grew them before, but the offsets look really shaky right now and there are still a few weeks before they can reliably go outdoors where they did okay last summer. Maybe another time. So far winter storage has been more successful than usual, but the fittonia also cratered. No surprise there, but croton 'petra' looks great and that's a first and a surprise. It's an outdoor plant, IMO and has not survived indoors before.

Spores that feed on host plants cause fungal disease. The spores survive in soil, on decaying plant parts and in the digestive tracts of some insects, and can overwinter in warm climates.

Conditions that often encourage fungal growth include too much shade, in which the soil stays moist and doesn't drain properly. Fungi also attack plants that are weakened by insufficient moisture.