Ten(-ish) Things I Have Mistaken for Scale

So we're in the fifth week of checking all the plants in the basement weekly (on the east and south sides) or every second week (on the west). I'm not finding many actual pests anymore, for two reasons:

The first reason is that there's just not that much to find anymore, since any plants with obvious, easy to see infestations were already thrown in the trash.1 The second is that I'm not looking as hard, because it's extremely time-consuming and tedious to do, and I'm tired of it.

As a result, almost every scale insect I've seen lately has been a false positive of one kind or another. And there are many kinds. So here is a list of ten things I have managed to mistake for scale in the last five weeks:

1. Scars -- on everything. Oh my god. You've never imagined how many little tan corky spots there are on the leaves, petioles, and stems of your plants until you've had to check each one individually to see whether it rubs off. And of course there's no way to actually remove them, because they're part of the plant, so I wind up checking the same scars over and over, week after week. This is far and away the largest and most irritating category of false positives. 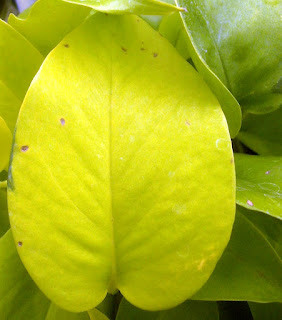 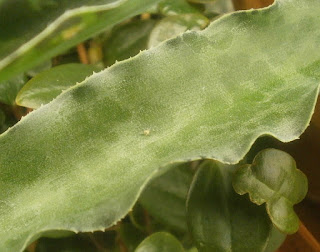 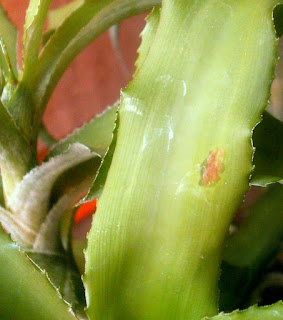 Not actually sure what this thing on a NOID Cryptanthus is, but I think it's either edema, a scar, or edema that became a scar. 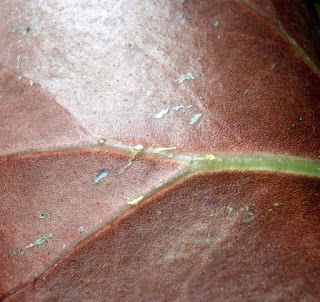 Multiple irregular scars on the back of a Begonia x 'Erythrophylla' leaf. 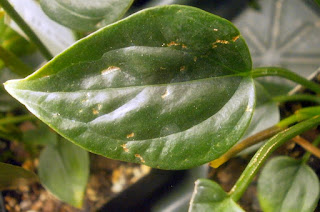 Scars from thrips (?) on one of the Anthurium seedlings.

2. Dots of dried sap -- they're generally the wrong color to be scale, but the size and shape are close, so they have to get checked out anyway. Arguably a subcategory of scars, though distinct because dried sap rubs off. (Usually.) 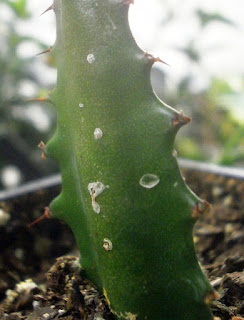 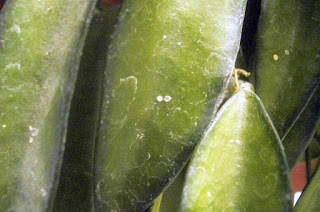 And on Hoya something. (Sold as H. kentiana, probably actually H. wayetii.)

3. Marginal burn, tip burn -- It doesn't happen a lot, but sometimes when a leaf is burnt in just the right way, the dead spot looks like a scale insect hanging right on the edge or tip of the leaf. Since the actual insects tend to congregate around the spot where the petiole attaches to the leaf, on and along the midrib and other major veins, this isn't terribly confusing, but it happens. 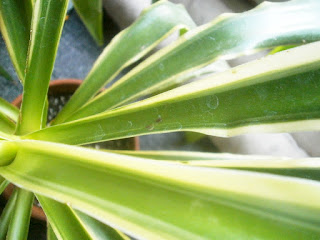 The margin spots on this variegated Yucca guatemalensis didn't make it through the recoloring / cropping process in very good shape, but they're there, along with a more obvious scar in the center of the leaf.

4. Aerial roots -- the shape is often not quite right, but when they're first developing, some aerial roots are small, oval, and tan. Best distinguished from scale by the facts that they don't wipe off and that they're pointy. 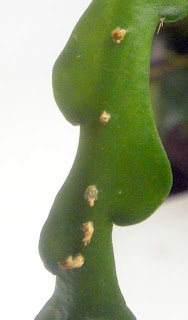 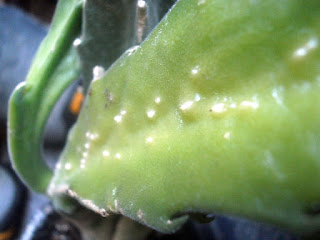 5. Dirt -- dirt gets splashed all over when I water, so some of it ends up on the leaves and stems. Because there's no wind in the basement to blow it off, it stays attached. The irregular shape usually gives it away, but some pieces of bark are rounded enough to be momentarily alarming, and vermiculite is about the right color, so this is occasionally a problem. 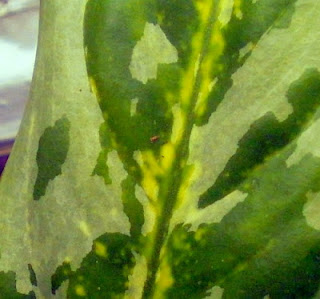 A tiny fleck of potting mix on an Aglaonema 'Peacock' leaf. 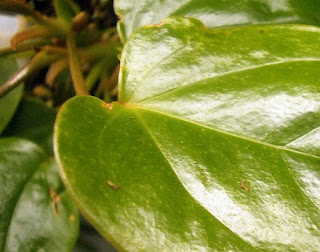 A couple bits of dirt on an Anthurium seedling.

6. The natural coloration of the plant -- some plants just naturally have lots of little bumps or brown spots or whatever. In most of these cases, I've either given up on checking altogether because it's impossible, or the plant got scale a long time ago and has been thrown out. Aerial roots is technically a subdivision of natural coloration, now that I think about it, but it's so common and specific it probably deserves a separate entry anyway. 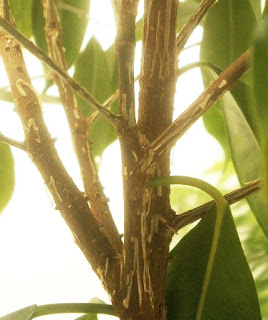 Close-up of a Ficus microcarpus stem, showing peeling bark, aerial roots, and a bunch of other random stuff. 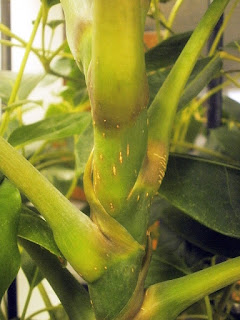 Some of this Schefflera actinophylla's brown spots, if not all of them, are capable of becoming aerial roots if the air is sufficiently humid, but usually they just expand to form bark.

7. Edema -- again, bumps due to edema are usually irregularly shaped, so I don't have to resort to the squish test, but this has still happened plenty of times. 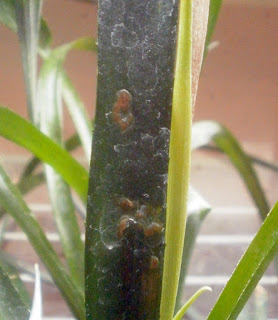 Surprisingly bad edema on a Billbergia nutans leaf, probably because I moved it into a bigger pot and then set it in front of a cold window.


9. Mineral deposits -- parts of the plants that are in contact with the soil will sometimes get a tan, crusty mineral buildup which can resemble a big infestation of closely-spaced scale. Hatiora salicornioides seems to be especially prone to this, but I also see it on Anthurium quite a lot. 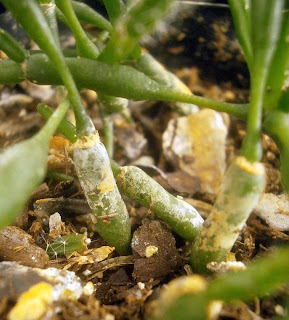 10. Hallucinations -- and occasionally I just straight-up see things that aren't there. Which is usually a sign that I should take a break.


1 The last few scale insects I've found also appeared to be dead already. Or at least they were really, really tired, being flat and dried out and crunchy. One hopes that this has something to do with the imidacloprid.
Although thrips aren't really the focus of the post, for readers who are curious: the thrips are still around, here and there, and when I see them they're generally alive. I'm only finding them in a particular fairly narrow section of the basement shelves, though, and I didn't find any last week, so this is maybe progress. I also got my first thrips photos -- none are very good, but they're an improvement over no photos at all:

The thrips in question was photographed on notebook paper (hence the blue line in the top image), through a tiny magnifying glass lens, if this gives you any sense of the size.
2 I have two Selenicereus anthonyanus plants, one in the basement and one in the plant room, and neither one has ever seemed very happy to be here. Mostly they just don't grow very fast, and the new growth is thin. Likely a light issue, but I don't have any better spots available.
It's weird, because Selenicereus chrysocardium is fine in very similar spots. I don't know what's wrong.
Posted by mr_subjunctive at 3:00 AM

Not finding any actual pests anymore is good news! Hope it stays that way.

Ugh, I found one mealy bug and have since panicked and poked at any tiny whitish dot thinking maybe it's a baby mealy. Mostly it's just old scars, hard water spots, or pollen. Not fun, this post really hit home with me :( I feel for you.

I enjoyed this post as it was completely relateable. I have assumed at least 5 of those things on your list were scale on my plants, which has resulted in me either trashing the plant, or scraping off the skin of the plant with my fingernails when not necessary.

In that same vein, I am paranoid about mealy bugs. I was looking at some of the visible roots on my Stapelia gigantea, and they're white and sort of fuzzy and now I am frantically googling and trying to find out if that's normal or if I have some sort of mealy bug root infestation. Any insight? I know you've had a couple of Asclepiads in your collection at times. Thanks!

That sounds more or less right, but I couldn't say for sure either way without a photo.