DISCLAIMER 1: I was not provided a copy of this book for review by Timber Press, and am a little irritated about this because they knew I wanted one. Instead, I paid for my copy. Like a commoner.

DISCLAIMER 2: I know Tychonievich as an e-mail and blogging acquaintance, and we're on friendly terms as far as I know. (If that's changed, he's neglected to tell me about it, but obviously he's been busy lately. I'm not assuming anything one way or the other.) 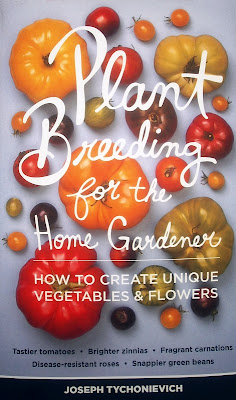 Let's skip ahead to the conclusion, since that's all some of you are likely to care about: I enjoyed Plant Breeding for the Home Gardener a lot. It's not exactly what I was looking for in a plant-breeding book, but I was certainly entertained, I learned things, I will almost certainly re-read it, and I am well satisfied with the purchase. If you are dabbling in plant breeding, or thinking about maybe getting into it at some point, this is well worth your time and money, and you should go ahead and buy it. Now the details:

Plant Breeding for the Home Gardener does two things particularly well. The first is that Tychonievich manages to squeeze a lot of specific information into a pretty short book (216 pp.), and does so without obscuring it in a lot of jargon or oversimplifying it to the point of uselessness.

The second thing Plant Breeding for the Home Gardener does really well is emotional: not only does he tackle potentially intimidating subject matter accurately and clearly, but he makes plant breeding sound like a really good idea. It's fun! It's easy! It's surprising! It's a really good idea if you like looking at flowers or eating food! If you're sort of abstractly interested in plant breeding, but have been intimidated because it seems complicated, technical, time-consuming, or unrewarding, this is a good way to talk yourself into it. If you already were interested, as I was, this is a slightly dangerous book, as it's likely to convince you that you need to devote even more time and space to plant-breeding. (I'm already looking a bit differently at the the Irises we have around the house.)

I had two disappointments with the book, one about the content and the other about the format. Both are comparatively minor.

The disappointment I had about Plant Breeding for the Home Gardener's content is that not one houseplant was discussed.1 It's hard for me not to take that a little bit personally, especially since we'd established some time ago that the universe does in fact revolve around me so this is just careless, Joseph.

I'd thought that at least there might be a mention of African violets (Saintpaulia) at some point, as people breed those indoors all the time, but no. Not even anything about the few outdoor plants I have an interest in,2 or any plants that are even related to the two plants I've been crossing in the house.3 I'd been hoping for something more directly and specifically applicable to my interests. And it's not like there wasn't room: 216 pages. Another 5 pages about Christmas cactus wouldn't have killed anybody.4 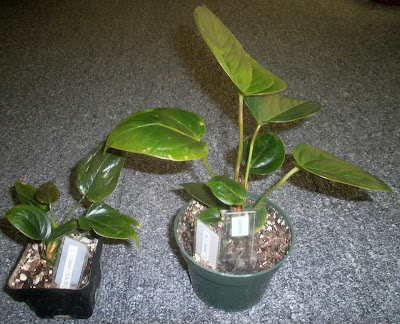 As long as we're sort of on the subject, here are Anthurium seedlings number 2 ("Alexis Mateo," left) and 26 ("Peaches Christ," right).5 These were both started on 18 July 2011, and lived in essentially the same location and received essentially the same care until 1 January 2013, at which point Peaches was repotted. Why is Alexis lagging so far behind? No idea.
The formatting disappointment: the section on genetics would really have benefited from a diagram or two. The rest of the book was a really easy read, and I was excited about it anyway, so I blew through it really fast with no problem, except for this one bit in the genetics chapter. Tychonievich uses an extended metaphor about cookies and cookie recipes, which was initially clear, but then after a few paragraphs I started thinking about how hungry I was, and by the time the metaphor came back around again, I was too distracted to follow. Re-reading cleared things up. This section stands out mostly because it's the only part of the book that wasn't pretty immediately clear, and it's an important, if small, section of the book.

If those two things are my biggest complaints about the book -- and they are -- then obviously I still like it pretty well. I don't want to get too detailed about the specific information in the book, but I certainly learned things, and there are solutions for some plant-breeding problems that I intend to try at some point.

I've also been inspired to step up my geekery; there are way more things I could be tracking that just the date I started the seeds and the seed parent. I predict an explosion of spreadsheets in my near future. (Leaf size! New leaf color! Leaf shape! Overall size! Amount of branching/suckering!)

Probably also an explosion of new seedlings, too. I'm looking forward to it.

You can buy Plant Breeding for the Home Gardener directly from Timber Press, from Amazon, or Barnes and Noble.

Joseph Tychonievich's also writes the blog for Arrowhead Alpines, which you should have been following already but I'll let it slide just this once.


1 (Unless you count coleus, which you really shouldn't.)
2 (Iris and Canna)
3 (Anthurium and Schlumbergera.) There are no cacti mentioned at all, and only one mention of an aroid -- Arisaema triphyllum, or Jack in the pulpit -- which is only a single sentence about the flower structure.
4 Not that there aren't still plenty of plants covered. And a lot of the information is general enough to apply to plants not specifically discussed. The plants that get the most page space are: columbines, coleus, daffodils, Dianthus (the whole genus), hollyhocks, roses, snapdragons, zinnias, beans, cabbage/broccoli/cauliflower/etc., corn, lettuce, squash, and tomatoes, but violets, petunias, radishes, daylilies, and assorted other things make appearances as well.
5 For new readers, who might not be aware: I have been giving the Anthurium seedlings the names of drag queens (and roller girls/guys), both real and imaginary, because it amuses me to do so and they're mine so you can't stop me. These are not necessarily the names I'd give them if they were actual patented cultivars. Though they're not necessarily not the names I'd give them either.
I haven't named the Schlumbergeras, though I'm open to suggestions if someone wants to throw out an idea.
Posted by mr_subjunctive at 3:00 AM

Thanks for the review, and glad you enjoyed it despite the lack of house plants. And they didn't send you a copy? I'm going to go write an angry email.

I'm so glad to finally have read a review of Joseph's book! Not being much of a plant breeder myself I wasn't really planning to purchase (or to receive a review copy from Timber) but I am happy to know someone with your refined sensibilities finds it worthy.

Obviously he needs to keep something back for the sequel. Unfortunately I hate buying off the net and this is not going to be in a UK bookstore for a while. I really want to breed a few new plants. Particularly asclepiads though and they are a bit special, like orchids.

How about TV performers who have done bearable Christmas specials for the names of Christmas cacti?

I really doubt that there are at least 115 of those, though. I'd be hard pressed to think of three.

Hmmm...pro athletes of some sort? Dog breeds? Board Games? Cereals?

I wasn't sure about reading the book either, since I'm not exactly interested in the subject matter. Now, you've made me think I should read it, and I really like Joseph, so I should. I would really run to buy it, if it had houseplants in it also.
By the way, you really should meet Joseph someday. He is a wonderful guy!

Great review! I'm going to have to check it out and dream of having a vegetable garden someday.