The 2013 orchid show was smaller than previous years, it seemed like, and a larger percentage of the orchids they had were in roped-off displays. Not the worst thing in the world, but inconvenient for taking photos, since most of the plants they had were too far away for me to photograph. 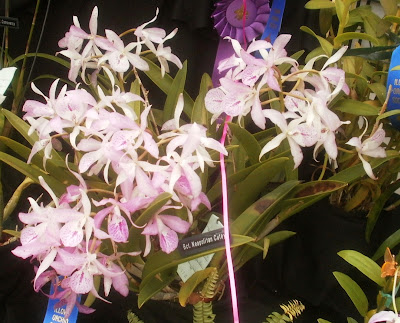 So at one point I asked a lady sitting behind a table, who seemed official (though I'm not sure who she was or what she was doing), whether stepping inside the ropes to get photos was completely forbidden, or merely frowned upon, or totally okay. I only sort of got an answer. It was something along the lines of, well, it's basically forbidden, but if you get in and out quick and don't fall on the plants, I won't tell on you. *wink*

Which I took to mean that it was probably okay, but only as long as nothing bad happened. And what are the odds of that? And it wasn't like there weren't plenty of plants around that were accessible enough to get pictures of anyway. I mean, it wasn't like there were any in the roped-off area that I was just dying to get a photo of. So this is the first of a few pictures during the next year that were taken from a distance, with a shaky camera, because I didn't trust myself not to fall into the display and crush everything if I got closer. Which in retrospect is pretty silly, since she was basically saying to go ahead, but oh well.

Brassocatanthe Neapolitan Cutey is Brassocattleya Hoku Gem x Brassanthe Maikai; it takes after the latter a lot more than it does the former, apparently, which is too bad, 'cause Hoku Gem is pretty.

An understandable precaution on their part -- having helped sell orchids at quite a few shows over the years, I have seen the damage people can do time and time again. Women tend to be the most "dangerous" ... as their purses smack into flowers (either at the vendor tables or at the displays) buds get knocked off or beaten up, flower spikes get broken off, and sometime entire plants take a header. (Not meaning to offend women at large, but too many do not pay attention to where their purse is swinging or what it is swinging into.) Men don't tend to be quite as bad in the damage department, but only because they, in most cases, aren't swinging a "bag of destruction" (purse). At one show I remember an incident with some women who didn't feel the "do not enter display" sign applied to them. As one of them got into the display (with her luggage-size purse of course) and crouched down among the flowers for her picture to be taken, a couple plants had flowers knocked off and several had flowers smooshed (and noticeably bruised/beat-up) as a result. She was oblivious to the damage she had caused and was miffed/offended when one of the folks working the show told her to get out of the display.

I will admit that I have occasionally stepped into a display to get a better shot, but that is after removing any jacket/coat, tucking in any baggy/loose clothing, and removing my camera bag. Even then, I'm paranoid as all get-out about not brushing up against any plants.

I agree with Paul that they need to take preventive measures, since there are too many people who flock in such exhibitions and not every body is cautious enough to avoid the collision course.

But the flip side is that, that we can not photograph our favorite orchids and save them for posterity.

I think women, who was probably an official, took a little risk by allowing you to go inside ropes for a clear view, though kudos to you for being sensitive enough not to harm the plants. If you have would have entered inside ropes then who knows, probably many people had follow suit and one of them might have accidentally or carelessly collided with one of the plants and damaged it.