Four Questions for the Hive Mind

Question 1: Is it possible for fuzzy-leaved plants like Episcias to get scale?

I've seen warnings about mealybugs on Episcia, and actual mealybugs on similarly-fuzzy plants, but I don't think I've ever seen anyone talk about scale on Episcia, Saintpaulia, etc. Does it happen? It seems like maybe the hairs would make it hard for them to sit on the stems and leaves like they like to, and I haven't seen any during the whole scale outbreak, is mostly why I'm asking.


Question 2: What was happening here? 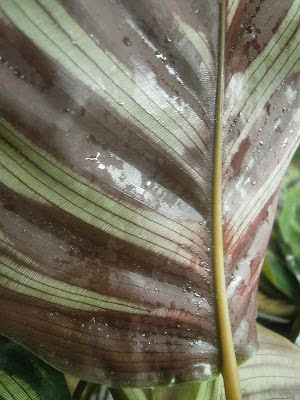 The Calathea makoyana had been doing fine for quite a while down in the basement. Then, about a month ago, I had it switch places with an Aglaonema next to it, because the Aglaonema was getting too tall. The Calathea then wound up directly under one of the shop lights. Two weeks later, when I went to water it, the leaves were curled and beginning to wilt, and the undersides of most of the leaves were full of spider mites and sticky spots like this. Thinking "sticky spots = scale," I checked the plant thoroughly, but didn't find any. So I put it back, in its old spot. Two weeks later, I looked at it again, and it looked like the above photo. Still didn't see any actual insects, just spider mites. And unlike the scale on the other side of the basement, the stickiness was only ever on the underside of the leaves, never the top.

The plant was discarded anyway, on the grounds that several of its neighbors had detectable scale infestations, and that was long enough ago that I'm not upset about it now. But I am still wondering how I could have gotten scale without, as far as I can tell, getting scale.


Question 3: How do you keep potted plants upright when outdoors?

I intend to let some of the plants spend the summer outdoors again. The logical place for them to go is along the north side of the garage, which is shaded for most of the day but gets weak sun in the afternoon. Also the husband just poured concrete there, so it's a nice flat surface.

The problem is that the wind comes sweeping in from the west, with basically nothing to block it, and gets funneled between the garage and house, so by the time it reaches the driveway it's moving really fast. Consequently, anything with a high center of gravity gets knocked over every time we have a storm. And we have lots of storms.

Last summer, I had three basic approaches for dealing with this. 1) Put the pots really close together, so even if they catch the wind and want to blow over, they can't. 2) Put bricks on the rim and/or soil. 3) Keep the really top-heavy plants inside. Those kind of worked, but even so, I spent a lot of time righting pots, dashing out into the rain at 4 AM to rush a cart full of plants into the garage, and picking up shards of broken pots.

So I'm hoping that there are better ways that I haven't thought of yet. There is a plantable bed next to this spot, so it might theoretically be possible to plant something cheap or fast-growing to serve as a windbreak (currently, all that's there is grape hyacinth, Muscari something, so there's room), but all we actually have right now are a ton of Cannas and a random bunch of two- or three-year-old seeds.


Question 4: Are there ways to force Agaves to offset? Or even ways to encourage them to offset? 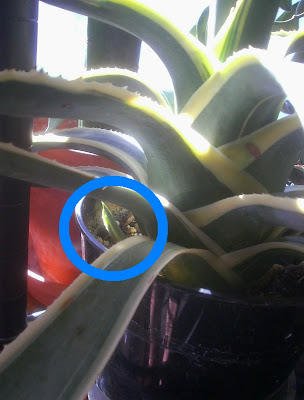 I ask because there was a spell in January when a bunch of Agaves I had all started to offset at once. It could be coincidence, of course, but a couple of the offsetters in January had never even done it before, so it seemed like there was a connection. If I did something to cause it, though, I don't know what that was. Does anybody have any idea how that works?

#1. Good question. Eucodonias, achimenes and their hybrids aren't prone to having insect damage or infestations of any kind in my experience. They have other issues, but don't seem attractive to the bugs. I'd think your examples would be similar.
#2. Hard to tell, but in the photo it looks like aphid damage, but you'd have seen those.
#3. You don't unless the pot has enough weight underneath the plant. You find that out by having to pick up broken pot shards and being forced to repot something with damaged foliage after it has blown over and rolled and generally mangled from the event.
#4. Isn't it a combo of day length, temperature and plant maturity of some sort? Similar things I grow tend to start the process in late winter in time for the offsets to be actively growing during the spring. A sort of plant intelligence.

Q.4. Whenever you want a plant to branch, cut off the primary shoot which removes the apical dominance. The bad bunnies have done this for me with agave, so it works.

I was sort of hoping for something a little less, you know, disfiguring.

Jane in the midwest said...

The calathea damage you see is classic spider mite damage. If you look closely at mite damage, you will see sap seeping out of the leaf in separate, super tiny drops...this is where the mites have bitten through the leaf and sucked out the juice. As more bites are made, the tiny spots of sap will become bigger pools as they join together. This kind of damage is most visible on plants with large, smooth, flat leaves. Spider mites are the only insect I've dealt with, but let me tell you my battle with them has been EPIC. I am very certain this is what is going on with your calathea.

Is there the light spot dimpling effect on the other side of the Calathea leaf? I've never encountered spider mite damage without that occurring.

Other tidbit I thought you might find interesting - I bought a Senecio radacans last summer which had scale. I didn't really do anything to treat it since it was outside and not near anything, but it has been wintering over in a copper hanging pot in my laundry room and there is no more detectable scale! I am wondering if the copper has some sort of weird pH/acidic/etc. effect on the plant which makes it unfriendly to scale? Whatever the case, I am pretty happy about it.


Q#1 To the best of my knowledge, no, scale is not an issue for such.

Q#2 Sap sucking arthropods is likely. A further issue, of which I have no doubt you already know, is the possibility of sooty mold/fungus proliferating on the sugar-rich leaked sap.

Q#3 All of the methods you have used. In addition -- depending upon the size of the plant -- hanging said plant in a tree if you don't mind swinging obstacles. Then there is the use of twist ties (the plastic coated ones that come on a spool so you can make them as long as you wish) and tying/bracing the plant(s) to a sturdy trellis or similar structure. And finally, those plastic pot trays that shipments of plants come in. A number of plants can be placed in said tray (as always depending upon the size of pot and spread of the plants) such that they are less likely to tip and together they help weight the tray down. Oh, there is also the option of placing potted plants in a sturdy "high" walled trough/planter (one with drainage holes, of course).

Q#4 Other than Phyto's drastic suggestion, none that I know of. Agaves pup when and if they feel like it. Some are very prolific puppers, others rarely pup unless the mother plant has finished its lifecycle and is dying, and then some still only pup sparsely.
------------------------------
Anon, with regards to your Senecio, it is quite possible that during its summering outdoors the natural scale predators did the scale in.

#3 We built a sort of "flowerbed" for potted plants. It's basically a large rectangle made of wood planks. Put in the pots, fill the gaps in between with gravel and voila. Downside is that it is a pain in the ass to move so only works if you plan to make it a permanent installment to your garden.