This year, I was avoiding the sale tables, because . . . I dunno. It feels weird to take photos, especially if I'm taking photos without buying anything. Also they're only tagged sometimes, which is obnoxious, and there are usually a few people standing across the table from me when I take the pictures, and even if they don't say anything or aren't paying any attention to me, it still feels awkward. But I made an exception for this one because 1) it was tagged, and 2) it was unusual. 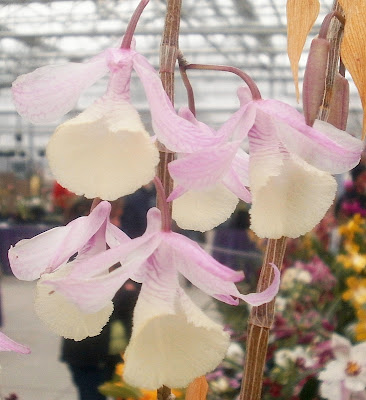 Of course, it also sort of reminds me of the Exotic Angel logo. And the lighting was crappy. But whatever. I tried. 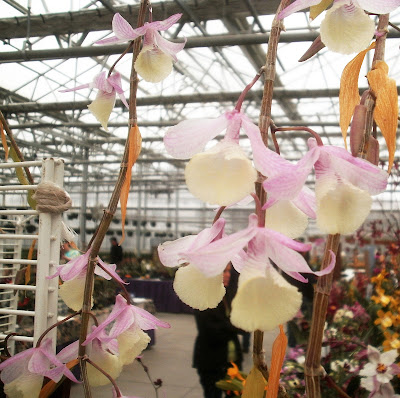 The price was $20, which I suppose is probably not bad, for a species orchid. (I don't have much to compare to, though. Is it?)

They sound difficult to grow, though. Being an orchid would be damning enough, but then on top of that, they have a pronounced dormancy from early winter to mid-spring. Plants with dormant periods make me nervous. On top of that, they're apparently one of those plants that's super-touchy about getting too much water (it'll abort the flowers), but also can't get by with no water at all. (The canes shrivel; I couldn't determine whether going completely without water will actually kill them.)

But they're interesting, and the floral displays get a lot bigger than this. I found a good blog post on "pendant" Dendrobiums here, which is highly recommended, if only for the photos. The D. pierardii photo must have at least 200 individual flowers visible. And D. wardianum has some fine-looking flowers as well.

Never ceases to surprise me how many nameless plants you find at the shows in your area. Such things are a rarity at the shows I attend.

Personally I find orchids easier than many plants.

The watering for dens like that isn't a big problem. For most folks finding a cool/chilly bright location for it during dormancy is usually the issue. Typically during den dormancy, withhold water except for occasional misting of the roots (like once every few weeks). If the canes start to shrivel, then mist a bit more often.

It's probably a good price from what I've seen. A beautiful variety for sure!