Three or four weeks ago, I was talking to my Dad on the phone, and he mentioned that the Irises where he and Mom live (fairly close, south of us) had buds on them already, and that they were sufficiently developed that you could tell what color the flowers were going to be.

We didn't have any Iris buds at that point, but about a week after that conversation, I saw a couple stalks were forming.

Whew. What a relief. They're going to bloom after all. Iris NOID blue-violet, 2013.
And then it was over. Two flower stalks, with three or four flowers apiece, both from the NOID blue variety. Nothing from 'Shelly Elizabeth.' The end.

I had been anticipating, you know, more, so I looked for information on-line about non-blooming Irises, and came up with this page at Garden Web, which lists several thousand possible reasons why Iris might decline to bloom, few of which seem to apply in my particular case: 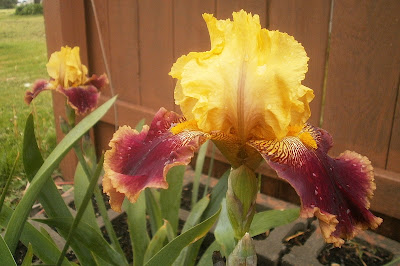 Iris 'Shelly Elizabeth,' 2012.
Inadequate sun -- again, it was enough last year, so it couldn't be that they're planted in a part of the yard that doesn't get enough sun. However, it's plausible that the town in general didn't get enough sun this year; the state of Iowa has had its wettest spring in 141 years of recorded history this spring. We even have mushrooms growing all over the yard: 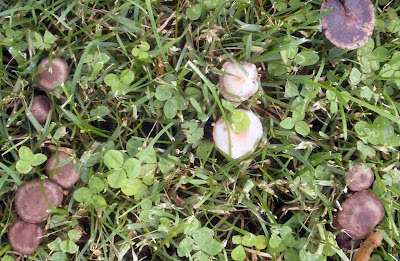 A representative sample of the back yard. Seriously, it's all like this.
So it's probably been unusually cloudy, too. Neither the husband nor I recall seeing a normal number of Irises around town, but it's not really something we have a great sense of in the first place, and we didn't know it was going to be important to keep track, so that doesn't necessarily mean anything.

Nutrient deficiencies -- doubtful; this is only the second year they've been growing in this spot, and the soil contains a lot of compost.

Inappropriate watering -- see above re: wettest spring in 141 years. Though last summer was a significant drought, too, with the lawn cracking and stuff, so if blooms are strongly related to watering from the previous summer and fall, maybe.

Planted too deeply -- don't think the planting depth has changed since last year; we certainly haven't added any soil. They did have some oak and maple leaves on them during the winter, because leaves just accumulate there. I don't recall making a point of removing them (though the husband might have), so this is sort of plausible, depending on how much mulch counts as deep planting.

Overcrowding -- I have no reference points for how close Iris rhizomes should be, so you tell me: 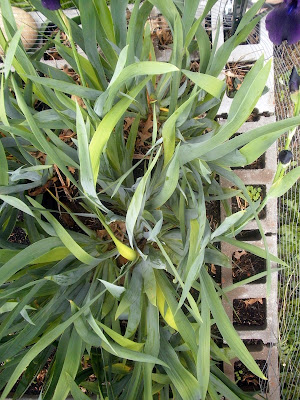 It should probably be noted that the more isolated rhizomes aren't blooming either (though they could still be a little crowded, just not so much by one another): 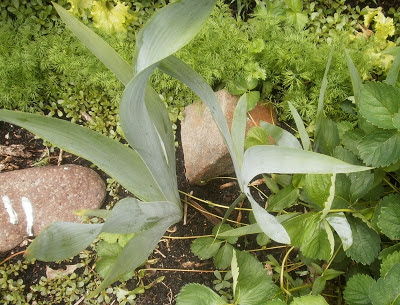 Weeds -- not among the Irises; there's no room. Everywhere else, sure.

Ill health -- doubtful. If anything, it seems like there are more and bigger leaves this year than previously. True, lots of them are also weirdly sickle-shaped, but they don't seem ill.

Late freezes -- I couldn't tell you for sure. We did have some temperatures near-freezing in early May, but I don't think we were forecast to have an actual freeze. And I'm not sure about earlier than that. Could this cause the sickle-shaped leaves?

Irregular bloomer -- I wouldn't necessarily know, I suppose. They bloomed last year. Didn't in 2011 (though they sort of tried). Freshly-divided and immature in 2010.

So . . . is anything jumping out at anybody as being the obvious problem? (Ideally something that's easily fixed?)

Well, dang! I don't have anything to offer except sympathy and empathy -- many of mine didn't bloom all that well this year either.

It might, repeat, might be overcrowding. in my climate, we thin every two years to get the best blooms. One of two months after they bloom, the new ' fans' of leaves are sprouting, these are divided and replanted. Old fans that have bloomed won't bloom again, sho they're discarded, or possibly planted somewhere where they can produce more pups. the new plants should be established well enough to bloom by next year.

I'm not familiar with Shelly Elizabeth, but tall bearded iris, like most plants, can be strange people. Some have weedy growth but are stingy with their blooms, some have a tendency to behave like annuals and bloom without increase and are gone, etc. Some are just divas and hard to please so refuse get on the stage and perform because they are just being peevish. You can't rule out that it's just the genetics causing the behavior, but hard to determine. I doubt you did it, but too much high nitrogen fertilizer is credited with causing healthy fan growth at the expense of blooms. The leaves you describe might be an indication of too much nitrogen. Are they wide and fast growing? If that's the case, the plant will soon use up the extra and will probably bloom next year. Sometimes it's hard to know exactly why iris behave differently from another one planted next to it. From what I can see in the photo, I don't think they are too crowded to prevent bloom. The 2' spacing of a new planting is to give them room and it's usually 3-5 years before they usually need dug and thinned and replanted depending on how well they've grown.

As you are already well aware, there are any number of conditions that alone or in conjunction with others may have resulted in a poor performance this year. I wouldn't be the least bit surprised if your drought last year was not at least in part to blame. You are quite correct that like other spring bloomers, irises rely heavily on the resources accrued from the summer prior for bloom production the following spring.

the top surface of the rhizome should be exposed. sometimes mine start to get buried from mulch and don't bloom. when i uncover them they bloom the following season.

I'm having the same kind of problem with my iris - very few blooms. I think mine need more sun, so I've moved some of them. It will be next year before I know if it helps.
Have a wonderful day!
Lea
Lea's Menagerie