Apology to a Potter Wasp 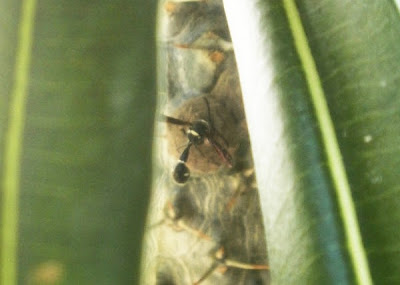 I wish to apologize to you for my actions on 10 July 2013, when I thoughtlessly destroyed the two nests you had constructed on my Pachypodium lamerei and then smeared the caterpillars that were inside across the concrete. I should not have done either of those things. 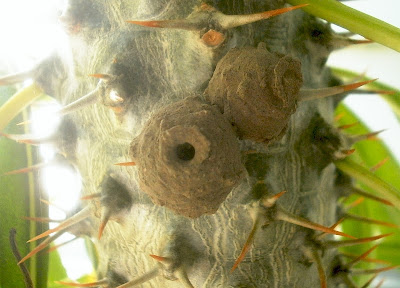 The brood cells; the one on the left is still being filled; the one on the right is full and has been capped.
I did not intend to inconvenience you; I was merely unfamiliar with your brood cells, and on first glance, feared that they were a gall or other pathogenic growth on my plant. And also I was a bit creeped out by the caterpillars, since to me they're a threat, not baby food. 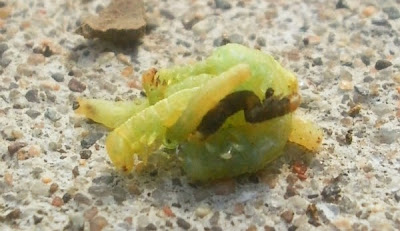 The caterpillars from the cell that had already been filled. She crammed them in there pretty tightly. Proportionally, that's something like you or I filling a Ford Focus, unassisted, through the driver's side window, with paralyzed German shepherds.
I know that the nests represented a significant investment of effort on your part, in the construction of the chambers themselves, the hunting, stinging, transporting, and shoving of the caterpillars, and the egg laid in the closed nest. Further, I acknowledge that no apology can make up for this loss. Nevertheless, I wished to express my sincere regret, and promise that if you should favor my plants for construction in the future, I am now capable of recognizing your brood cells and will do my best not to harm them until your offspring have matured and emerged. 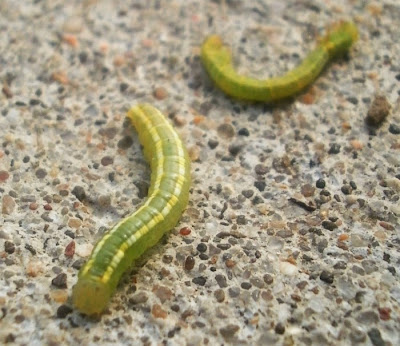 The caterpillars from the cell that was still being filled. Still alive, technically, but they weren't moving at all when this photo was taken.
I have also instructed my husband and dog not to interfere with your subsequent constructions, if any.

Please do not hesitate to contact me if I may be of assistance (mud, location recommendations, caterpillar scouting) to you in the future.

Alas, a truly unfortunate series of events. Had I been able to, I would have informed you of her habits. The mud dauber wasps are quite the industrious bunch of gals.

Fascinating. I just read this evening that the 'blue' dirt dauber feeds her brood with Black Widow Spiders.