The seedlings are still around, mostly -- I started 56, of which approximately 42 (75%) germinated, and 39 of which (70%) are still around, though some of those aren't looking real promising. I should probably try to figure out a way to move them outside for a couple months; I'm just not sure where I could put them.

But that's not what this post is about (ha! Tricked you!); what the post is about is the first specimen of L. principis I bought, which is producing flower buds! 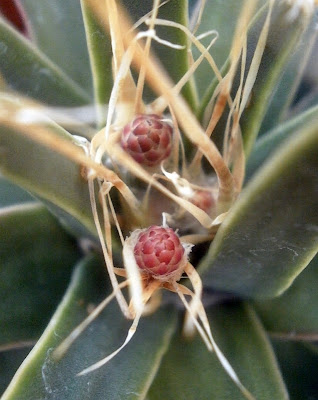 Leuchtenbergia principis is actually supposed to be a relatively easy cactus to bring into bloom, so this may not excite some of you all that much, but it's a big deal to me. This plant had a flower on it when I bought it in 2009, but hadn't bloomed for me since. They need quite a bit of light to bloom, and I'd been keeping it indoors year-round, therefore no flowers.

The buds don't appear to be developing very rapidly, so I don't know how long it's going to take before I see the actual blooms, but it's something to watch for and something to look forward to. The longer the plant collection lasts, the rarer it is for the plants to do anything I haven't seen them do before (and often when they do bother to do a new thing, it's dying), so stuff like this is even more exciting to me than it would have been a few years back.

Have you since moved the plant outside? (Wondering if that spurred the development of buds. If you have not moved it outside yet, doing so might very well speed along the bud development. I suspect that the cooler indoor temps (if it is still indoors) may greatly slow down the developing buds.

Yeah, it's been outside since Aprilish (not counting freezes).

Since the photo in the post was taken, a fourth bud has appeared: it looks like it's been waiting a long time to do this and is trying to get a few years of frustration out all at once.