I'm unclear on the specifics of where and how, but the husband, knowing that I've been looking for a microscope for some time, somehow obtained a used one for me. Which is one example of how he's the best husband ever.

1) Okay, I don't know the proper names for anything here, but I'm going to call that thing in the middle, with the four things sticking out from it, the microscope's "udder," because that's what it looks like. Each of those barrels on the udder has a different level of magnification (I don't know what levels of magnification, because I cannot decipher what the barrels say), only two of which appear to function.
2) It's a regular, old-school, 1960s-ish microscope, so it wasn't designed with digital photography in mind. If the camera lens is not exactly centered over the eyepiece, the camera doesn't register anything being there at all. Likewise if it isn't precisely the right height above the eyepiece. My hands shake way too much to get pictures by holding the camera in the right spot myself, and although we do have a tripod, the base of the microscope is just large enough to get in the way of the tripod's legs, so I can get within about a centimeter (0.4 in.) of the eyepiece, but then no further. Except! When I took the below pictures, I actually could get the tripod directly over the eyepiece. I just couldn't do it again a few days later when I moved the whole thing outside to try to get a better set of pictures in stronger light, and I don't know why, and the whole thing was very frustrating. Which leads us to the third problem, which is:
3) Even when I do manage to line the camera up, using the tripod, the amount of light coming through the eyepiece is small, so my camera uses long exposure times, which results in blurry pictures, even at its best.
4) And at its worst, the camera autofocus chooses to focus on the eyepiece itself, instead of the image in the eyepiece. Or it focuses on some part of the microscope outside the eyepiece, so I get a perfect shot of the top of the udder but the actual image I'm trying to capture is too fuzzy to make out.

So the point is that there are some problems with this, and you should, consequently, not expect to see a lot of these pictures until such time as I can figure out how to get better ones. And I would love some suggestions from other people, because I know there's got to be someone out there who's taken photographs through a microscope's eyepiece successfully.

Having said all of that, there have been some pretty cool moments with the microscope already, which I will hopefully be able to share with you someday. Portulaca grandiflora seeds, my only successful photos to date, turn out to be much more interesting than the gray, metallic dust they appear to be with the naked eye. For example, I had always imagined them as more or less spherical, since a lot of seeds are, but they turn out to have a specific, weird shape, somewhere between a comma and a nautilus: 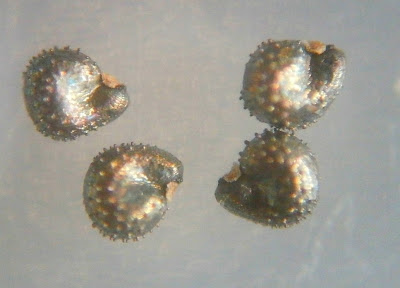 At the higher magnification, they also have an unexpected texture, which is probably the coolest and most surprising thing I've seen in weeks. It didn't photograph well, of course: 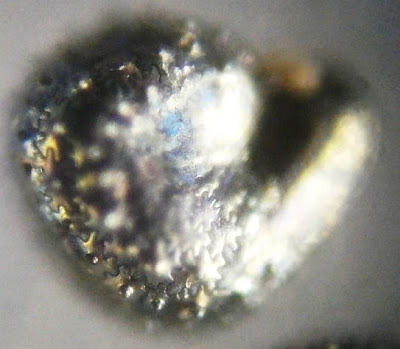 The pattern is sort of approximately that of a bunch of tiny interlocked cogwheels, covering the whole surface of the seed. Which is even stranger in combination with the overall iridescent metallic gray color. (I now suspect that Portulaca grandiflora are robotic plants.)

I also tried for photos of the pollen, but that went even less well, and wasn't very interesting: 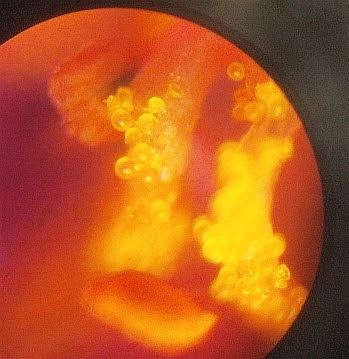 And those are the only actual pictures I'm able to provide to you at this point. Possible coming attractions, if I can figure out how to take the pictures:

A lot of leaves are hairier than I would have guessed. (Pedilanthus being the most surprising.) Though most leaves are disappointingly boring.

The serrated edges on Yucca guatemalensis are a lot less regular in shape and spacing than I expected.

Ceropegia woodii flowers look exactly the way you would expect them to look, and brought to mind both "eyelashes" and "houseflies." Aeschynanthus speciosus flowers are boring and look just like they do with the naked eye, except bigger. Neofinetia roots didn't do much for me. (Think "styrofoam.") The Euphorbia fungus (yes, I still have Euphorbia fungus) looked exactly like I expected (sort of a creeping white net), and was dull.

Broadleaf plantain (Plantago major) really does have flowers (when you let it bloom), and the flowers are actually sort of pretty. I mean, if they were twenty times bigger, you'd grow the plant as an ornamental: there's a white, fluffy bottlebrush sort of stamen, with lots of white spherical pollen grains, and then the stigmas, or something I take to be the stigmas, are sort of shaped like white tulips with purple stripes down the center of each petal. (Plantago major is high on the list of stuff to get pictures of, whenever I figure out how to do that, but you can get some idea from the picture here at Wikimedia Commons. There must be some natural variation, though, because that's a darker, solid purple than what I was seeing.)

Another high-priority item: Anthurium spadices. It's a little easier for me to believe that those are flowers, now that I've seen them close-up. (I'd link to a photo, but I couldn't find one easily on Google image search.) It should probably be noted that they're still not pretty. At best, interesting.

Spider mites are every bit as horrifying as you'd think they would be, and they will continue to suck sap out of a leaf even after it's been removed from the plant. They also do this weird thing where they either shake their back legs like a dog getting a belly rub, or they rub their rearmost pair of legs together like a person trying to warm their hands. I only saw it do that once, and it was fast. I was so surprised and freaked out by there being, suddenly, movement, that I can't tell you exactly what it was. It also convinced me to throw the leaf in the trash more or less immediately afterward.

I think I've seen spider mite eggs now, though they weren't all the same color, so I'm not 100% on that. (They were all somewhere in the yellow or yellow-orange color range, but the darkness varied a lot, from pale yellow down to almost black.)

Some unknown white thing that was on our lettuce was one of the scariest things I've ever seen. It somehow managed to evoke deep-sea crabs, skeletons, spiders, and ghosts simultaneously, and I'm pretty sure seeing them come into focus in the microscope took a year off my life. The best match I found on-line for them was here, on a forum where they were identified as the shed exoskeletons of a molted aphid here. (The pictures at the link aren't magnified enough to be upsetting, FWIW.) So "skeleton" and "ghost" were actually pretty close. That also explains why they weren't moving.

So the point is, there's a lot of potential for interesting new posts, if only I can figure out how to get the pictures. It's going to take some experimentation, and I only have so much time, so if anybody has any relevant expertise, I'd sure appreciate hearing from you.

And yeah, they look like an udder to me too, I thought that was only me.

I don't have the expertise but I can suggest a place to start looking for information. Alex Wild (www.alexanderwild.com) is an insect photographer. He does very high quality work but occasionally he does a blog post on cheap macrophotography. There should be some way to jerry rig a camera mount and he may have posted about it. Good luck!

I've gotten some surprisingly good microscope photographs using my iphone. If you hold the camera lens up to the eyepiece just right, it should focus fine and give you a good picture. Granted, it takes patience and quite a bit of finesse. I recommend using both hands and bracing them with a couple fingers against the microscope itself.