I'd thought maybe, but it looks like I don't get a repeat of the Clivia flowers this year. Ah, well.

The seedlings are doing all kinds of different things. Some just sit there. Some get periodically covered with a white fungus. Some have leaves. I started the first batch in a glass jar: I put in soil and some water, microwaved it to heat and sterilize the soil (which apparently didn't work, since the fungus keeps appearing), then allowed it to cool down. I then removed the seed coats from the seeds, rinsed them in a dilute solution of hydrogen peroxide, and dropped them in. 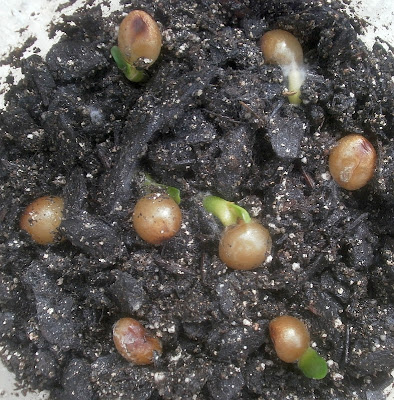 The top-down angle isn't ideal for seeing how much growth there's been, but it's a bit clearer than shooting through the side of the jar. . . . 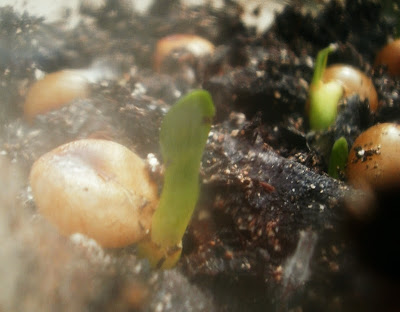 The second batch, I just removed the seed coat and dropped them into small pots of wet soil. Only one of that group has done anything -- 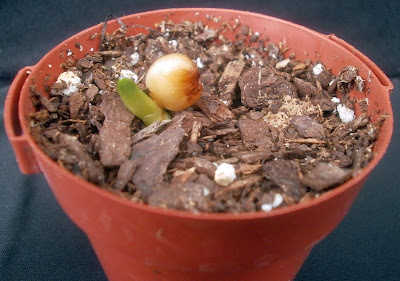 -- and I'm afraid that taking the photo may have set it back, since I brought it outside for the picture, along with a bunch of other plants in a box. On the way back into the house, one of them started to tip over, so I shifted the box, so then others started to tip, and in short order I had dumped them all out onto the ground. The Clivia seedling appeared unharmed, but it did get knocked completely out of its pot, so I'm worried anyway. (Clivia roots are pretty sturdy, though, right?)

But the point remains that there don't seem to be any appreciable differences between the two groups, in terms of survival or progress, so perhaps the microwaving and peroxide and all that was overkill. Time will tell.

Out of curiosity, what did you think of the seeds' physical appearance? I recall finding the seeds I had been given by a friend of mine (years and years ago) to be quite intriguing -- they were surprisingly translucent.

I agree that they're neat. For some reason (shape and size?) they reminded me of macadamia nuts, though obviously macadmia nuts taste better and Clivia seeds are prettier.

Forgive if you already know this, but if the seedlings show basal pigmentation, they will likely be orange, whereas none at all suggests yellow flowers will result.

They are absolutely adorable! I feel like chucking them under the chin and saying "Coochie coochie coo!"