So a month ago, when I posted pictures of a frog I happened to see in the Ananas comosus 'Mongo,' I said I thought the frog in question was only passing through, since it wasn't there the following day. Since then, I've seen some identical-looking frogs hanging around the yard, on a few occasions, so maybe we do have a permanent resident.

Mostly I've seen them (or him, or her) when I had to move plants in and out a lot, due to cooler weather. Went to pick up one of the big Euphorbia trigonas and was met with this, right at eye level: 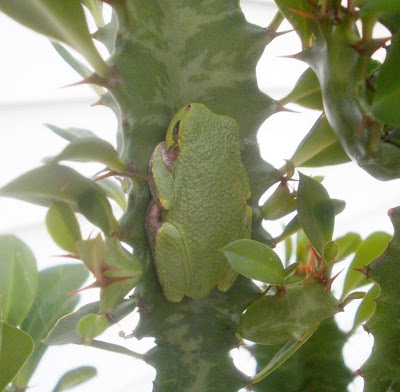 Good job on the camouflage, there, buddy. (The color match actually was pretty impressive in person.) I picked up the frog and put it in the marigolds, and continued moving plants inside, and then some minutes later ran into it again on a different plant: it seemed to be slowly making its way toward the house. And then the following night, it was on the cactus cart, right next to the house, and I caught it and relocated it.

A few nights later, I realized why it kept trying to get to the house: I saw it sitting on one of the basement windows, in the process of chewing up a moth it had just caught. The husband had seen it at the same window on other occasions, so apparently it migrates to the basement window every night to feed itself, sleeps in the plants when our lights go out, then gets up in the morning and does its frog business, whatever that is, until it's time to head back to the window. So I'm not seeing it in the same places, but it probably is the same frog.

It's also not necessarily just one frog. One day in the last month, I saw a frog among my houseplants, and then a short time later saw one sitting on a Canna, across the yard: 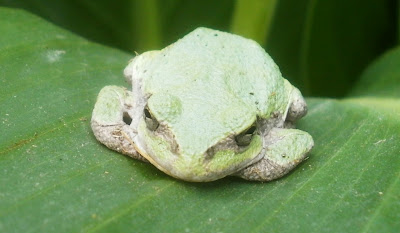 A determined frog could probably have crossed the yard and climbed the Canna between sightings, but I'm guessing they were different ones. So we possibly have a whole frog resort area going on. Certainly sounded like it, earlier this summer.

It certainly does look like you've got a frog resort. They obviously like what your yard has to offer. I wish some frogs would move into my backyard, too. I keep hoping I'll stumble across one at some point, but no luck so far.

I just moved from Louisiana to Kansas, and my patio wildlife has changed from anoles, frogs, toads, dragonflies, wasps, and slugs to (from a couple weeks' observation so far) toads, crickets, grasshoppers, wasps, cicada killer wasps, flies, and slugs.

I like the reptiles/amphibians the most, so I'm already nostalgic for LA.

Those cicada killer wasps will do a number on your lawn. I marked their holes during the day so I could go out after dark and pour a solution of 1/2 ammonia and 1/2 water down their holes to encourage them to mess up someone else's yard.

I am also jealous :)

Also, this post just gave me the needed cuteness overdose amount for the day. Frogs are my favourite animals, they were ever since I know what animals are. Probably even from before that. I don't remember how it started :D