I got this plant from a reader (who can choose to reveal him/rself in the comments if s/he wants to), in the form of tubers that were just beginning to break dormancy, and it's been a very up-and-down kind of emotional experience thus far.

It grew fine throughout the early summer, and produced its first bloom in mid-August. 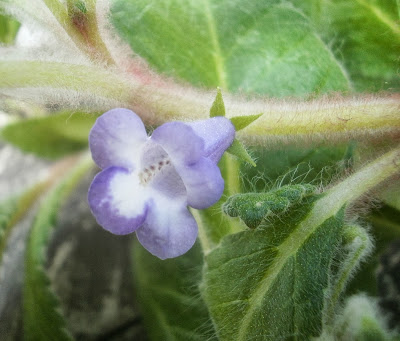 (17 August.)
Which was nice. And even the buds are kind of attractive. Or at least I think so. 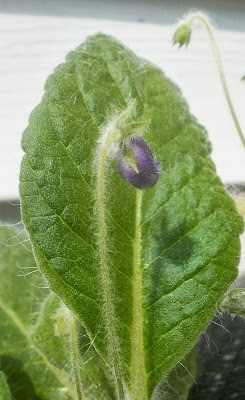 I tried to get a decent picture of the whole plant, but the lighting wasn't great, so it didn't completely work. 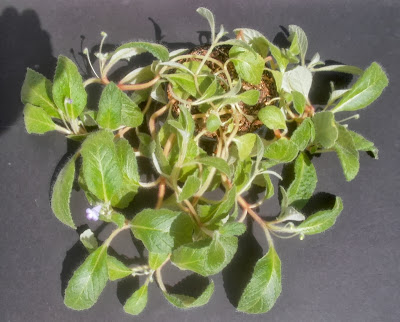 A few days after that, I had the photo-taking area set up, and tried to get a better picture of the whole plant, with partial success. Though the color was still not quite as accurate as it could have been: 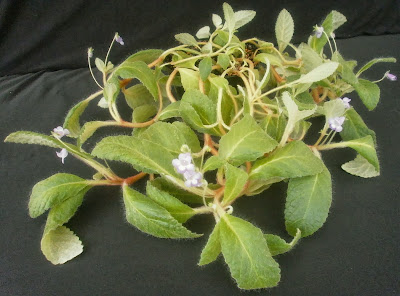 The close-up pictures were way better, though. 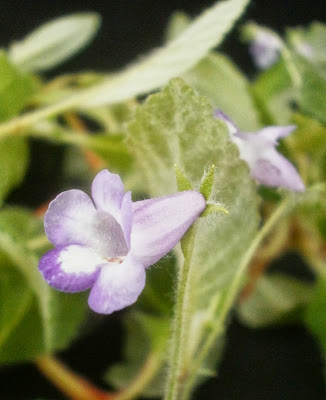 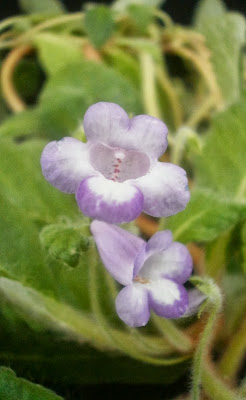 Then as I was bringing the plant back inside, I dropped the whole box of plants I was carrying (described here), and the Eucodonia got knocked out of its pot. I scooped everything back up as well as I could, but it seemed like it never fully recovered from being dropped. The problem is that for all I know, it might have peaked in late August anyway -- most of what I've read about Eucodonia on-line suggests that they do start to go dormant pretty immediately after blooming. So I don't know if it's just doing what it's supposed to do, or if I actually hurt it somehow. We'll have to wait until next year, to see what happens when it doesn't get dropped. (Assuming that I can refrain from dropping it.)

I don't have a picture, but the Amorphophallus konjac leaf has yellowed, and has almost fallen off, as of the last five days or so. I don't know if this is when that's supposed to happen or not, since I apparently didn't bother to record the event last year. I'm worrying less about the Amorphophallus these days, and the Clivias almost not at all, so apparently I can learn to be less anxious about plants that have winter dormancies, given a few years of things working the way they're supposed to. May the Eucodonia live so long.

Regarding the A. konjac, yes this is about the time for the leaf to die off and the corm to go dormant. Sono worries.

You've had a lot more experience than I. Thanks for making me feel better by voicing your doubts.

Mine is at peak bloom now, but yours started a bit earlier. I think it's done really well considering that was a single stem that got broken off by accident late in the season last year. I'm impressed. Dormancy time is approaching and by dropping it you probably triggered the onset a bit early. I've forced early dormancy on these sorts of plans more than once. I've done it experimenting to see if I could reset their clock for the following season (I still think that's possible but...) and I've done it because I was tired of taking care of them at the time and I've done it simply for my own convenience. If it were mine I'd probably start drying it up and then cut the foliage off after it's dried up, stick the whole bit in a brown paper sack and set it out of the way on a shelf or in a closet and probably not touch it again until next April late and then soak it all and let it start coming out another season. Mine put a rhizome on a yellowing stem above the soil level. That stem still has active blooms, but it's been damaged by squirrels using the container as a day bed. I've never seen a rhizome form along a stem before, but maybe I've never looked carefully enough. I would say yours has done really well. And if you have scale and such this winter, it's one you won't need to be concerned with since it will be completely asleep.

I'm glad to hear your A. konjac also is going dormant. Mine is too and I was in a panic because I hadn't read about anyone elses going dormant already. So yay, crisis averted! As for Aphelandra I've never grown it but one of my friends has one and he's absolutely smitten with it. He's not even planty so it can't be *that* hard of a plant. They just seem so...1970's to me that I've never bothered with them.