I will get back to Sheba eventually, I promise. But first: a report on the state of the local wildlife.

I usually get one hummingbird sighting every year, and that happened earlier this week. It flew away before I could adjust the camera settings, but the pictures would have been shaky blurs photographed from a distance anyway, so you're not missing much. However, I have a picture of a white-lined sphinx moth (Hyles lineata), which hovers in air sort of like a hummingbird and is therefore, to my mind, every bit as good as a hummingbird. 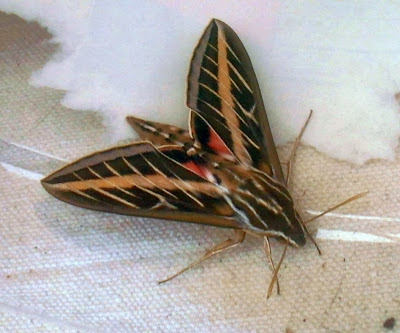 This particular individual was hiding in one of the plants on a day when I had to bring them in for the night, and then I got to chase it around the plant room, kitchen, and living room for what felt like a very long time, before I managed to catch it and take it outside. It then hung on the mouth of the container for quite a while, having exhausted itself trying to fly through windows and clear plastic walls for fifteen minutes. Which meant I got some more or less decent pictures. 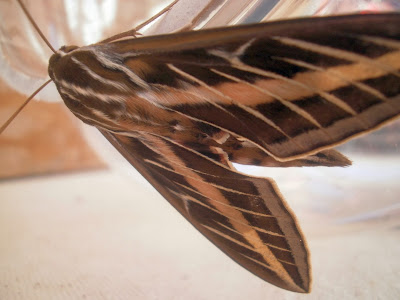 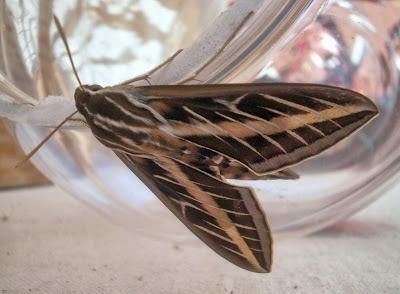 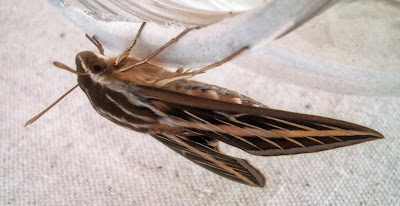 The green tree frogs (Hyla versicolor) continue to appear all over the property; 2013 is definitely the Year of the Green Tree Frog.1 There was also, briefly, a pickerel frog (Rana palustris), who lived in the Portulaca / Tagetes bed for about a week and then moved on. 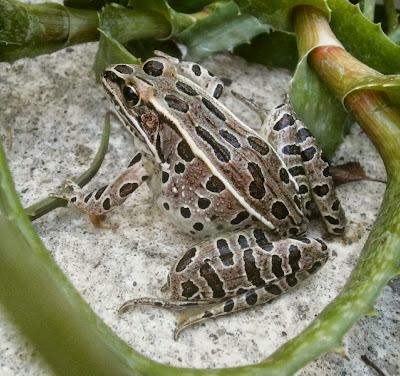 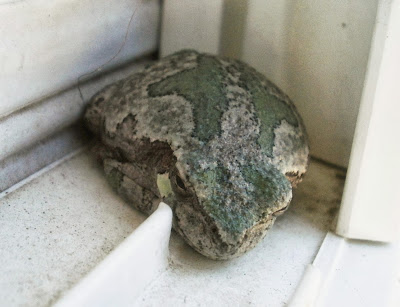 And yes, this is the same species as the solid-green frogs in the earlier posts. They can apparently choose to be solid green or gray-and-green. So that whole spiel from Kermit about how hard it is to be green: bullshit. He could just be gray, if green is so tough. What a whiner.
It's also been a good year for jumping spiders, though surprisingly light on any other spiders. Usually by this point in the year, I've seen a few black and yellow garden spiders (Argiope aurantia), but this year there's nothing. 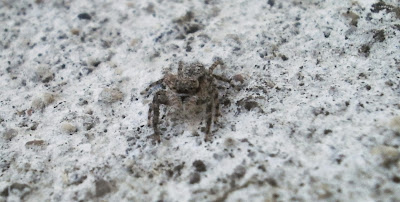 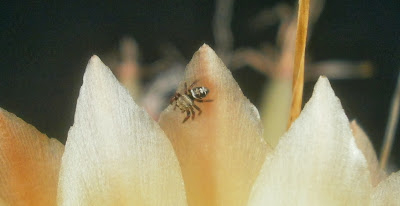 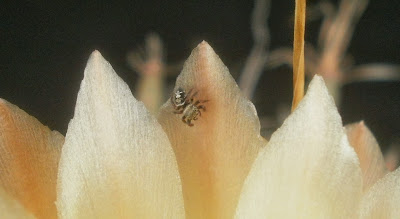 (Oh, it's over here? Okay then.) RAWWWWRRRR!

This is the most adorable spider I have ever seen. It's even better in the full-size version.
-----ARACHNOPHOBES STOP-----
I've seen a few butterflies around, though most wouldn't stay still long enough for pictures, and it hasn't been anything very interesting. Mostly blues this year. The dill we planted failed to attract any swallowtail caterpillars, and very few butterflies of any kind, which was disappointing, though it may be that the cool, wet early summer depressed the numbers of butterflies in general. 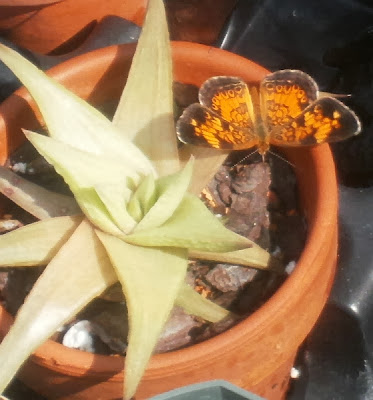 I think this is a pearl crescent butterfly (Phyciodes tharos), though there are so many small orange and brown butterflies out there that I'm not confident about it. The plant is Haworthia limifolia var. ubomboensis.
I did manage to get a couple pictures of one swallowtail, though, at the ex-job. 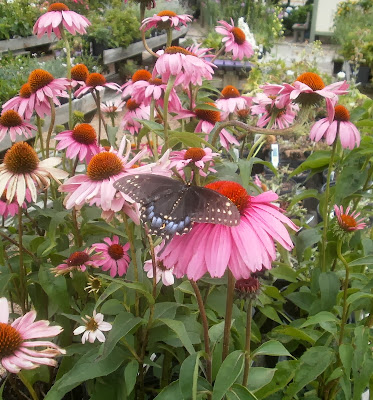 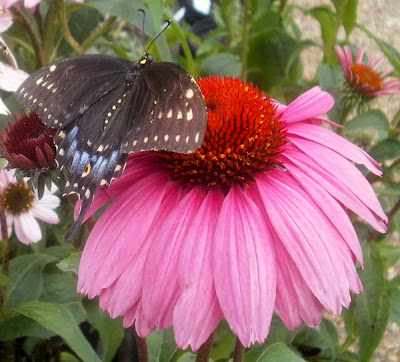 Great year for bees, though. Lately I've been seeing mostly bumblebees, but I've seen at least four different species of bee over the course of the summer, and I'm probably forgetting a few. 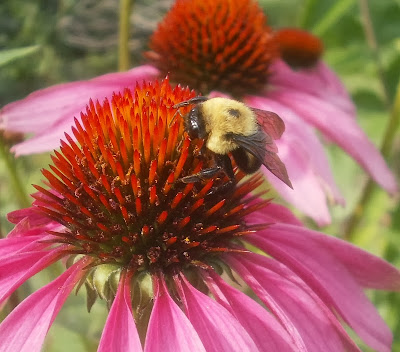 Probably the less said about caterpillars, the better, but there is one that I thought was interesting. I found it on the Portulaca in early July. 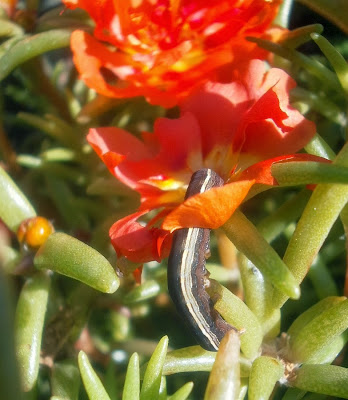 I spent a long time at What's That Bug?, looking through their butterfly and moth caterpillar archives, but didn't see many pictures that were substantially similar, and the few that were similar were for caterpillars not actually found in Iowa. So I have no idea. (I considered submitting the photos to WTB, but they sounded kind of swamped with submissions already, and it's not like this is an emergency or anything.) But it's kind of cool-looking, as caterpillars go. 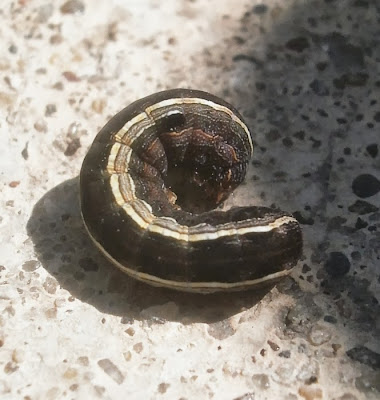 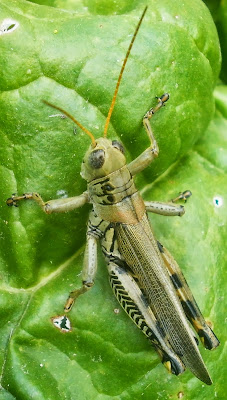 Finally, yes, there are grasshoppers (most likely the differential grasshopper, Melanoplus differentialis) around as well. They seem to be particularly fond of the Swiss chard (Beta vulgaris ssp. cicla 'Bright Lights'). Which is good, I guess. I mean, something ought to be. We tried sauteeing it with some other greens, early in the summer. It wasn't terrible, but it didn't leave us with any particular desire to do it again. So we designated it an ornamental and haven't touched it since. And it's doing a great job being ornamental.


1 Why? Well, it was an unusually wet spring, which I'd think would have to be good for frogs. There's also been some habitat disruption in the area -- some kind of pond or sewage lagoon or something got filled in. Though I don't think that was this year. I'm pretty hazy about the details.
It could be helping, too, that when the rain stopped falling in early August, we let the grass go dormant and stopped mowing. In previous years, we have watered parts of it instead. And I think we've always mowed, until this year. Which if you think about it has some implications for the frog population. (CUT TO: Miss Piggy, crying "KERMIEEEEE!!!!!!" as she sinks to her knees.)
2 To a disturbing degree: there is often a crowd of them gathered on the light fixture above our front door. As we don't use the front door very often, this hasn't been dangerous yet, but it's unsettling, like driving past a convenience store and seeing a crowd of high-school boys loitering in its parking lot. There are also a lot of wasps between the back door of the house and the garage during the day. Again, they've never actually attacked us, but surely it's only a matter of time before I come whipping around the corner of the house with a huge plant and upset somebody. And they've even shown up in the house once, which was a fun day.
That said, if you can observe them at a remove, like in photographs or something, they're kind of neat. Though that's true of a lot of things. 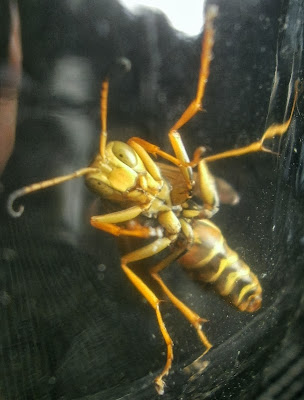 FANTASTIC post. I choose outside plants that are good for the local small animals (including insects) because I think it adds to the interest in the garden. Then again I AM known to be a weirdo biologist...

Stumbled onto your blogpost trying to identify a kalanchoe variety. I found a lot I have and some I have not. I seem to have started collecting them. I enjoyed your latest post and think I will follow. You kinda crack me up.

That moth was gorgeous! And the last jumper was indeed quite cute.

Jumping spiders are about the cutest things EVER. Great post.

You might try fennel next year in lieu of the dill, but don't plant them close together if you intend to consume them for your own food. I grew batches of swallowtails with just one clump.

Hi! I stumbled onto your blog when I was trying to find out about aloe plants. You have to much information in here! I will have to come back more often. This post on non-domesticated animals is great! And love your pictures of the butterfly on the cone flowers.