Well what do you know. Orange again. Notable differences from the other orange-and-white Schlumbergera blooms? Well. I mean. It's I guess kind of skinnier-looking than some of the other ones. A little. 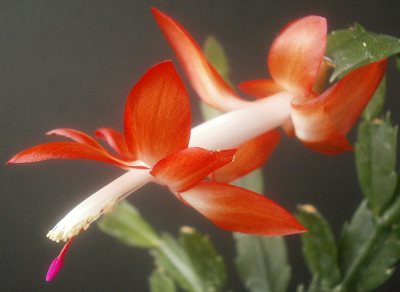 What did TinEye turn up for us this time? In order from least to most interesting:

French Open: tennis courts again. Plus very possibly a trademarked name or something, not that this would matter if it's just for my own personal code-naming, but still. Probably best not to get too accustomed to a name that I know I can't do anything with.

4th Floor: Ennh. Not even interesting enough to dismiss in an interesting fashion. Though the colors really do match up unusually well. 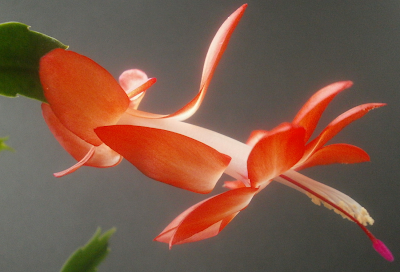 Mostly Family: I'm guessing that the title on this photo is actually the name of some collection of photos it's included in, and that it's a collection of photos which are primarily of the poster's family, but I like the idea of "Mostly" being a surname. You got your Donald Mostly, your Bonnie Anne Mostly, their daughter Marley Mostly, etc.

Bobble: I was not previously familiar with the word "bobble,"1 so I guess I've learned something.

Horse Blood Agar: And now I've learned another thing. Apparently microbiologists sometimes grow bacteria on agar plates which have been infused with animal blood. Why is it horse blood, and not, say, cow blood or pig blood (which I'd think would be more plentiful and therefore cheaper)? No clue. But now you know.

If you're easily disturbed by diassembled puppetoid robots, you should probably skip clicking the next link. 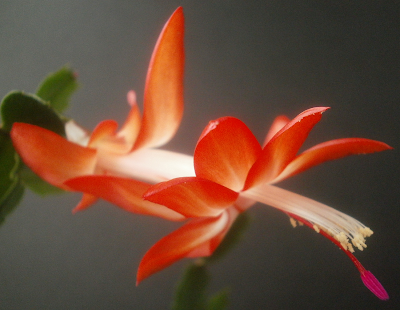 I disqualified "Jaws of Elmo" on the grounds that Elmo is red, so that name was forever going to make me think of a red flower, not orange, and it would be confusing. But I'm going to remember it, in the event that we end up with a red-blooming seedling sometime, 'cause that's really too good of a name to discard. 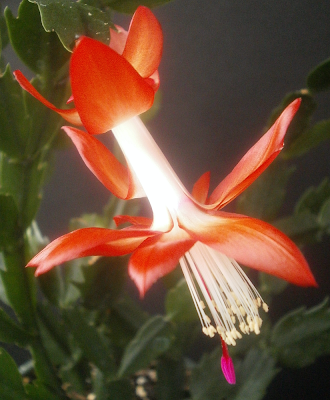 The winning name for this particular seedling, "Belevenissen," comes from this photo, which I believe to be the tour t-shirt for a Catholic youth choir (or possibly a women's choir?). As an isolated word, Google Translate and most other translation sites I found on-line say it's equivalent to "experiences," though Google renders "De belevenissen van het" from the t-shirt as "the adventures of," and one translation site came up with "vicissitudes." (!) If there are any Dutch speakers in the audience, feel free to provide a more definitive translation. Since I don't speak Dutch, I'll believe whatever you tell me, so amuse yourself if you like.

In any case, the meaning of the word seems sort of generic and not especially relevant to anything, but the word itself is sort of lovely (I feel like it should be the name of a line of shampoos and conditioners, for some reason), which is good enough for me.


1 I would ordinarily call these objects "pom-poms." Though I can't recall the last time I had to refer to one.
2 (The "poor man's Grover," if you will. Notable sentence from the Wikipedia article: 'Elmo has been referred to as the "Little Red Menace" by Sesame Street traditionalists.' Heh. #Grover4Lyfe)
Posted by mr_subjunctive at 3:00 AM

I don't know a lot of Dutch, but "belevenissen" seems to be the Dutch equivalent to German "Erlebnisse", which, yes, translates to "experiences" or "adventures". (As for the choir, "onze lieve vrouwkoor" literally means "our dear woman choir", and I suppose that like the German "unsere liebe Frau", that means Mary.)

It would sound a little... unfortunate for me as a shampoo/conditioner name, because in German, "Nissen" means nits (as in, the eggs of lice), and "belevenissen" sounds like "belebe Nissen", i.e. "revive nits". Not exactly what you'd want hair care products to do...

No, I suppose you wouldn't. Though I kind of like the idea of naming hair care products "Belevenissen" even more now.

Search for images of "bobble hat" if you want to see the bobble in its proper environment.

Levenissen is translated as "live events" by Google, "be" being some sort of verby prefix that changes a intransitive verb to a transitive one.

If you are kind of attached to French Open you could have fun with it and call the flower French Open Toed or Toes.

When i first saw it, before i read the article, i thought "electric Koi" don't ask me where that came from, i have no bloody idea, but i thought I'd mention it.