I had to dig pretty hard in TinEye to come up with anything interesting. Fish long enough, and you'll catch some weird stuff, though. 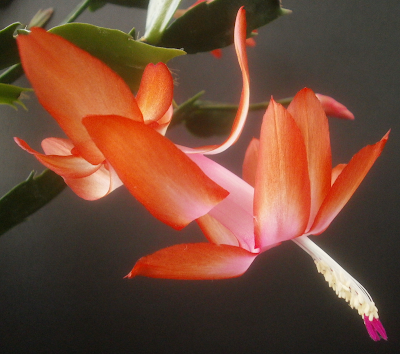 In order from least to most plausible:

Bruce Lee: I like the idea of naming a Schlumbergera -- or any type of flower, really -- after Bruce Lee, though it sort of seems like a darker color might be more, you know, appropriate.1

Spontaneous Combustion: I think the pink in the flower kind of ruins this option. I mean, orange fires are all over the place, but who ever heard of a pink fire? Not saying it couldn't happen, just that it's not the color scheme I think of for any kind of combustion, spontaneous or not. (Also I think the image text is stupid, though that wasn't a major consideration.)

Empty Church sounds uncomfortably like I'm trying to make some kind of Statement, even though I'm not. Google Translate renders the image text from Portuguese as "God only attends the empty churches," hence the name. That sounds like it's supposed to mean something, but I spent a solid ten minutes or so trying to come up with something plausible it might be trying to say and failed. Maybe a translation error. Maybe a failure of imagination on my part.

In any case, this almost works as a name -- I can even think of at least one church I've attended that had this exact color scheme -- but it just makes too little sense. 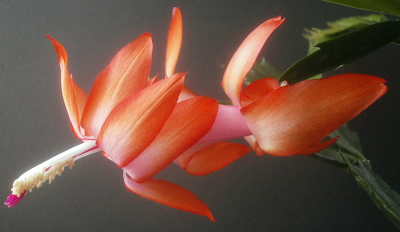 Moped Rally is interesting, insofar as I'm surprised at the existence of moped rallies. I mean, everything else has a group of dedicated enthusiasts, so why not mopeds. And there are almost certainly orange and pink mopeds out there somewhere. Workable, but I thought I could probably do better.

Cyborg Unicorn is what I'm going with, though it may not actually be better than "Moped Rally." At least some of the reason for choosing this is that it reminds me of the game "Robot Unicorn Attack." I am terrible at RUA -- like, no learning curve at all, I suck just as much the 100th time as I did the first -- but I'm amused by the idea. Plus I'm just gay enough that I'll take any excuse to listen to Erasure, I guess. So "Cyborg Unicorn" it is.


1 It's ridiculous that we as a culture gender colors, which after all are just different wavelengths of light, and the combinations thereof, and have nothing intrinsically masculine or feminine about them. Even so, I suspect my brain would rebel at trying to associate Bruce Lee with a partly-pink flower, so it's probably best not to try to force it to. Ugly things happen when my brain rebels.
Posted by mr_subjunctive at 3:00 AM

Love that name. In fact, I'm enjoying all of your discussions of naming and your quirky sense of humor.

Is there some hidden mysogyny in the reversal of roles? In the most primitive way. Higher is better and lower is inferior. Which could also be why being an effeminate male is seen as an insult. It's deeply embedded in our culture.