The other recent Schlumbergera bloom is prettier, I think, than seedling 111A "Morning Sun." We already knew that I'm kind of a sucker for this orange-and-pink combination.

Seventeen name possibilities this time, but it was easier to rule them out than it was for 111A. Combine only caught my attention because I just finished playing Half-Life 2 a little bit ago;1 it otherwise makes no sense for this. Bells and Angels is an interesting image, but the name is too long and has too little to do with anything. Tabletop isn't even an interesting picture, much less word. Elvis Special just doesn't seem like a flower name. A flower named Koala should really be gray, or gray and black, not orange and pink. Aerial is kind of a neat picture, but the name leaves me cold. Girls' Weekend seemed briefly interesting, but then the moment passed and I couldn't figure out what it was about the idea that had appealed to me in the first place. 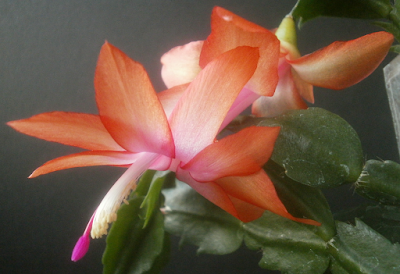 Sunset Mandala, Maine Sunrise, and Other Sun(s) are all perfectly reasonable names, but I just named a seedling after the Sun.

The photo for Roman Candle doesn't even contain a Roman candle, as far as I can tell, but even if it were, when I imagine a Roman candle in my head, it's green, or maybe red. Definitely not orange and pink.

American Biscuit amuses me. I won't go into it here, but "biscuit" means different things in American English and British English. The whole business is fairly complicated, plus changing all the time as cultures exchange ideas, but a good explanation can be found here if you're interested. The photographer seemed to be confused by the KFC ad in the photo ("a scone surely?"), but I'm assuming that the whole U.S./U.K. confusion is why the ad specifies that the photo depicts an American biscuit. None of this is remotely relevant to Schlumbergeras, but I was briefly amused by the idea of calling a Schlumbergera seedling "American Biscuit." And then that stopped being amusing.

Helium-Filled Heart appealed to me when I first saw the photo, but it's also a pretty long name, and there's nothing heart-shaped about the flower. Helium by itself is retained for consideration, though. 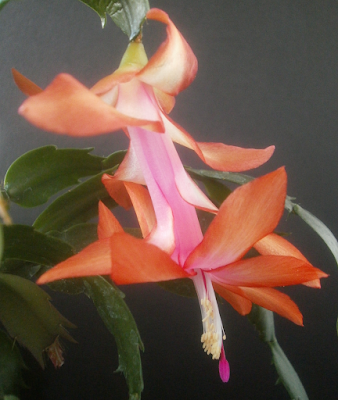 So we wind up with five possibilities, the aforementioned Helium, plus these:

I lived in Washington DC, long ago, for a very short time, and although I don't think I technically lived in the Dupont Circle neighborhood, it was my closest Metro stop, so it kind of felt like I lived there. The seedling has nothing to do with Dupont Circle, and neither does the photo, really (aside from, I gather, being taken inside some building in the neighborhood), but I don't know. Maybe?

Potential Energy is also a bit of a stretch, when it comes to seedling-naming, but there's something sort of energetic about the colors, and it at least doesn't seem like a ridiculous thing to name a seedling.

Dessert Room appeals mostly because I like the idea of having a house so large that there's a dedicated room solely for eating dessert, sort of the way some of the obscenely wealthy have rooms dedicated to gift-wrapping. Except that having a dessert room seems more practical, because one eats dessert once or twice a day, and how often do you really need to wrap gifts? The connection to the flower is tenuous, though the colors seem sort of fruity and sweet, and I'm sure I've seen desserts that color before.

Barcade is another idea that I can't believe never caught on. An arcade full of games that you can play while getting drunk? Yes please! I assume it never caught on because, when arcades were a common thing, video games were perceived as being for kids too young to drink, and now arcades are uncommon because the home video gaming market has removed the need for people to leave their home to play.2

My memories of Dupont Circle are mainly in gray, white, and brown, because I was there from November to January. Even during warmer times of the year, I doubt there's a lot of orange.4 Not that the other options are particularly color-appropriate either, but this seems especially bad.

No particular reason to go against Potential Energy or Helium that I can think of, but the more I ponder, the more I like Dessert Room. So that's what I'm going with.

We'll have to see what happens with the other Schlumbergera seedlings; Schlumbergera 091 and 082 definitely have buds developing at the moment, and 113 might (hard to tell at this point -- very very new buds look an awful lot like new stem segments), so there might be a few more yet to see and name. Several seedlings are trying to rebloom,5 too, which I probably won't post about unless the new blooms are obviously different from what's come before, but rest assured that I'm keeping track of which ones bloom well and will let you know about that when it's time to try to sell them. The first set of cuttings I took are beginning to produce new stem segments now, so it shouldn't be too much longer before I know which will be available.


1 The multidimensional alliance of alien species which is trying to take over the Earth and blah blah blah. The game is, of course, wonderful, which if you're the sort of person who cares about stuff like this, you probably already know it's wonderful, because I'm ten and a half years late to the Half-Life 2 party.
2 Though there are a few arcades still operating, plus hybrid establishments like Dave & Buster's, which combine a bar, restaurant, and arcade. I guess Dave & Buster's is doing well enough, but there are no Iowa locations, and even if there were, their website makes those locations look loud and full of assholes. So no thank you.
3 Perhaps a more appropriate name for places like Dave & Buster's, in the arcade-full-of-bros sense. Not so much in the fabric-containing-raised-designs sense.
4 Pink, maybe: it was and is a gay neighborhood.
5 022A "Sad Tomato," #023A "Stoked," #024 "Safety Vest"/"Bryce Canyon," #026A "Brick Wall," #027A "Kiln," #028 "Phil Collen"/"Neon Like," #030A "Diwali," and #031 "Baby Carrots," at the moment.
Posted by mr_subjunctive at 3:00 AM