I've thought I was done with the Schlumbergera seedling posts a few times now, most recently in mid-March, but I've seen blooms from another five seedlings, so I guess it's time to do one more round. Maybe once I finish with those, the seedlings will let me rest for a few months.

Schlumbergera 073A is, you know, okay. Orange / pink, not especially floriferous so far, hasn't really distinguished itself from the group. 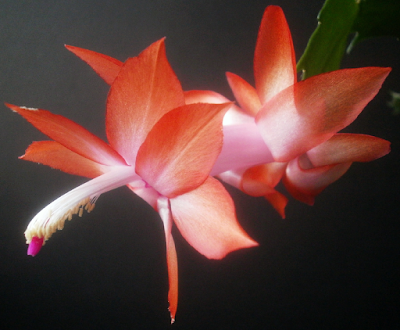 When I do these posts, I've taken to dividing the initial list of possibilities from TinEye into "maybe," "no," and "lol no" sets. The "lol no" group included "Mean Words," which I find almost appealing but was nevertheless obviously wrong, "Bio-Digester," which is somehow both even more appealing and even more wrong, and "Midland-Odessa," which if you've ever seen Midland-Odessa, Texas, well, you understand why it's not appropriate to name a pretty flower after it. "Midland-Odessa" is more of a Stapelia name. Something tan and xeric.1 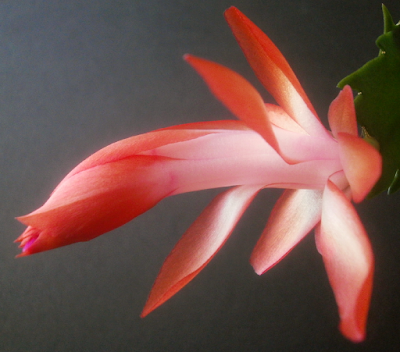 The "no" group were mostly either boring (Pre-Event, The Wave) or too non-sequiturish (Marrow, Polyglot) for me, and aren't worth listing in full.

Dopey: not really applicable. Ditto for Synthpop, Callejón (Spanish for "alley"), and Hellkitten.

Rhumba: too generic; it's conceivable that someone else might have named a Schlumbergera "Rhumba" already, or will soon. Also Heartthrob, Honeymoon, and Ballerina. ("Honeymoon" was not helped by the fact that the photo is of an undetermined animal's butt.) 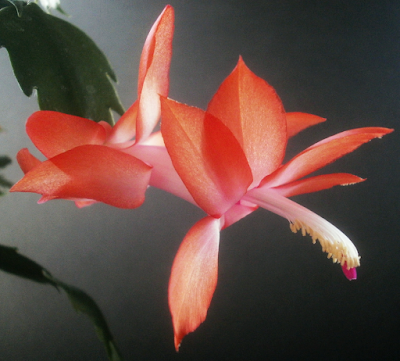 Which left me with five.

The picture for Cupcake (or Cupcake Graffito) isn't very interesting. "Cupcake" would be appropriate for pretty much any of the seedlings, and "Cupcake Graffito" doesn't make much sense. So never mind. Four. We're at four.

Omani Desert is a lovely photo, and a great color match, though not really quite the right part of the world for a Schlumbergera, which are all native to Brazil. Which makes me a little uneasy, enough so that I'll discard this too. (It's not like I won't be seeing the photo again.)

Not Enough Shoes has a nice story to go along with it, but is sort of nonsensical, plus long. So it's out.

Candy Box is a little generic, but the colors seem appropriate to the name and it's unambiguously happy. Unless one is diabetic, I suppose. So I'd consider it, except that . . .

Then there's Laurie Anderson. I love love love Laurie Anderson ("Babydoll" is probably one of my ten favorite songs of all time,2 and the first time I heard Big Science was all but a religious experience.), and the only objection I can think of is that orange and pink are not colors I normally associate with her. Which isn't enough.3 So "Laurie Anderson" it is. No contest.


1 And I say this as someone who did Spring Break in Lubbock, TX twice during college, and liked it. My message to Midland-Odessa would be, when you're comparing unfavorably to Lubbock, it's time to ask yourself, am I really trying as hard as I could be to be a pleasant place to live?
But seriously. Hop on Google Maps street view and look around Midland a little bit. I dare you to find something pretty.
2 Two others which are surely in my top ten: "Spark" (Tori Amos), "North Dakota" (Lyle Lovett). After that it starts getting hard to pick any out, but those three are undoubtedly desert island songs for me.
3 How likely am I to get a Schlumbergera that blooms in grayscale, after all?
Posted by mr_subjunctive at 3:00 AM

Lubbuck twice for spring break? Huh. I don't believe I've heard anyone else say that about Lubbuck.

Kinda hard to wrap my head around!

I was actually just terrible at Spring Break. My freshman and sophomore years, I went to Lubbock because a good friend was going to Texas Tech and that was basically the only time we could meet up. So I have some affection for Lubbock.

Junior year I went to Casper, Wyoming, which was prettier than Lubbock, but not otherwise an improvement.

The last two years (it took me five years to get a four-year degree) I just stayed in Waco, TX and didn't go anywhere. Which was okay.